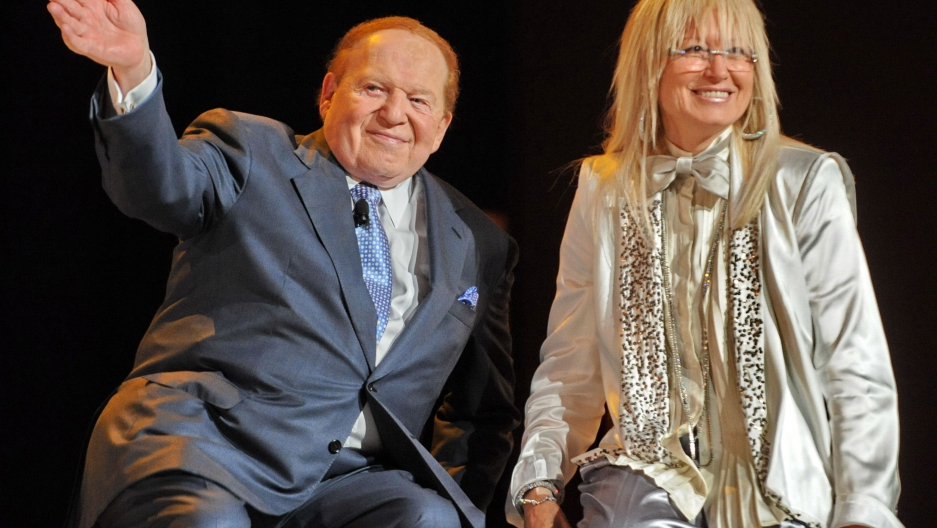 Miriam Adelson, an Israeli physician who married Sheldon Adelson in 1991, is to match her casino mogul husband's earlier $5 million donation to Winning Our Future, an independent group focused on securing Newt Gingrich's nomination by the GOP.
Credit: ROSLAN RAHMAN
Share

Dr Miriam Adelson, an Israeli physician who married her Boston-born casino mogul husband in 1991, will provide the money to Winning Our Future, an independent group focused on securing the former House speaker’s nomination by the GOP, according to the New York Times.

The Florida Republican primary will be held on Jan. 31. Earlier this month, Sheldon Adelson himself injected $5 million into the super PAC, the Washington Post reported, indicating at the time that he intended to spend at least another $5 million during the campaign.

According to the Los Angeles Times, the latest $5 million transfer came from a joint account and was signed by Dr Adelson.

Winning Our Future is one of a new breed of campaign committees that – being technically independent of the candidate – can legally accept unlimited donations, in the wake of the US Supreme Court’s landmark Citizens United ruling.

The Adelsons’ personal donations have reportedly been made to Winning Our Future without condition, due to the couple’s special loyalty to Gingrich since first meeting him in Washington in 1995, when they were lobbying Congress to approve legislation requiring the transfer of the US Embassy in Israel from Tel Aviv to Jerusalem.

More from GlobalPost: Israel's view of US Republican primary

In an address last month to a group of young Jewish adults visiting Israel as part of the Taglit-Birthright program, Adelson supported Gingrich’s claims on Jewish TV that Palestinians are an “invented” people, according to the Jerusalem Post.

Adelson is deeply involved in Israeli politics, owning one of the most popular Israeli newspapers, Israel Hayom, and providing staunch support to Prime Minister Binyamin Netanyahu.

His initial wire transfer to Winning Our Future financed a series of ads attacking Mitt Romney in South Carolina and helped Gingrich secure an upset victory there at Satuday’s primary.

However, Adelson’s wife has reportedly expressed a wish that the couple’s second contribution be used by Winning Our Future “to continue the pro-Newt message”, rather than financing negative ads attacking Romney, according to the New York Times.