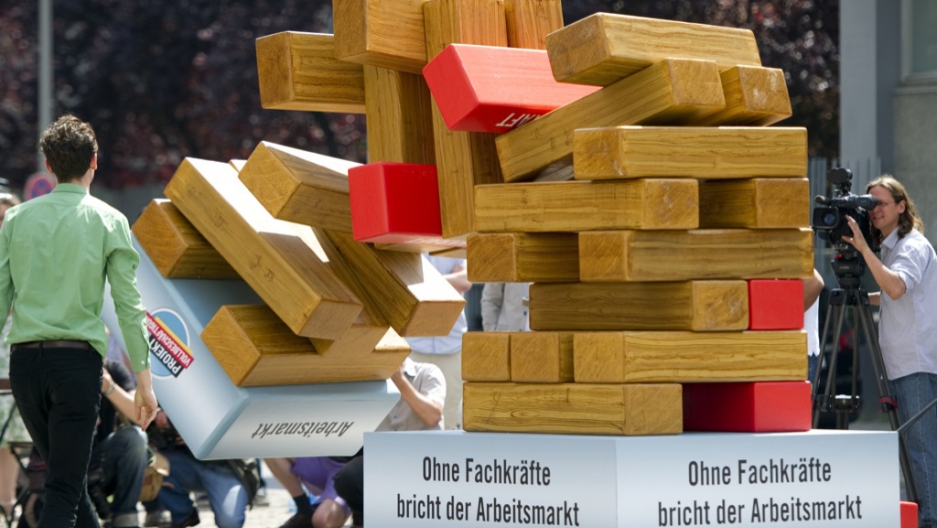 A tower symbolizing the labor market tumbles down after one of the red elements standing for skilled workers was pulled away on May 31, 2011 in Berlin. German unemployment fell to 7 percent of the workforce in May 2011, official data showed as the country continued to reap the benefits of labor market reforms and a global recovery.
Credit: Johannes Eisele
Share

BERLIN, Germany — Unemployment is rising in most European Union countries, as the effects of crippling sovereign debt crisis, and the austerity measures prescribed to tackle it, take their toll.

Yet the bloc’s biggest and richest member has seemed almost immune to the effects of the crisis, particularly when it comes to its labor market. While dole queues lengthen in Spain, France and Greece, in Germany they are rapidly dwindling.

In fact Germany has seen the number out of work decrease to its lowest level since 1991. It’s a remarkable turnaround.

While many other countries were booming before the crisis hit, Germany was dubbed the “Sick Man of Europe,” as it struggled to cope with the ongoing economic effects of reunification. In 2005 unemployment reached a peak of 12.5 percent, crucially exceeding the 5 million mark. Since then it has been almost halved, with a rate of just 6.6 percent in December 2011.

So how have German workers been left relatively unscathed by the crisis?

Experts point out that one of the most important factors is that Germany deployed a number of instruments to keep people in their jobs even during the most trying days of the financial crisis.

One was the government program known as “Kurzarbeit,” which allowed employers to significantly reduce workers’ hours, with the state stepping in to make up most of the shortfall in pay. Another was the so-called work-time accounts, whereby unions and companies agreed to let workers build up a bank of overtime that they could then use to take paid leave when there was a downturn in business.

The upshot was that companies held onto their skilled staff, allowing them to react quickly when demand picked up again. “As Germany’s competitiveness had already been relatively strong in the industrial sector before, it could very quickly react during the recovery phase,” explained Alexander Herzog-Stein, an economist with the Macroeconomic Policy Institute (IMK), a think tank with links to Germany’s trade unions.

Another element in protecting the German labor market from the vagaries of the crisis was that there was no real estate crash like that experienced in other European countries, such as Spain or Ireland. “We didn’t have this kind of property bubble on the domestic market that burst,” explained Karl Brenke of the German Institute for Economic Research (DIW), “so the consequences of the financial crisis were limited to exports.”

While these elements curbed unemployment, the picture is not uniformly rosy on the German jobs market. In fact, a host of measures adopted in the early part of the last decade to make the labor market more flexible and to tackle unemployment have contributed to a shift away from the steady, well paid unionized jobs of old towards more precarious and low-paid income employment. “The image of Germany as a country where everyone is paid well is a thing of the past,” Herzog-Stein said.

There is no general minimum wage in Germany. The temporary work sector has mushroomed. And many people, particularly women, have to resort to so-called “mini jobs” or “one-euro jobs,” which allow people to earn up to €400 (US $520) without losing their welfare benefits. In 2010, a total of 7.3 million Germans worked in these kinds of positions.

And while unemployment may be just over 6 percent, it is unevenly spread across the country. There is still, on average, almost double the number of people out of work in the former East Germany as in the West. Even within western Germany, the prosperous south far outshines the north.

“You have to look at the regions,” Brenke of the DIW argues. “You have relatively weak regions in West Germany and relatively strong ones in Eastern Germany, for example Saxony and parts of Thuringia. These regions could recover because they always had a strong industrial tradition."

Furthermore, the German economy has been marked by wage restraint over the past 15 or so years, meaning wages have risen far slower than in many other EU countries. The German Federal Statistics Office revealed in 2010 that private sector wages had increased by 21.8 percent in the decade between 2000 and 2010, compared to 35.5 percent for the EU as a whole. And if one looks at real earnings, then they hardly rose at all over the past two decades, seeing an actual decline between 2004 and 2008.

This has lead to sluggish domestic demand, which Germany has tended to neglect in favor of relying on exports to drive its economy. And a perversity of the current crisis is that with every bad piece of news about the euro zone that drives down the valued of the single currency, Germany’s exports become cheaper.

“In the current crisis the weaker the euro, the more attractive our products become,” Herzog-Stein says. At the same time, the euro crisis poses other dangers, he argues. “The big threat for the German economy is the lack of foreign demand from the other euro-zone countries.”

In fact the slump in that demand, due in part to austerity measures pushed by Berlin, is already starting to be felt in Germany itself. On Wednesday Berlin announced that it had slashed its forecast for growth in 2012 to just 0.7 percent.

Herzog-Stein advocates boosting domestic demand to offset the fall-off in exports. “Now, when things are going so badly in other countries, it will be really important that we get a domestic dynamic,” he says. It’s something that might also be of benefit beyond Germany’s shores.

“We are the biggest economy in Europe and one of the biggest in the world, and if Germany could show more dynamism, then everyone, including the US, would profit.”