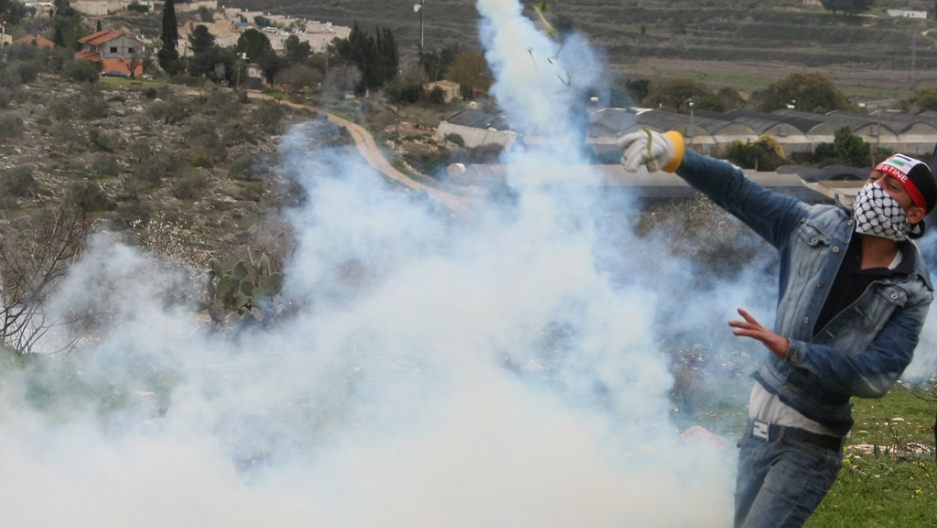 A Palestinian protester throws a tear gas canister back at Israeli soldiers during a demonstration against the expropriation of Palestinian land by Israel in the village of Kfar Kadum near the West Bank city of Nablus on January 13, 2012. AFP PHOTO/JAAFAR ASHTIYEH
Credit: JAAFAR ASHTIYEH
Share

Israeli prisons are being accused by a human rights organization of mistreating hundreds of Palestinian children arrested and held on offenses such as throwing rocks.

The Guardian has compiled a special report based on the evidence amassed by Defense of Children International (DCI) and corroborated by an Israeli human rights group B'Tselem.

According to the report, between 500 and 700 Palestinian children are arrested annually by Israeli soldiers for offenses ranging from throwing stones and molotov cocktails to in some cases being linked to banned militant organizations.

Around 9 percent of the 426 minors who gave testimony to DCI say they were held in solitary confinement for days or weeks, in narrow, dirty, windowless cells which violate the fourth Geneva convention and the international convention on the rights of children. They were also bound to chairs while being interrogated, sometimes resulting in confessions that they later said were coerced.

I was lonely, frightened all the time and I needed someone to talk with. I was choked from being alone. I was desperate to meet anyone, speak to anyone … I was so bored that when I was out [of the cell] and saw the police, they were talking in Hebrew and I don't speak Hebrew, but I was nodding as though I understood. I was desperate to speak.

Israeli newspaper Ha’aretz, in a separate report, said Human Rights Watch has pointed out serious violations of human rights in Israel and the Palestinian territories. Among the offenses listed were the blockade of the Gaza Strip, settlement expansion in the West Bank as well as executions carried out by Hamas.

More on GlobalPost: Gaza group launches Israel attack... though this time it's cyber

According to the report by Human Rights Watch, nearly 500 Palestinian homes were demolished in 2011, displacing 869 people, and 164 Palestinian minors were detained.

Watch the report by the Guardian: