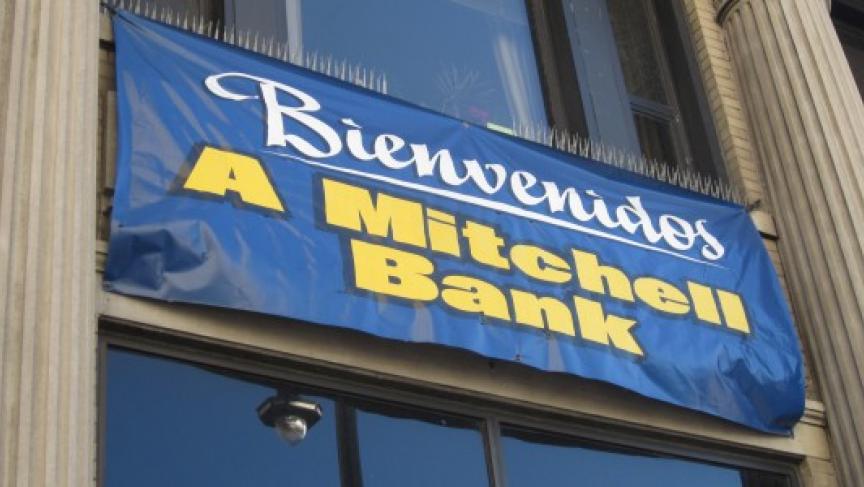 The sign over the door of Mitchell Bank welcomes, in Spanish, its newest customers. (Photo by Jason Margolis.)

Immigrant living in America can have a tough time getting a bank loan.

Many new arrivals don’t understand or trust the banking system. Even those that do, often don’t qualify for loans.

Some community banks are trying to change this dynamic — places like Mitchell Bank on the south side of Milwaukee.

Historic Mitchell Street was once a primary shopping destination on the south side of Milwaukee. Today, old signs above boarded up windows are some of the last reminders of a bygone era. The Mitchell Bank building has stood the test of time though. It’s been open for business at the corner of 11th and Mitchell since 1907.

This used to be a Polish and German neighborhood. Sometime in the 1990’s, the area became home to Latin American immigrants, mostly from Mexico.

James Maloney, chairman of Mitchell Bank, said the bank had a choice: follow the old customers going out, or cater to the new ones coming in.

“We debated that. And honestly a lot of people told us that because the neighborhood was becoming lower income, that we ought to relocate," Maloney said. "As a family we decided that the neighborhood had been good to us. We had been in the neighborhood for all these years and we just couldn’t leave, and that we would change, rather than try and change our clientele.”

Today, Mitchell Bank has large banners in front welcoming customers in Spanish. Inside the lobby, there’s a shrine to Our Lady of Guadalupe, the patron saint of Mexico. Maloney said he hires only bilingual staff, people like Jackie Martinez. She was born and raised in Milwaukee, but her parents are Mexican immigrants.

Martinez said many immigrants from Latin America don’t trust banks because of their experiences back home.

“They go in, open accounts, and all of a sudden the banks are not there anymore. Or they go in, they can’t retrieve their money, or fees have eaten up their money," she said. "So they’re saying, ‘It’s probably going to happen to me here in the U.S. I’m in a country that I’m not familiar with.’ So it’s our job to take them by the hand and say, ‘No it doesn’t work like that here.’ ”

Martinez holds workshops at local churches and community centers to explain how American banking works and the services they offer. At one point, Mitchell Bank opened a branch inside the local high school and hired students to work as tellers. Martinez said the students, who often have a better grasp of the language and culture here, were able to explain American banking to their parents.

“The first family that opened an account, our first year, brought money that was wrapped in aluminum foil," she said. Instead of having it at home in the fridge — I’m assuming if it was in foil wrap — they came and opened an account with us. I’m like, ‘Wow. You’re bringing it here, you’re trusting us.’ ”

Still, Mitchell Bank faces some stiff competition in the neighborhood. Neon signs advertising “checks cashed” light up Mitchell Street. At these locations, immigrants can also send remittances to their home countries. And they can easily borrow cash, but at an exorbitant interest rate. When annualized, those rates can easily reach 500 percent or more.

For many immigrants, though, check cashing stops are the easiest option, and the one they trust. You don’t need an American ID to use this service. That’s not the case at traditional banks.

“You need to have a taxpayer ID number or a social security number to have an interest-bearing account,” said Anna Paulson, the director of financial research at the Federal Reserve Bank of Chicago. “People might not have that document.”

Maloney estimates that 35 to 40 percent of the people living in the Mitchell Bank neighborhood are undocumented. His bank issues individual taxpayer identification numbers, which are sponsored by the IRS. He said Mitchell Bank was the first in the nation to grant mortgages to the undocumented.

Maloney is working within the law. Still, not everyone likes the idea of a bank providing loans to people who broke the law to come here.

“We get letters suggesting that I should be put in jail and things like that,” he said.

Maloney said he’s also been applauded for his work. From a banking perspective, Maloney said lending money to immigrants — documented or undocumented — has been a good bet.

“If the economy was good, it was the best loans that we made. Everyone paid on time,” Maloney said.

Prior to the recession, loans to immigrants, in general, were uncommonly stable.

“People have found that these immigrant customers have been really good at paying back loans,” Paulson said. “Maybe partly because they don’t have access to other sources of credit, so it’s a lot harder to run up the credit card bill, and run up the mortgage, and take out the home equity line of credit.”

Paulson said banks that lend to immigrant customers have, however, run into trouble as the economy soured in recent years. Maloney said that's been his bank's experience as well.

But, that’s been the case most everywhere, whether the borrower is a new arrival to America or not.