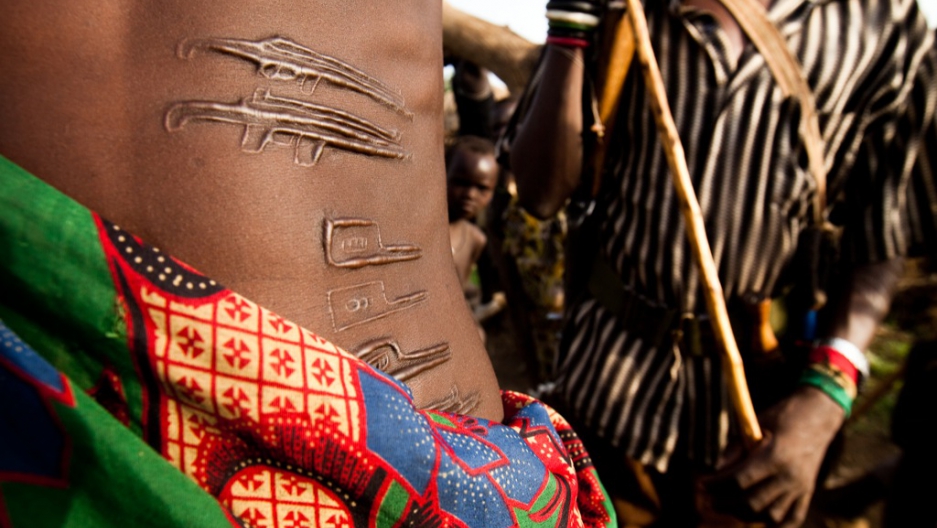 A Jie warrior with scars designed to look like AK-47s. He and his friend prepare for battle with the neighboring Murle tribe. Previous generations had scars representing wild animals and abstract symbols of power. Now, guns and satellite phones are common showing how deeply guns have become a symbol and tool for holding onto power.
Credit: Trevor Snapp
Share

PIBOR, South Sudan — Earlier this month 6,000 men from the Lou Nuer tribe armed with spears and guns left over from South Sudan’s decades of war marched through Jonglei state towards Murleland.

Jonglei state is a dry expanse of bushy trees in one of the most remote regions in Africa. In the rainy season, Jonglei is an impassable maze of swamps.

The Lou Nuer warriors were on their way to kill as many Murle as they could. Perhaps 500 to 600, but maybe more as the Murle had killed that number last year and they were also holding hundreds of Lou Nuer children hostage, raising them as their own.

Read more on GlobalPost: 51 killed in latest attacks in Jonglei

Since South Sudan won independence, on July 9, 2011,thousands have died in this tribal conflict and others across the new country.

The Murle, many of whom fought with the north during Sudan’s civil war have waged a near constant war against their neighbors. Many of these conflicts resolved themselves with only a few people killed, but the conflict with the Lou Nuer to the north has been escalating since the first attacks in 2006.

In what has become an annual tradition, Lou Nuer raiders march South, killing and stealing cattle as they go.

A few months later, Murle raiding parties respond by traveling north to do the same. Both sides blame the other for starting the conflict.

Read more on GlobalPost: South Sudan ethnic clashes must be solved in the long term

The death tolls, primarily of women and children, are often uncannily matched. The most recent attack before the holiday massacre was in August 2011, when Murle warriors killed at least 450 people. They were responding to attacks by the Nuer in June and April in which more than 600 Murle were killed.

Further exacerbating the situation is the Murle’s penchant for stealing children from other tribes and raising them as their own. The tradition began when a broker started bring unwanted children born out of wedlock from the Dinka tribe to the Murle where he traded them to lonely mothers for a few dozen cattle in the 1950s.

In the AK-47-inspired chaos of Sudan's civil war, this child adoption soon turned into Murle raids for children. Hundreds if not thousands of children from other tribes have been raised as Murle, and many of the most recent child abductions were from the Lou Nuer.

In recent years, the Lou Nuer have retaliated by abducting Murle children and hold hundreds hostage to this day. In the past, tribes at war had ways of resolving conflicts around cattle raids, but the abduction of children has raised tensions to a level in which peace appears increasingly difficult to return to. The fact that the revenge attacks often target innocent women and children is also a new development that was uncommon before 2006. These factors have turned what may once have been tribal clashes into a clear-cut war.

An estimated 6,000 Lou Nuer warriors marched into dozens of Murle villages last week, muddy AK-47s blazing. Entire towns were burned to the ground, and over 50,000 people were displaced, according to the UN.

Despite being under the watchful eyes of the UN, whose helicopters routinely monitor the violence from the air, the Lou Nuer killed anyone in their path. At least 100 were killed and bodies continue to be counted. Local officials claim thousands are dead.

The general death toll may well go higher. The Murle have already responded with multiple attacks killing at least 89 Lou Nuer since Jan. 8.