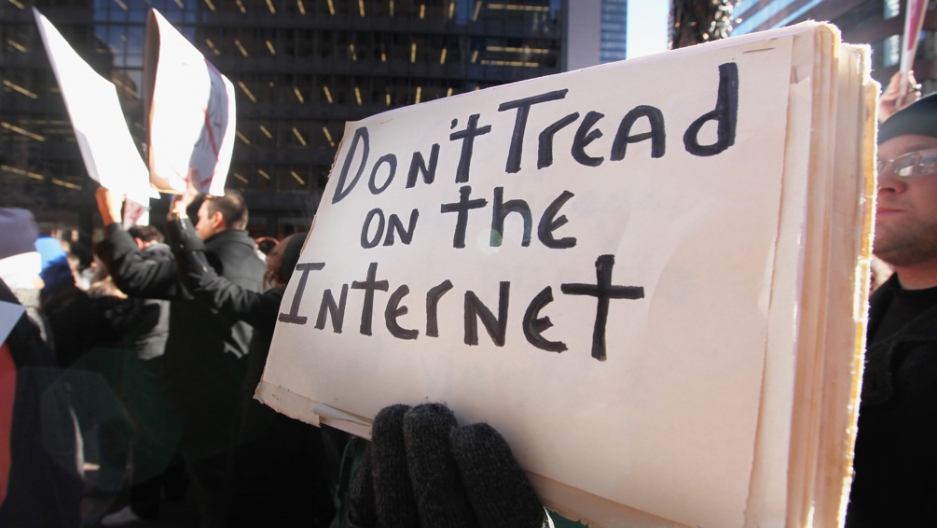 ATLANTA — In an unprecedented outpouring of online activism, internet juggernauts Reddit, 4chan and Wikipedia, as well as thousands of other websites, shut down Wednesday to protest the Stop Online Piracy Act (SOPA) and its senate equivalent, the Protect Intellectual Property Act (PIPA), an effort that many believe will save the soul of the internet.

Millions of users on social media sites like Facebook and Twitter spent the day raising awareness about the bills and letting their representatives know they stand in opposition to legislation they say would result in unjust censorship.

This culmination in online fury began months ago on Reddit and 4chan, among a handful of other sites, when users first vowed to stop the “death of the internet.” Activists affiliated with Anonymous, the much-talked about hacker collective, began launching operations against Congressmen who supported SOPA, while Redditors spammed the fax machines and inboxes of senators and representatives, and still others even took to the streets.

After months of coding, posting, hacking and calling, these internet activists finally made their mark on the White House and now, as lawmakers one by one begin withdrawing support for the bill as it currently stands, it seems the internet may have won.

More from GlobalPost: Has the internet become an interest group?

The White House announced on Jan. 14, on its blog of all places, that President Barack Obama had reservations about the bill and the risk it posed to lawful activity on the internet. The announcement came days after Reddit claimed a victory over Rep. Paul Ryan, a Republican from Wisconsin, who in part due to pressure from Reddit dropped his support for SOPA.

Lamar Smith, the sponsor of the bill, too began backing away from the legislation, saying he would remove a provision from the bill that would allow corporations who find copyrighted content on other websites to shut them down. Sen. Patrick Leahy, a Democrat from Vermont and the main proponent of PIPA, the Senate version, also admitted the legislation needed revisions.

But is the fight really over? Congress, which maintains that a law is still needed to protect copyrighted material from being pirated on the internet, will resume debate over the legislation in February and many internet activists say they still feel threatened.

Their concern is shared by the Electronic Frontiers Foundation, a digital rights group. While lawmakers have said they would remove the piece of the legislation that would allow internet service providers to block certain domains to their customers, which is called DNS blacklisting and is essentially what China does to censor the internet there, Electronic Frontiers says the bills still contain provisions that could be harmful to internet freedom.

More from GlobalPost: In response to SOPA, hackers target US government

“We are glad to see Sen. Leahy is recognizing, at last, some of the serious problems with this legislation. But a half-hearted promise to investigate the consequence of some of the provisions (which should have happened before this bill was even proposed) falls far short of what is needed,” said Corynne McSheery, an intellectual property attorney for the Electronic Frontiers Foundation in a statement on geek.com. “This bill, and its House counterpart, cannot be fixed — they must be killed.”

Activists still fear that SOPA and PIPA give too much power to individual corporations and to the Department of Justice, enabling them to file suit against entire websites, like Youtube and Wikipedia, for a single act of "intellectual property theft," even if the content is user-generated.

In what has been dubbed Operation Hiroshima, the hacker collective Anonymous is continuing its fight against SOPA and PIPA, employing a perhaps more dubious strategy.

Anonymous is now pressuring media moguls into making public statements against online censorship and anti-piracy legislation. To begin with, the group has posted personal information about Time Warner executive Jeffery L. Bewkes as well as Summer Redstone, head of Viacom and CBS, among others.

More from GlobalPost: Did the internet defeat Paul Ryan?

Using pastebin.com, the group has posted documents detailing contact for these moguls in the hope that like-minded “hacktivists” will use the information. Whether hundreds of pizzas are sent to their homes or their email accounts are accessed, the heat is now being turned up on not only lawmakers but businessmen and businesses as well.

After Wednesday's blackout, however, which included Wikipedia, leaving students and professionals around the world scrambling to find the encyclopedic information they needed, the issue of SOPA and PIPA entered the mainstream, a reality from which the legislation might not be able to recover.

Facebook was awash with posts decrying all forms of censorship on Wednesday and the internet activists who started it all said they are wary of statements made by politicians in an election year and intend to continue the fight until SOPA and PIPA become nothing more than a buried entry in a series of online archives.

"Each step the bills take forward is only fuel that counter reaction more. Unless SOPA / PIPA are taken off the table we are only going to grow and push back harder," said EquanimousMind, one of the many Reddit users behind Operation Pull Ryan and among those that are continuing the struggle against SOPA and PIPA.