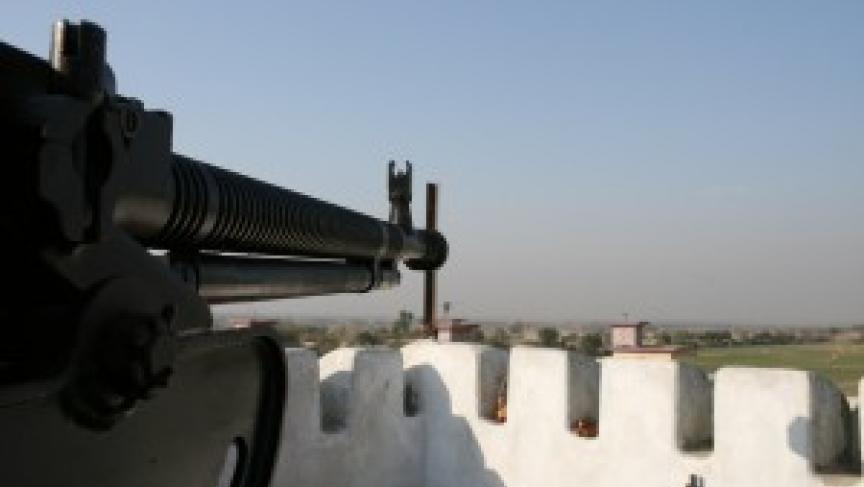 Gunmen are common in Pakistan. (Photo by Mustafa Qadri)

According to the Human Rights Commission of Pakistan, more than 1,400 people were killed in the city in violent incidents in the first eight months of 2011. In July alone there were 358 killings. And the violence is affecting businesses especially hard.

“They came with gunmen,” said Parveen Rehman, who heads a social development organization in Karachi. “Five or six went into the courtyard and they said that ‘today we will occupy this place no matter what.' "

Rehman said the armed thugs wanted to take over the group’s compound. Luckily, she said, a person in her organization knew someone more powerful. So they turned to him for help.

“He came and he said if you fire then we’ll fire many more rounds,” Rehman said. “So imagine, to save ourselves, we went to a bigger thug.”

This is by no means an isolated incident. Many organizations and businesses face similar problems. And it’s especially hard to fix because the violence goes right to the top, including city officials and political parties.

Karachi houses almost every different ethnic and political group in the country: Muhajirs, Pashtuns, Baloch, Sindhis, not to mention a range of Islamist groupings.

All of the different groups have political organizations that claim to represent them. And most of those groups have their own militias. Rehman said grabbing land brings lots of power.

“There is continuous battle over various segments of land in Karachi between various groups of people who I would not say are given sanction by any one political party; but who as a strategy align themselves with political parties,” Rehman explained. “And police and of course all the government departments and the elected members are all partners in this. Because the money involved is so much, that overnight you can earn so much more.”

It’s a strategic mix of politics, crime and business. Once a political party’s thugs steal land, it’s divided and illegally sold to others. And that creates an instant – beholden – constituency.

This phenomenon of “land-grabbing” exploits the weakness of state institutions, as well as the ever-increasing demand for housing not met by the government. About half of Karachi’s estimated 17 million people live this way, dependent on one private group or another for their homes.

“It could be housing, transport, drinking water, even electricity,” said Haris Gazdar, a political economist at the Collective for Social Science Research in Karachi. “Most of all, all of these activities are underpinned by informal systems of contract enforcement. So contracts were then enforced by private people, sometimes in collusion with government officials who had all kinds of side deals with them. So you had a situation where the private use of violence was legitimate.”

Add to the mix a massive influx of arms to Karachi during the wars in nearby Afghanistan, since the 1980s, creating what is referred to locally as the “Kalashnikov culture.”

And today, everyone in the city seems to be armed. There are twice as many private security guards in the city as police officers, not to mention tens of thousands of private weapons.

Faisal Subzwari is a government minister from the MQM, a party that represents the Muhajir community and which is often accused of using strong arm tactics. Subzwari denied that his party has its own militia, but he admitted to carrying a weapon. He called it only normal to be armed.

“It’s my lawful right to have licensed armed weapons and people must have them. Why? I am quoting you specific examples of inaction from the police’s part, politically motivated targeted killings, and politically motivated ethnic cleansing. If the government isn’t doing anything, rather helping out criminals and gangsters then in order to save my skin at least I would acquire a licensed weapon which is not a crime in Pakistan today,” Subzwari said.

So everyone is armed because everyone else in the city is armed. As political economist Haris Gazdar explains, trying to change this “arms race” will be extremely difficult.

“The major kind of gaps in urban planning and political management, and the existence of military governments over long periods of time have led us there,” Gazdar said. “And realistically we shouldn’t expect any political party to give up on this model on its own.”

And until that happens, expect the seemingly unchecked violence in Karachi to continue.