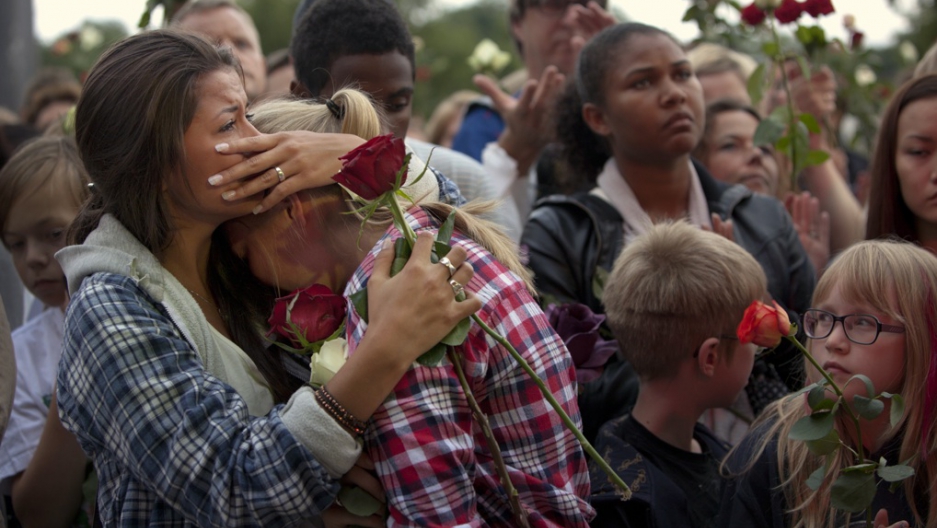 Mourners comfort each other at a memorial vigil in July, following attacks by Anders Behring Breivik.
Credit: Paula Bronstein
Share

MALMO, Sweden — The last known girlfriend of Norwegian mass killer Anders Behring Breivik has given her first interview about her experiences with the far-right terrorist.

The woman, a Belarusian who is now married in the US, told Norway's Dagbladet that she never suspected that her boyfriend was already planning last July's attack, in which he killed 77 people.

"I did not notice that he was planning something so cruel, I knew only that he never respected me," she said. "It is simply terrible. It is awful to think that we have had contact.”

Breivik met the woman, who the paper refers to as Natascha, on a dating site in 2005, and then travelled to see her in her home town of Minsk, before bringing her to stay with him in Oslo. According to Dagbladet he told his friends he believed she was a "gold-digger" interested only in his money.

"I was not a gold-digger. I wanted to see if we could make the relationship work, because we had met on the net," she said. "But we did not communicate well, and there was no chemistry. That's why it ended." She said initially she had been "excited" by their relationship.

"I was fascinated by this tall, powerful Norwegian. He was well dressed and from a nice neighborhood in Oslo," she said.

But even with her then-limited English, she soon realized that Breivik had little respect for women

"He was a male chauvinist," she said. "I felt that he did not take me seriously." In the manifesto Breivik released on the 22 July, the day he mounted his attacks on Olso's government district and a youth camp outside the capital, he is scathing about women.

He is highly critical of feminism, arguing that women should remain at home and concentrate on bringing up strong children capable of resisting what he saw as an invasion of Europe by the forces of Islam.