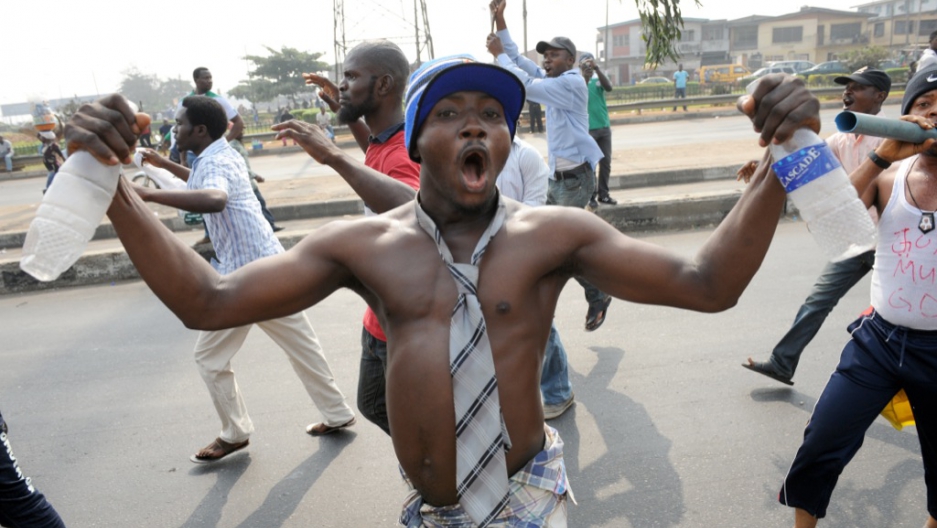 Protesters gesture and shout slogans on the fourth day of protest against the scrapping of oil subsidy at Gani Fawehinmi Park in Lagos on Jan. 12, 2012. Nigerian oil workers announced they would begin shutting down crude production as a nationwide strike and mass protests over soaring fuel prices pushed on.
Credit: Pius Utomi Ekpei
Share

ABUJA, Nigeria — Nigeria is at the brink, confronted by the double crises of angry protests against fuel price hikes and a deadly wave of Islamic extremist terrorism.

Each one of these is significant trouble for President Goodluck Jonathan's government. Together, as they have erupted simultaneously in the early days of 2012, they call into question the viability of Nigeria.

Against all odds, Jonathan may have pulled the nation back from the cliff's edge. His announcement Monday of a partial resumption of the fuel price subsidy appears to have quelled the worst of the anti-government protests. It also may have persuaded oil workers not to strike and halt Nigeria's production of oil.

It remains to be seen whether Jonathan can produce an effective resolution to the Islamic extremist violence of Boko Haram.

Under the banner of Occupy Nigeria, tens of thousands of Nigerians protested for five straight days last week against the government’s decision to remove fuel subsidies.

Economists agree that the fuel subsidy was a huge drain on the economy, costing Nigeria at around $8 billion annually, and that it played a large part in discouraging foreign investment in local refineries.

Nigeria produces more than 2.2 million barrels of crude oil a day, but almost all of its petroleum products are imported as a result of years of mismanagement, corruption and violence at its refineries. Oil marketers are given the incentive to import more than they need, and the cheap gasoline is siphoned off and sold in neighboring countries that do not have subsidized fuel.

Since the removal of the subsidy on Jan. 1, the cost of food and transportation has significantly risen in a country where most people live on less than $2 a day.

Shops, public offices and markets shut and the vast majority of flights were cancelled during the strike, which early estimates suggest has cost the economy billions of dollars.

Angry over losing one of the few perceived benefits of being in an oil-rich country, Nigerians protesting nationwide expressed a deeper frustration with years of government corruption and profligacy.

“What we need in Nigeria is to have communal spirit to fight this fight. It’s not about removal of the subsidy any more. It’s now about good governance and fighting corruption. We are saying that government should cut the cost of governance,” said protester Samuel Ademu, a government worker.

At least 10 people were killed during the demonstrations and hundreds were injured.

President Jonathan is already under pressure to control an uprising by radical Islamist sect, Boko Haram, which is responsible for the recent wave of terrorist violence. Boko Haram, meaning “Western Education is forbidden,” carried out a suicide bombing which killed 25 people in the UN headquarters in Abuja in August. Several attacks over the Christmas holiday, including on a Christian church and a beauty salon, killed more than 20 people.

The frequency and sophistication of the violence has led many to believe that Boko Haram has support from international terrorist networks including the North African branch of Al Qaeda, known as Al Qaeda in the Islamic Maghreb, and Al Shabab in Somalia.

At first, Boko Haram began fighting for the wider application of Shariah law in Nigeria but it has shifted its focus slightly, according to local analysts.

“The bulk of the militants are more local in their grievances and their objectives, which include the corruption of local politicians, the perceived heavy-handedness of the security forces, the broad shift of economic and political power from north to south and the widening generational divide between the northern cultural-political establishment and the northern youth,” says Ashley Elliot, Nigeria analyst at Control Risks.

Parts of northern Nigeria are said to be years behind the oil-producing south, both economically and educationally. Boko Haram began in Maiduguri, Borno state, the poorest region in the country. It's also now the epicenter of the extremist violence.

President Jonathan has struggled to get a grip on the situation due to the amorphous nature of the group. He claimed that Boko Haram had infiltrated his government.

"Some continue to dip their hands and eat with you, and you won't even know the person who will point a gun at you or plant a bomb behind your house," he said.

The spate of coordinated attacks on Christmas day prompted the Nigerian government to declare a state of emergency in several northern provinces in Nigeria, deploying vast numbers of police and military.

“A military and political solution is required … the political solution will require not only concessions to the northern elite but also a concentrated effort to improve the economy in the region,” says Kayode Akindele, partner at the Lagos-based investment firm, 49 Parallels.

Already under fire for failing to quell the Islamist insurgency in the north, the backlash to the fuel subsidy removal was a serious setback for Jonathan.

Jonathan's misjudged attempt at reform was costly, provoking angry protests and the threat of a strike to stop oil production. Jonathan's backtracking on the fuel subsidy may have quieted the demonstrations, but it remains to be seen whether his authority with the people has been permanently damaged.

It is Jonathan's first real test since the beginning of his tenure. He may still have a chance to address Nigeria's rampant corruption and mismanagement.

If Jonathan is able to push through the reforms needed to alleviate the poverty in the country driving these issues, he may be able to redeem himself before his time is up in 2015.

However, after decades of shattered promises, Jonathan will need more than good luck. He will need astute determination to convince the population that the Nigerian state can be an agent of development.