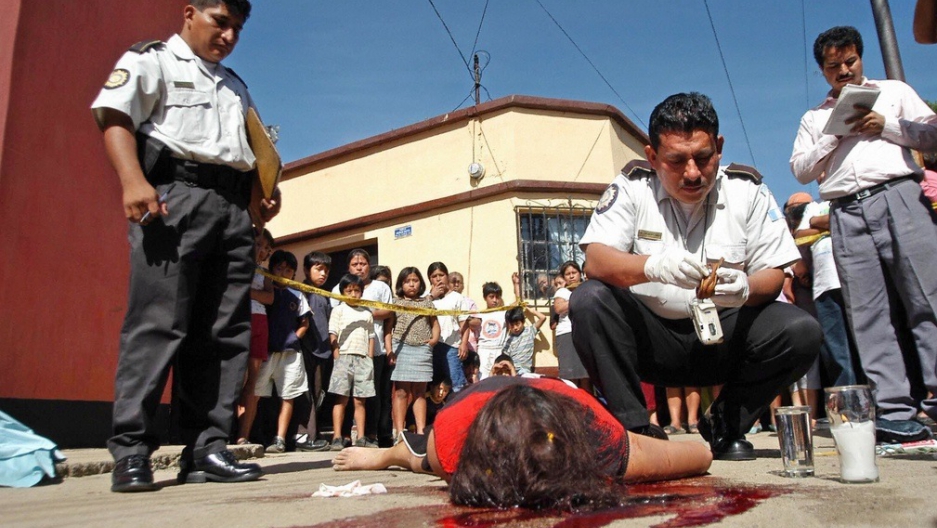 A victim of a street gang in Guatemala.
Share

LIMA, Peru — Guatemala may be facing a violent escalation of the drug-war ravaging the country.

New President Otto Perez Molina has promised to deal with the cartels with an “iron fist." But will it work?

If Perez Molina, a conservative retired army general, is true to his word, Guatemala could end up repeating the experience of its larger neighbor Mexico, where nearly 50,000 have died since President Francisco Calderon took a strategic decision to meet the narco-traffickers’ fire with fire in 2006.

“It is very probable that if the cartels feel threatened, they will respond with more violence. That risk is inevitable,” Francisco Jose Jimenez Irungaray, a security expert and former interior minister under the previous president, Alvaro Colom, told GlobalPost.

The situation in Mexico has become so dire that some now question the legitimacy of Calderon’s administration. Human-rights activists are even attempting to have the president tried at the International Criminal Court for abuses carried out by police and the military as they confront the drug gangs.

“If the violence increases but there are no solutions to Guatemala’s other problems, there is a real risk of a loss of legitimacy of the democratic system,” added Jimenez Irungaray.

Guatemala already has one of the highest murder rates in the world, with 41 murders registered per 100,000 residents in 2010, according to the United Nations. To put things in perspective, that is more than double Mexico’s toll.

In recent years, Guatemala has become a major staging post for the cocaine traffickers, as they bring their product from the Andes to market in the United States.

At his inauguration on Saturday, Perez Molina warned that one of Mexico’s most ferocious syndicates, the Zetas, was seeking to monopolize the drugs trade in Guatemala.

The fine details of the new president’s crackdown have yet to be announced, but he also said at his inauguration that he would be using the army to help “neutralize” the threat from the cartels.

That has raised concerns among human-rights advocates.

“The use of the military for police functions is something that we are concerned about,” said Amnesty International USA’s Guatemala country expert Matthew Kennis. “We don’t believe that is the way to go.”

Nevertheless, the military, including the Kaibiles, an elite commando force that has been accused of massacring civilians, is already involved in law enforcement in some of Guatemala’s more troubled zones. The question now is how that participation might increase.

Separately, Guatemala’s police force, riddled with corruption and frequently accused of ineptitude, will need improved training in a range of issues from forensics to human rights.

“If you don’t change the police and get rid of their reputation for corruption, it is inevitable the military will become even more involved,” said Jimenez Irungaray, who now works with the Central America program of Interpeace, a Swiss-based conflict resolution organization affiliated with the UN.

He also cautioned against the new government focusing all its efforts on the Zetas and other drug traffickers.

Although they are responsible for an estimated 40 percent of violent crime in Guatemala, that leaves another 60 percent without any direct connection to the drugs trade.

Guatemala remains deeply scarred by the vicious internal conflict that wracked it from 1966 to 1996, in which an estimated 200,000 people died.

Generations have been psychologically traumatized and, in some cases, the victims are now repeating the cycle of violence. Meanwhile, the country remains awash with guns, and street crime plagues Guatemala City and other urban centers.

Yet some question Perez Molina’s credentials for tackling this problem — and pulling Guatemala away from its current path towards becoming a failing state.

Amnesty’s Kennis notes how the retired general commanded a base in the region of Quiche in the early 1980s, as some of the civil war’s fiercest battles played out. He added that Amnesty had no evidence to connect the president to human-rights abuses, but said the group was continuing to investigate his past.

Another key question is over the fate of Claudia Paz, the attorney general appointed by Colom to improve Guatemala’s human-rights record. She has been instrumental in starting to finally hold the police and armed forces to account for abuses committed against civilians and suspects alike.

Perez Molina has said he intends to keep her on for the time being — but there is uncertainty for how long, and when she goes, whether the president will attempt to replace her with a prosecutor who fails to vigorously pursue murderers and torturers in the ranks.