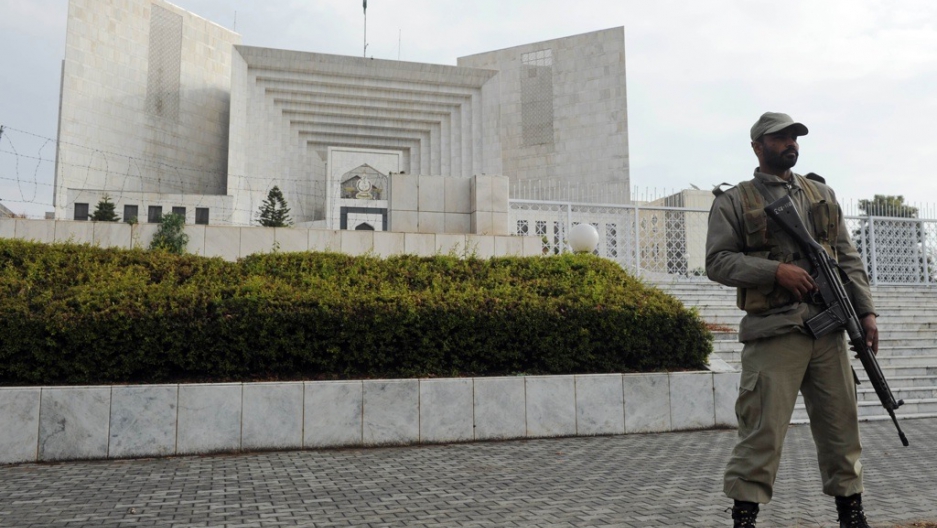 ISLAMABAD, Pakistan — The ongoing political saga that has gripped Pakistan in recent months took yet another turn Monday when the country’s Supreme Court summoned the prime minister for contempt of court.

The move brings the country’s executive branch and its judiciary, which some believe is quietly being supported by the country’s powerful military, closer than ever to a direct clash, the result of which could be the collapse of the current civilian government.

Prime Minister Raza Yousaf Gilani now has to explain later this week why his government hasn’t pursued investigations against 8,041 bureaucrats, politicians and political operatives accused of everything from corruption and money laundering to murder.

More from GlobalPost: Is Pakistan's military conspiring to take over civilian government?

President Asif Ali Zardari is the highest official facing charges. The Supreme Court has demanded that Gilani write a letter to Swiss authorities to reopen cases that involve corruption charges against Zardari. Gilani said that as president, Zardari enjoys immunity.

When Gilani faces the court, most likely on Thursday, he will have to choose between risking his position and selling out his political boss — Gilani is a member of the ruling Pakistan People’s Party (PPP), of which Zardari is the co-chairman. Legal experts say that Gilani will automatically lose his position in the assembly and his position as prime minister if he is found guilty of contempt.

The court’s ruling was no surprise, said Ahmad Bilal Mehboob, the executive director of the Pakistan Institute of Legislative Development and Transparency.

“It, I think, is the natural outcome of what has been happening over the past many months, because ultimately it is the chief executive who is answerable about lack of action on orders made by the Supreme Court,” he said.

Ayaz Amir, a columnist and lawmaker from the opposing Pakistan Muslim League-N party, said Thursday could spell a lot of trouble for Gilani. “They’re on a collision course and I think the ruling will be against him and we’ll probably have to look for another prime minister,” he said.

But Mehboob said Gilani still had a chance to avoid conviction if he implements the order and says he’s sorry.

“Then the most likely action by the Supreme Court is that they will accept that and will not go any further. But if the prime minister continues with old line of somewhat defiance, I have no doubt the Supreme Court will declare him convicted,” Mehboob said.

Zardari and the 8,040 others accused were exempted from further prosecution in 2007 after a deal between Zardari’s wife Benazir Bhutto — who was killed in a political rally later that year — and the then-president Gen. Pervez Musharraf. The deal, a piece of legislation called the National Reconciliation Ordinance (NRO), enabled Bhutto to return to Pakistan without fear of facing charges, which she said were politically motivated.

In 2009, however, Pakistan’s Supreme Court ruled the deal was unconstitutional and ordered the cases reopened. But the government did not pursue them.

The Supreme Court’s tenacity in pursuing the reopening of the cases has been lauded by some, and raised suspicion in others.

“The NRO was a very bad law, especially in the context of the campaign against corruption. It condoned corruption. So declaring NRO illegal is a good thing,” Mehboob said. “It will probably help rule of law in the country, which is very weak and very poor at the moment.”

Pakistan last year ranked 134 out of 182 countries — with one being the least corrupt — on the corruption index of Transparency International that measures perceptions of corruption in a country.

But others find the Supreme Court selective in the way it chooses its battles. “It is perceiving some cases with exceptional rigor and there are some cases that it is not touching at all,” Amir said.

A confidante of Zardari, who asked to remain anonymous, said the court’s vigorousness is revenge for the president delaying the reinstatement of Muhammad Iftikhar Chaudhry, the chief justice of the Supreme Court, in 2008. It was then that the PPP first came into power. Gilani reinstated Chaudhry in 2009.

The Supreme Court heard another case on Monday involving a memo allegedly written by Pakistan’s government asking for Washington’s help in preventing a military take-over of Zardari’s administration. In exchange for US help, the memo offers to restructure Pakistan’s national security so it is more favorable to the United States.

The main witness, Mansoor Ijaz, an American businessman of Pakistani origin, however, failed to appear at the hearing.

Memogate, as the case is dubbed here, highlights longstanding tensions between the government and Pakistan’s powerful military. While the military already had little trust in Zardari, the memo aggravated the feeling.

Analysts say that the army is not interested in an over military coup because few, if any, mainstream political parties would to support it. But it surely wouldn’t mind if the Supreme Court did the job of ousting the current the government for it. Some suspect the two institutions are working in cahoots.

In an attempt to strengthen the embattled government, Gilani presented a pro-democracy bill on Monday evening. It was voted in favor for, but that is only a temporary sigh of relief for the government.