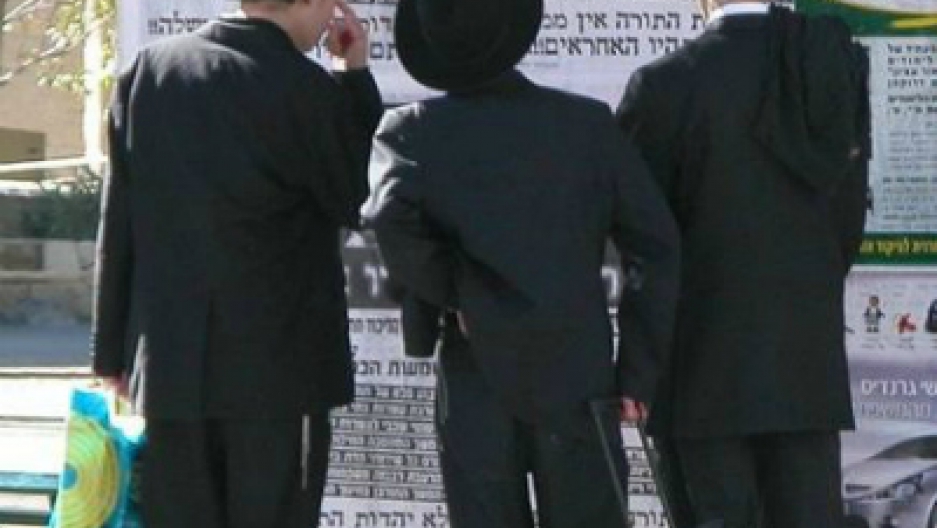 Three Haredim youth read a traditional publication posted on a wall in an orthodox community in Israel. (Photo by Effib, via Wikimedia Commons, cc-by-sa.)

There's a deep divide in Israel — and it's not between Israelis and Palestinians.

Rather, it's among Israel's Jewish population, between the ultra-Orthodox and the more moderate sects of Judaism.

The tensions came to a head three months ago when an Israeli doctor, a woman, being awarded a pediatric prize was told she would have to sit at a table separate from her husband and would not be able to appear the podium to accept her award — all because the acting health minister was an ultra-Orthodox and insisted on the event adhering to the standards of the ultra-Orthodox community. The doctor, a professor of pediatrics, Channa Maayan, took the slights in stride, but the outrage from the more secular parts of Israeli society was swift and pointed.

The situations has only deteriorated. In the intervening weeks, girls have been spit on while walking to school for not dressing with "proper" levels of modesty. At another conference, the Times reported, this one on women's health and Jewish law, women were not allowed to speak. Women's faces have been blacked out on billboards.

"The vast majority of women are going about day-to-day life and not being affected," said Isabel Kershner, a reporter for The New York Times in Jerusalem. "But there has been a build up in the last few weeks and months of this kind."

An incident in the Air Force recently, which led to the resignation of the chief rabbi, was seen as a warning sign that tensions may be boiling over into mainstream Israeli society.

"There's a definite feeling that there's an attempt by a fairly small and extremist group among the ultra-Orthodox to impose more on the public space," Kershner said. "That's what's causing the friction."

Kershner has been chronicling the national debate in Israel and compared the debate between Jewish sects to the tensions and debates going on between secular political parties in Egypt and Tunisia and their Islamist and more conservative foes.

The Haredim, the proper name for the ultra-Orthodox sect, have achieved remarkable national power in what is otherwise a moderate, western-style Democracy. Most of that has been achieved through concessions by major political parties — some granted at the formation of Israel, when the Haredim were expected to die out, others granted more recently by parties looking to win support at the polls.

"The ultra-Orthodox community is certainly growing in numbers, and therefore the electoral power is growing and on the rise," Kershner said. "It's a very young population. There are very small segments of it that are anti-Zionist to the point they don't participate in elections. The majority now do."

Their electoral power, while growing, already plays an outsized role in politics because of the coalition-nature of the Israeli Knesset, Kershner said. In order to form a government, the plurality parties typically need to engage with the Haredim to form a government.

Idit Karni, a mother of four, in Jerusalem, thinks it's easy to overlook the extreme complexity of the debate that is going on in Israel. Karni has been leading a campaign to bring women to the front of the public consciousness.

"We're free to do whatever we want. It's not as extreme as it seems," she said. "We're just addressing two specific issues."

One is a minority of extremists trying to impose their views on the public space. And the other is self-censoring, which is really and outgrowth of the first issue.

"We don't agree that the different advertising firms will choose to exclude 50 percent of the population just because, for economic reasons, it makes more sense to exclude them from advertisements in places with higher populations of ultra-Orthodox," said Karni.

Rachel Liel, Executive Director of the New Israel Fund, said this issue of inequality for women is part of a broader issue in Israel: the democratic recession in Israel.

"We used to take pride in being the only democracy in the Middle East," she said. "If you have been monitoring what has happened in Israel in the last year or two, you would see a bombardment of anti-democratic proposals in the Knesset."

Liel said there have been attempts to limit the power of the Supreme Court, to silence the media and to stop funding for human rights organizations.

"I see this women issue as one piece in a much bigger puzzle," she said.

Liel is worried that the issue, while limited now, is on the verge of snowballing into something truly devastating to Israeli society.