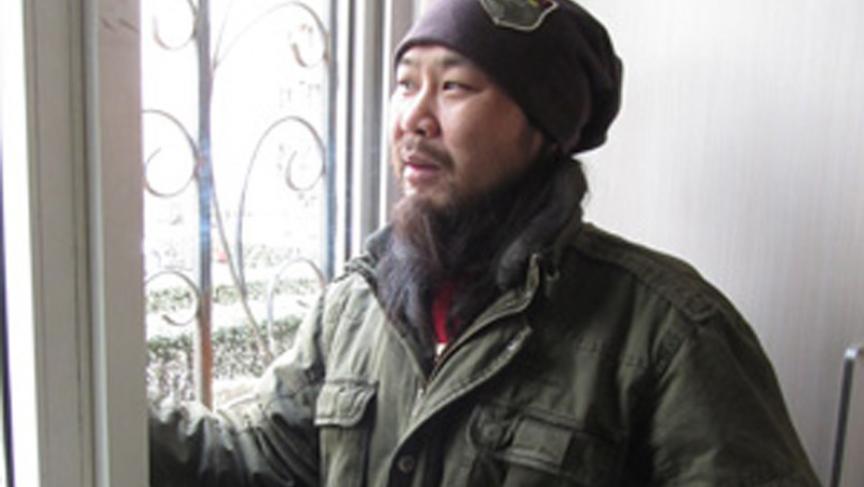 Chuanzi is among the Chinese artists using humor to question the policies of the Chinese government. (Photo by Mary Kay Magistad.)

A funny thing happened on the way to China going online — well, maybe not funny, so much as inevitable.

“When the situation is getting tougher, the humor is getting stronger. That has been always the case,” said Xiao Qiang, who runs China Digital Times, a website that follows news and web trends in China.

He said in this past year, as Chinese authorities have tried increase control of the Internet, in the wake of pro-democracy revolutions in the Middle East and Northern Africa, China’s online humor has, if anything, gotten sharper.

“Especially when it comes to political and social matters, where there’s always a sense of repression there, speaking truth to power requires a lot of courage, and there’s risk involved,” Xiao said. “But humor can smooth that out.”

When two high-speed trains collided last summer, former journalist Liu Dongdong took a Chinese rock classic and rewrote the lyrics to create a satirical critique of government mismanagement — of the high-speed train project, and of the accident.

The song drew millions of hits.

“These days in China, people are under a lot of pressure, and sometimes they feel helpless,” Liu said. “I hope doing these songs helps relieve some of that pressure – and maybe even gets a little attention from the authorities so they do something about the problems.”

Figuring out what you can say online, and when, is a little like surfing, according to Liu – you catch a wave and ride it in while you can. You get your spoof out before the authorities realize what it is and take it down.

Another satirist who knows that drill goes by the name Crazy Crab. He's not sure if the authorities even know his real name.

“If they don’t know, I’m sure they’re trying to find out," he said.

Crazy Crab draws an online cartoon inspired by George Orwell’s “Animal Farm.” His is called Hexie Farm. Hexie can mean crab, or harmony. The Communist Party’s stated desire is for a “harmonious society” – that is, one without challenge to its rule. Hexie Farm is run by a Party, too, which is trying to usher in a “great, glorious and correct” era of harmony. Crazy Crab considers it a badge of honor that Hexie Farm is now a blocked search term in China.

He said China’s leaders don’t really have a sense of humor.

“If they do, I can’t see it,” he said. “Their humor is unintentional; it comes from the absurd contrast between what they say and what they do.”

Xiao agrees that the system doesn’t really breed leaders with a sense of humor, or even an individual sense of style. And yet, those leaders ignore political humor at their peril, especially from China’s younger generation. Xiao said that generation expects more from its leaders.

“They want more freedom, and humor, in the basic sense, is to carry a message,” Xiao said. “That message, in the political humor, is no less than demanding a freer society, a more equal and just society, and pointing to the fact that the power in China today is unaccountable to its own people.”

Yet many of those coming up with snarky satire don’t really believe the system will change anytime soon.

Chuanzi, a folksinger who has written songs about how the middle-class dream is out of reach for many, counts himself in that group.

“I make fun of the difficulties we face in life. We can try to change our lives, but we can’t change the system,” Chuanzi said. "I’m too small and weak. But if we stick together, musicians and other artists, maybe we can make some change to society.”

Chuanzi’s agent, who was sitting nearby, didn’t like the direction the interview was taking. Artists like Ai Weiwei got arrested for using humor to push for social and political change – although, much more aggressively and persistently than Chuanzi is doing here. The agent cut off the interview and said any further questions would have to be submitted in advance — the same ground rules for talking to a Chinese government official.

A good satirist would have a field day with this.