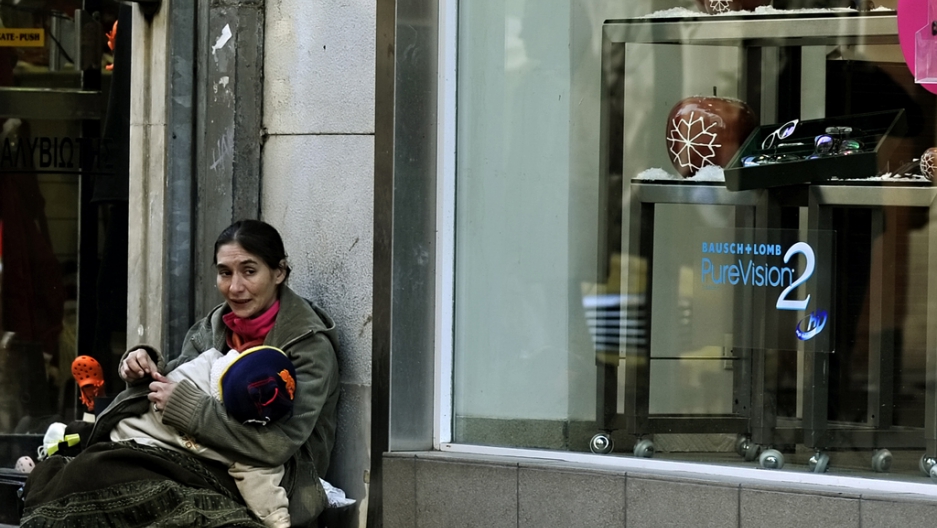 A woman holds her child as she begs outside shops displaying Christmas offers in central Athens on December 9, 2011. Greece's economy remained trapped in a deep recession in the third quarter but shrank less than previously thought, at a revised 5.0 percent from an initial 5.2 percent, official figures showed today. AFP PHOTO / LOUISA GOULIAMAKI
Credit: LOUISA GOULIAMAKI
Share

The economic crisis in Greece is beginning to take its toll in alarming ways. The BBC published a story today recounting how some Greek families are giving away their children because they are now unable to take care of them.

Charities, churches and schools have reported cases of parents leaving their children at the doorstep, sometimes with a note, but mostly with no explanation.

Father Antonios, an Orthodox priest in Athens, told the BBC:

Over the last year we have hundreds of cases of parents who want to leave their children with us - they know us and trust us.


They say they do not have any money or shelter or food for their kids, so they hope we might be able to provide them with what they need.

In late Dec. 2011, the Guardian reported on the Gasparinatos family. The parents made the tough decision to put four of their 10 children into care after struggling to support the family on Dimitris Gasparinatos’ 960 euro salary and 460 euros of welfare aid.

Charities such as SOS Children's Village and The Smile of a Child are accustomed to taking children into care from abusive households says the BBC, but now they are seeing parents who love their children giving them away to ensure a more secure future.

Ilias Ilioupolis, the general secretary of the civil servants’ union called ADEDY, told the Guardian, “People are going hungry, families are breaking up, instances are mounting of mothers and fathers no longer being able to bring up their own kids.”

More on GlobalPost: Greece warns it could exit the euro

This is not the first social consequence to emerge from Greece’s deep economic recession. The economic crisis sweeping through Europe has already caused the suicide rate in Greece to jump, doubling from the lowest rate on the continent of 2.8 per 100,000 inhabitants, according to an earlier report by the Guardian.

The crisis has also turned immigrants into scapegoats, with the United Nations High Commissioner for Refugees’ Greek head Giorgos Tsarbopoulos stating, “"In times of social and economic instability it is easy to look for scapegoats... The state and the Greek society should show zero tolerance towards racist violence."