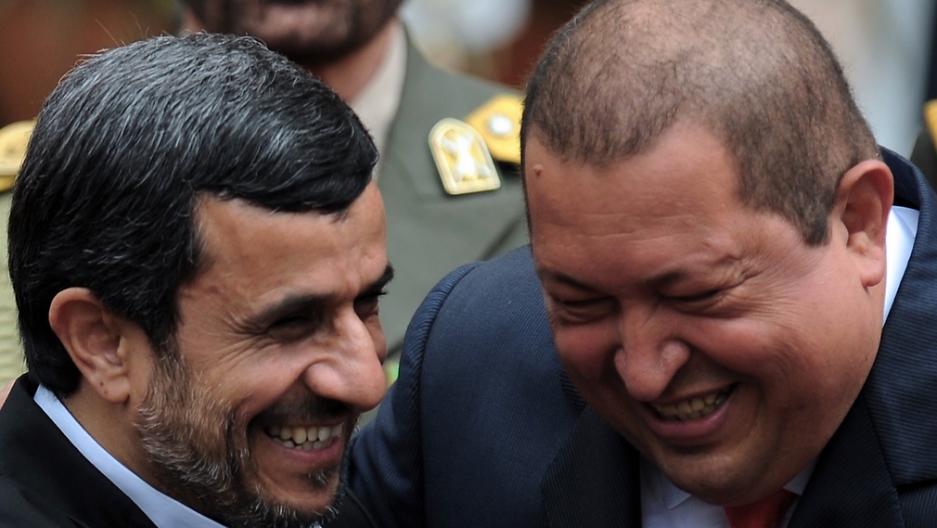 LIMA, Peru — If Venezuela president Hugo Chavez ever feels that he has the world against him, he can probably take heart from the example of his Iran counterpart, Mahmoud Ahmadinejad.

Chavez may be bombastic and polarizing, while facing genuine doubts over his democratic credentials and intense diplomatic hostility from the United States.

Yet he has a long way to go before plumbing the depths of geopolitical isolation experienced by Ahmadinejad, who last night kicked off a five-day tour of Latin America in Caracas.

That litany of abuses is reflected in Latin Americans’ dismal opinion of Iran.

According to opinion research company Latinobarometro, Iran came last out of nine different nations based on interviews with 20,000 people in 18 countries across the region. Just 25 percemt of Latin Americans said they had a “good” or “very good” opinion of Iran, compared to the 72 percent who had that opinion of the US.

So why then, beyond their shared antagonism towards Washington, would the leaders of Venezuela, Ecuador, Nicaragua and Cuba be interested in hosting Ahmadinejad?

The answer is in the mushrooming number of commercial ties that Iran has developed in the region even as the US and its allies have stepped up economic sanctions against Tehran.

In Venezuela, Iran now has investments worth more than $5 billion, including everything from cement factories to car assembly plants and dairy production facilities.

And as major oil producers, both nations are keen to assert their independence from the world’s largest crude consumer, the US, regarding both supply and pricing.

Ecuador, its economy also heavily dependent on crude exports shares that agenda, while Cuba and Nicaragua are both interested in increasing supplies of oil from Iran and receiving economic support for development projects.

“They invent that Iran, from Venezuela, Cuba, Nicaragua, is preparing attacks against the United Staes,” Chavez told Venezuelan TV. “We need to watch that carefully because it is a threat against us all.”

Yet despite strong ties with Chavez’s closest allies in Latin America, Ahmadinejad remains persona non grata in some of the region’s biggest economies, including those run by leftwing governments otherwise friendly with Venezuela.

Relations between Brazil and Iran have cooled noticeably, particularly after Tehran snubbed an offer from former president Luiz Inacio “Lula” da Silva in 2010 to provide amnesty to a woman sentenced to death by stoning for adultery, whose case had sparked an international outcry.

Meanwhile, relations between Argentina and Iran remain distinctly frosty following the unresolved 1994 bombing of a Buenos Aires synagogue, in which 85 people died. Argentina continues to accuse the Iranian regime of being behind the attack.

Last year, Bolivia, another member of Chavez’s “Bolivarian” leftwing axis, was forced to apologize to Argentina after receiving a state visit from Iran’s defense minister, Ahmad Vahidi, who Argentine prosecutors accuse of orchestrating the bombing.