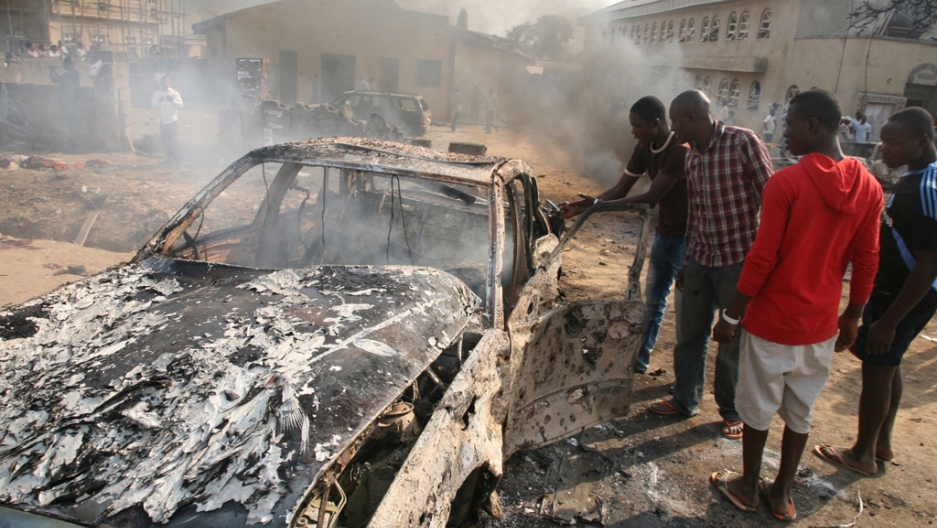 Nigerians look at the wreckage of a car following a bomb blast at St Theresa Catholic Church outside the Nigerian capital Abuja on December 25, 2011. Two explosions near churches during Christmas Day services in Nigeria, including one outside the country's capital, killed at least 28 people amid spiralling violence blamed on an Islamist group. The suspected attacks stoked fear and anger in Africa's most populous nation, which has been hit by scores of bombings and shootings attributed to Islamist group Boko Haram, with authorities seemingly unable to stop them.
Credit: Sunday Aghaeze
Share

As many as 20 people were killed Friday in north-eastern Nigeria, in a fresh violence claimed by the Islamist Boko Haram sect, Agence France Presse reported.

Five gunmen opened fire on a group of Christian Igbos, who were meeting at a hall in the town of Mubi, in Adamawa state, to mourn the death of a friend killed in an attack a day earlier.

Reports said two people died and three others were hurt in an attack Thursday in the same town by gunmen on motorbikes.

Nigeria is divided between a Muslim north and Christian south, and one faction of Boko Haram on Sunday gave Christians living in the north an ultimatum to leave, the BBC reported.

The victims in Mubi belonged to the Igbo community from Nigeria's south, residents told the BBC, adding that the gunmen had shouted "God is great" as burst into the hall and opened fire.

Meanwhile in a separate attack Thursday night in the city of Gombe, gunmen killed six people in an attack on a church, AFP reported.

Boko Haram has claimed responsibility for this attack, and Friday's attack in Mubi.

More on GlobalPost: State of emergency declared after Nigeria attacks

The latest violence in Nigeria comes after President Goodluck Jonathan announced a state of emergency in parts of Borno, Yobe, Niger and Plateau States, the Xinhua news service reported, adding that Adamawa was not on the list.

A spokesperson for Boko Haram, Abul Qaqa, told journalists in the city of Maiduguri by phone that the attacks would continue despite the state of emergency, AFP reported.

“We are extending our frontiers to other places to show that the declaration of a state of emergency by the Nigerian government will not deter us . We can really go to wherever we want to go.”

He said the attacks were in response to the group's ultimatum for Christians to leave Nigeri'a north.