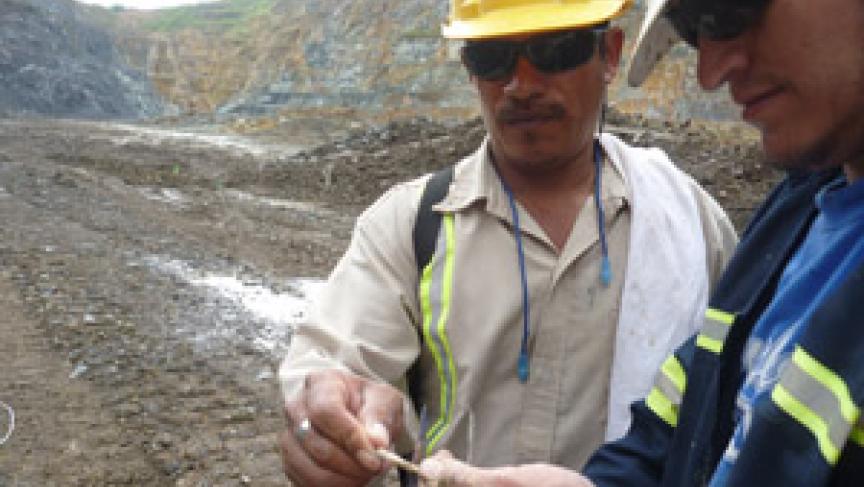 Workers from B2Gold discuss mining operations at the mine in La Libertad, Nicaragua. (Photo by John Otis.)

The town of La Libertad saw heavy fighting during Nicaragua’s civil war in the 1980s, but today, the blasts that can be heard are from miners exploring for gold.

In the past decade, the price of gold has jumped from $300 an ounce to more than $1,800. These record prices have caused a boom in gold mining across Latin America, particularly in Nicaragua, the second poorest country in the Western Hemisphere, after Haiti.

B2Gold, a company based in Vancouver, Canada, operates Nicaragua’s largest gold mine. Inside the company’s massive mills in La Libertad, ore is crushed then washed with a carbon and cyanide leach solution to isolate the gold.

B2Gold bought the mine in 2009 and has spent $100 million to modernize the operation. The company’s efforts have helped Nicaragua double gold production in the past three years and has created jobs in La Libertad.

“The mine is very important because it has meant jobs for everyone,” said Cristobal Gonzalez, one of the workers at the B2Gold operation. “It’s also helped develop the community.”

People have been mining gold in Nicaragua for centuries, but the industry fell on hard times after the 1979 revolution. The Sandinista government nationalized mines and expelled foreign companies.

A U.S. embargo in the 1980s made it nearly impossible to buy spare parts for American-made mining equipment. In addition, the gold mines were targeted by Contra guerrillas.

“There was a lack of investment and a lot of damage caused by the war. The mines were targets because they were located in remote areas. La Libertad was a war zone," said Oscar Vega, the manager of the mine.

But now, the country’s mining industry has come back to life. It costs about $500 to produce an ounce of gold that today sells for about $1,600. Foreign mining firms are being invited back to Nicaragua and are even being welcomed by their old foes, the Sandinistas, led by President Daniel Ortega. The Sandinistas have ditched their Marxist rhetoric and government officials have reached out to mining executives.

“We work together, you know? If there’s a problem we sit down and we solve it and that’s a huge difference,” said Randy Martin, chairman of Hemco, which runs Nicaragua’s second-largest gold mine. “This is by far – and you can talk to any mining company in Central America – this is by far the best place to operate."

Gold is now the country’s third-biggest export, behind coffee and meat, according to Jose Aguerri, president of Nicaragua’s private business council. He said gold has helped the economy grow by 4 percent annually in the past year, the highest rate in Central America.

Another factor, according to Martin, is that firms have so far focused on Nicaragua’s traditional mining zones rather than building open-pit and tunnel mines in untouched areas.

Mining companies are also winning hearts and minds by sponsoring health, education and recreational programs. Tom Lee, who’s head of corporate social responsibility in Nicaragua for B2Gold, showed off a company project to install lights and a new roof at the town basketball court.

“The idea is to give recreational opportunities to some of the youth, the kids here in La Libertad so that they have something to do in the evenings,” Lee said.

B2Gold has also hired contractors to pave streets and build houses for miners. Lee said the company intends to invest heavily in both mining projects and community development while the price of gold is still high. That way, he said, Nicaragua will have something to fall back on when gold rush ends.

“We know that the price of gold is cyclical,” Lee said. “At some point it is going to drop again and we have to be prepared for that.”