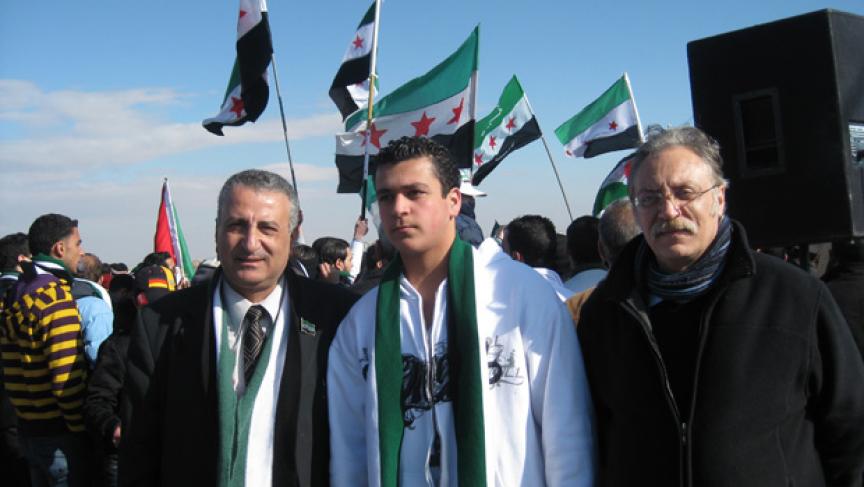 Kamal Labwani (left) with friends at a protest in Amman. (Photo: Dale Gavlak)

Share
Syrian political activist Kamal Labwani was the first Syrian dissident to be invited to the White House. That was back in 2005. He was imprisoned for that visit. In fact, the former Amnesty International prisoner of conscience has spent most of the past decade in prison, including three years in solitary confinement, beatings, and several attempts on his life for his anti-regime activities. Freed from a Damascus jail last November, he's escaped to Jordan, where he continues agitating for the downfall of Bashar al-Assad. The 54-year-old Syrian democracy activist has spent most of his life protesting against the Assad family. He first took to the streets in 1963, when Hafez al-Assad helped stage a military coup. Labwani was just 6-years-old. Today, Labwani joined protesters outside the Syrian embassy in Amman. He urged them to unite against the 49-year rule of the Assad family. He said there's little difference between Bashar al-Assad, and his father's treatment of the Syrian people. "Their behavior to the people is very bad," Labwani said. "The both of them are very bad. The same way. Dictator. Corrupt. Violent." The only thing that's changed, Labwani said, is the way opponents can protest against the regime. Demonstrators in the thousands are taking to the streets now. In the past it was all underground. "We tried to make secret parties when I was in university to avoid any kind of watching of the Mukhabarat, the security," he said. "We think that we can organize revolution through a secret way. Not by going to the streets and by moving the people. No. Now everything has changed." Labwani said they tried to re-enact what happened in Prague with the "Damascus Spring." "To import civil rights and human rights to face this kind of totalitarian regime by this way. We achieve some kind of change but the circumstances go another way after 9/11, because the international community was not interested in what happened inside Syria. We didn't have any support," Labwani said. Labwani said it's been a spectacular 9 months in Syria. He could only imagine a day when tens of thousands of people — and former army soldiers — worked to topple the regime. But it hasn't been easy for him. He's spent most of the past decade in prison, including three years in solitary confinement. He suffered beatings and, he said, several attempts on his life. But he said one thing has given him hope. As brutal as Bashar al-Assad may be, there's one bright spot. "He is very coward." Labwani, trained as a medical doctor, witnessed the horror in 1982, when Hafez al-Assad ordered a crackdown on an insurrection in the town of Hama. Despite the current regime's brutality, Labwani believes Bashar Assad won't be ability to carry out something similar. "He knows that any kind of massacre will be very very harmful to the regime and maybe bring support to military action from outside. He cannot attack one city without any reaction from other cities," he said. What really troubles Labwani is the question of whether the current Assad is really in control of Syria. There was a brief moment, he said, when Assad took over after the death of this father, that people thought reform was coming. "I think he is the president but he is weaker. We don't know who is ruling Syria now."