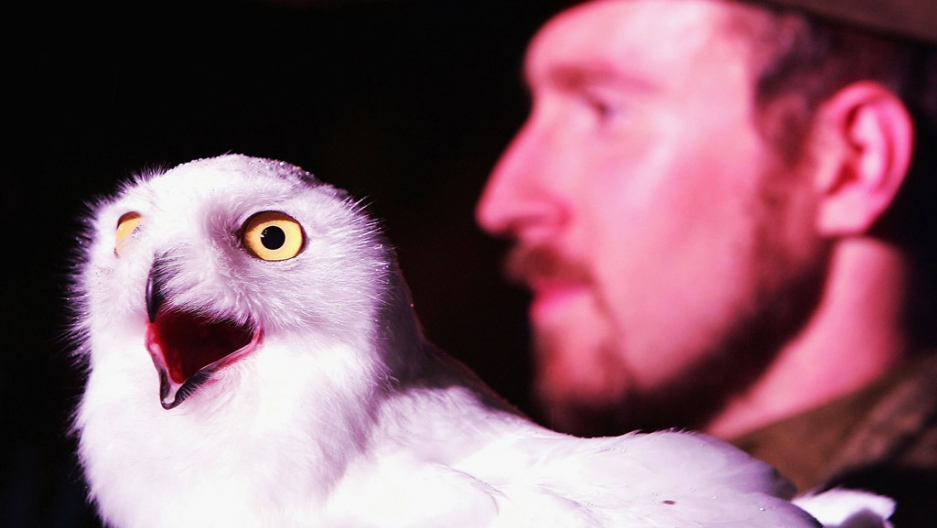 A snow owl sits on an actors hand during the Harry Potter And The Prisoner Of Azkaban launch party. The snowy white birds have been sighted in record numbers across the US this winter.
Credit: Scott Barbour
Share

Hedwig, is that you? Well, sort of.

Made famous by their role as mail couriers and companions in the Harry Potter books and novels, snowy owls have been spotted by birders across the United States, the Associated Press reported. The birds, which are mostly white and can reach 2 feet in height with a wingspan of nearly 5 feet, are native to the Arctic, but have been sighted everywhere from Boston's Logan Airport to Hawaii.

The yellow-eyed birds make their way to the US every three or four winters, but they have been much more abundant this year. The AP reported that as many as 30 owls were seen around South Dakota's Lake Andes in December alone.

Why the influx? Unfortunately, it's not because acceptance letters have gone out from Hogwarts. Denver Holt, the director of the Owl Research Institute in Charlo, Montana, said a plentiful population of Arctic lemmings this summer led to a strong breeding season for the snowy owl.

The rodents make up the owls' main diet, and the increase in the birds' population means that more young snowy owls are scanning the United States for voles, field mice, rats, rabbits and shore birds.

"And if they're finding rodents there, they're staying there," Holt told the AP. "And perhaps seeing a couple of more snowy owls there, they may think, 'OK, this is a hot spot.'"

Snowy owls are an elusive species. Their lifespan is not known, though Holt estimates that they can likely survive 10 to 15 years in the wild and three decades in captivity. There's also no official estimate on the owls' population. One study conducted on a Canadian island found thousands of snowy owls one year, and not a single one the next.

"They're too spread out and they move around too much," Holt explained.

Their rarity makes a snowy owl sighting all the more thrilling to bird enthusiasts and Harry Potter fans alike.

"Here's the largest North American owl in terms of weight, a near all-white ghost of a bird for an adult male," Matthew Cvetas, a birder from Illinois who has seen four snowy owls so far this winter, told the AP. "For me, it symbolizes wilderness at its best."