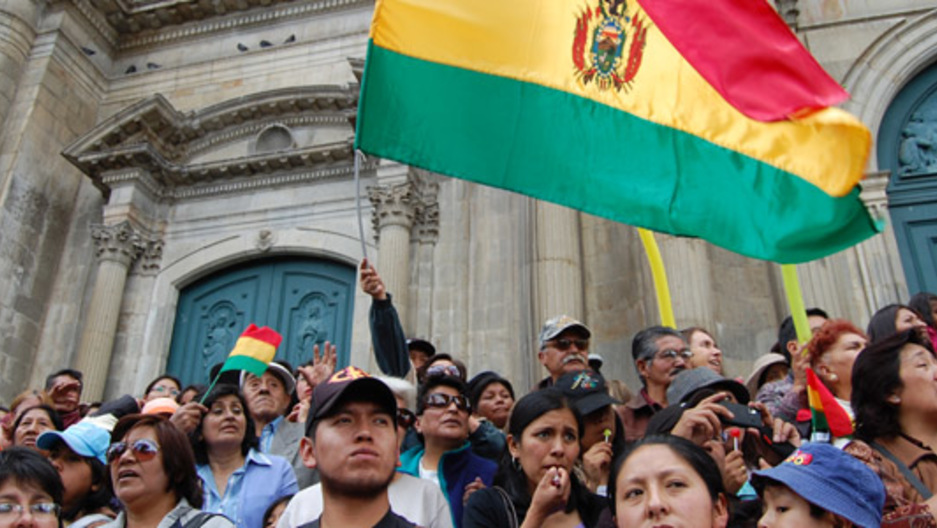 Demonstrators in Bolivia demanded President Evo Morales back down from his plan to increase fuel prices and reroute a planned highway. (Photo by Emily Alpert.)

Evo Morales, the first indigenous president of Bolivia, is trying to remake his country, shaking off global capitalism and empowering indigenous people.

He has nationalized the gas industry, loosened the rules on growing coca and kicked out the US ambassador. Now Morales is trying to take his revolution into the classroom.

In the farming town of Rodeo, the education revolution kind of looks like a science fair. Little kids in booths papered with posters earnestly explain how to harvest ch’aki jawas beans. They chant about corn in Quechua, an indigenous language. The moms and dads here say they can’t imagine this happening when they were little.

Almost two thirds of Bolivians are indigenous, and they’ve long suffered discrimination here, including in school. Alejandra Cruz said that when she moved from a small village to the capital La Paz, the other children tormented her because she spoke Aymara, another indigenous language.

“They hit me, they pulled my braids. They kicked me when I passed by. They dumped my breakfast all over me. And then there were insults,” Cruz said.

When Cruz had her own children, she didn’t speak Aymara to them so that they wouldn’t suffer the same insults.

Today Cruz teaches Aymara to preteens in a tony part of La Paz, something she never could have imagined when she was a little girl.

“I thank God for a government like this,” Cruz said.

Under a law passed in December 2010, all schoolchildren must learn Quechua, Aymara or some other indigenous language, as well as Spanish and a foreign tongue.

Marielle Cauthin, who worked in the Ministry of Education while the reforms were in the works, said the idea is to make schools respect and embrace local cultures. For example, she said, teachers used to scold children who had dirty hands from working in the fields.

“What teachers need to understand,” Cauthin said, “is that the dirt on their hands reflects their work in the country.”

The education reform law is loaded with bold words like “decolonization,” “liberation,” and “anti-imperialist.” It’s the kind of rhetoric that helped Morales win votes and adoration.

But that adoration is starting to fade.

Protesters in Cochabamba recently took to the streets, chanting that Morales said things would change, but that was a lie. Demonstrators have forced Morales to back down on fuel price hikes and the rerouting of a planned highway. Many of the same people who backed Morales now question whether he really stands for the things he promised, like indigenous rights and the environment. Education reform hasn’t been as explosive, but it could still be a fight.

Jose Luis Alvarez, president of the teachers union of La Paz, is a radical Marxist who thinks the education reforms don’t get at the real inequalities in one of the poorest and most inequal countries in Latin America.

“The new law is condemned to fail,” Alvarez said.” The only thing that they’re doing is repeating things that have failed.”

Alvarez said he believes that because economic inequalities still exist, the reforms will suffer the same fate as the last round of education reform in the 1990s. Back then, the government also tried to bring Aymara and Quechua into many schools, but many indigenous parents resisted. They worried their children would face discrimination. Those fears still exist.

Maria Luisa Velarde, who teaches at a technical school, said her students prefer English because it gives them more opportunities for jobs; it opens more doors. She said they don’t see Aymara as being very important even though their parents and grandparents speak it.

In the meantime, Bolivian schools are preparing to implement reforms. Teachers are taking night classes to learn indigenous languages. But schools complain that there’s been little training to explain what “decolonization” means for first graders or even high school seniors.

In a high school in sprawling El Alto, Principal Luis Cameo Borda said they’re still waiting for more details. They aren’t sure what this revolution means for them.

If the Bolivian government doesn’t give them clearer instructions about what “decolonization” really means in the classroom, Borda said, nothing will change.