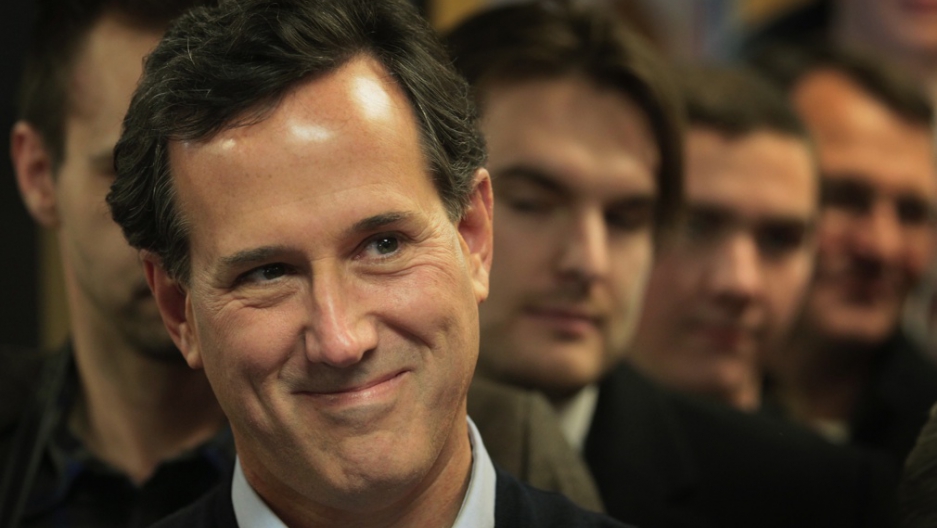 Republican presidential candidate and former US Senator Rick Santorum waits to be introduced during a campaign stop at the Daily Grind coffee shop on Jan. 1, 2012 in Sioux City, Iowa.
Credit: Scott Olson
Share

IOWA CITY, Iowa — Former Massachusetts governor Mitt Romney ultimately emerged as the winner of the Iowa caucuses, in a photo finish that gave him just eight votes more than his new main rival, former Pennsylvania senator Rick Santorum. Both men scored 25 percent of the vote in Tuesday’s race. Texas Congressman Ron Paul came in third with 21 percent, a creditable but disappointing showing for a man many thought might triumph in the state.

The other three candidates were way behind — Newt Gingrich with 13 percent, Rick Perry with 10 percent, and Michele Bachman dead last at five percent.

The Iowa caucus: what is it?

The numbers are in, but the analysis will continue for days to come. Iowa, while attracting an enormous amount of media attention, does not necessarily serve as a firm predictor of success in the elections. All eyes will now be on New Hampshire, where the nation’s first primary will take place on Jan. 10.

But regardless of their real significance, the Iowa caucuses are a major milestone in the race to the White House, and residents of the Hawkeye state enjoyed the temporary limelight.

“Iowans take these caucuses very seriously,” said a local reporter at the Iowa Memorial Union (IMU), a venue at the University of Iowa that gathered five precincts for the vote on Tuesday. “No matter who wins, tomorrow we go back to being just Iowa.”

The Iowa caucuses are non-binding, meaning that the results will have no direct bearing on the delegates eventually selected for the state and national conventions. It is a straw poll, and drew less than 10 percent of the state’s registered voters.

Registered voters come to a selected venue, supporters for each of the candidates are given a brief period to make their case from the podium, then those assembled write the name of their chosen one on small, blank slips of paper, usually color-coded for their precinct.

At the IMU, fewer than 200 people showed up. The hall had been prepared for 650, and organizers had predicted that each seat would be filled. But it was a small affair, with only three candidates — Ron Paul, Rick Perry, and Newt Gingrich — being represented by speakers.

Organizers had feared that the Occupy movement, headquartered in a park nearby, would attempt some disturbance, and extra campus police were on hand in case of trouble.

But in the end the event was almost eerily quiet.

What energy there was went to Ron Paul; the Texas congressman’s libertarian, isolationist views are a hit with students. Groups of young people streamed in, many having cut short their holiday semester break to caucus for their idol.

“Ron Paul stands for liberty,” said one young man, sporting a button for his candidate. “He will bring us a more humble foreign policy, an end to the wars.”

Paul has also advocated legalizing drugs and gay marriage, or at least leaving it up to the individual states. Such issues touch a nerve with young people here.

Rick Santorum, who swept the western part of the state and very nearly upset Romney’s lead, was far less popular in this relatively liberal enclave. His weeks of tireless campaigning might have gained him a firm following with more conservative, religious evangelicals. But his endless meetings at local eateries did not impress eastern Iowans.

“What’s with all the Pizza Ranch appearances?” joked one local photographer. “I think he’s put on a few pounds.”

Mitt Romney did a workmanlike job of campaigning in Iowa, expending minimal effort until the final weeks. His narrow victory owed less to real enthusiasm than to a grim realism among Iowa’s Republicans. Many think he is the only one with a chance of beating President Barack Obama in November.

“It’s more a case of ‘hold your nose and vote for Romney,’” said Justin, a young Republican organizer at the caucus. “Ron Paul is a good candidate, but it is not the 1960s any more. His policies may be a hit with students, but he cannot win.”

Many say the same about Rick Santorum; his strong showing in Iowa may give him a boost over the next few weeks, but in the end, say analysts, he lacks the national organization to go the distance.

“Rick Santorum could well be the next Mike Huckabee,” said a commentator on local television, announcing the results. “Huckabee caught fire and won in Iowa (in 2008), but then his campaign died.”

Gingrich, who had briefly attained frontrunner status, will most likely be badly hurt by his poor showing in Iowa. He, and many others, attribute his low numbers to a flurry of attack ads sponsored by Super PACS close to Mitt Romney.

Now that Santorum and Paul have emerged as genuine rivals, they could suffer the same fate.

Rick Perry’s 10-percent results have sent him home to Texas to reassess his campaign, and to “determine whether there is a path forward.” He could very well drop out before South Carolina’s primary on Jan. 21.

“Maybe there will be another Michele in the White House,” she said in a speech from Des Moines Tuesday evening.

She may be picking up on the spirit of Iowa itself — a blind faith in the future.

In the center of town there is a lovely little playground, with slides and swings, and soft rubbery flooring to shield children from falls. The sign in front says, “Welcome to City Plaza Playground. Funded in part by the Optimist Club of Iowa City.”