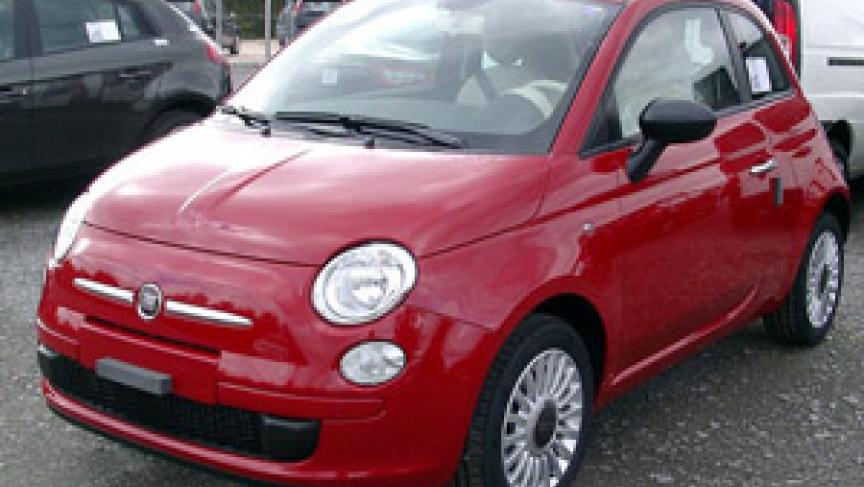 Fiat is introducing the Fiat 500, a micro-car, to the United States. (Photo by Rudolf Stricker via Wikimedia Commons.)

Fiat is hoping the Fiat 500, a a micro-car and re-introduction of an Italian classic, will experience a rebirth much like the British Mini-Cooper did a decade ago.

The majority owner of Chrysler, Fiat is hoping to make the 500 a major success in the United States. They're counting on this product launch going better than when they launched the Fiat Brava here in the 1980s.

The car is getting mixed reviews from experts, though most admit the Jennifer Lopez commercials are top notch.

The 1980s ads for the Brava promised “an impressive list of standard features.” And, “luxury that is uniquely European.”

Italy, the land of Sophia Loren, Gucci and Versace, seems like an easy sell as a source of luxury.

But that’s a modern creation. In the 1980’s it was a different story, said Brian Kelly.

Kelly thinks, this time around, the Fiat 500 – the cinquecento, as it’s known in Italy – will catch on.

Kelly, who operates a handful of car dealerships in Massachusetts, last March opened the first Fiat “studio” in the state.

“Everybody is into Italian styling today, whether it’s shoes, handbags. The Fiat’s like a Gucci handbag or a nice pair of shoes. If you sat in one and you drove one, you’d know exactly what we’re talking about,” he said.

Salesman Sean Cheller showed off a Fiat 500 Sport, prima edizione. It was one of the first 500 Fiats imported to the U.S. — this particular car was number 47.

The car comes in three models – there’s “pop,” “sport” and “lounge” – sounding much like a trip to Starbucks. There are 14 different colors and personalized chrome flourishes and decals – like flowers and butterflies — to choose from. There are even more options for the interior.

The Cinquecento isn’t cookie-cutter. It’s kind of fun to drive. But, will a tiny vehicle that looks sort of like an egg on wheels finally be the Italian car that takes the American market by storm?

Bill Griffith, who writes about cars for the Boston Globe, said it’s highly unlikely that the Fiat 500 will ever be much of a player in the American market.

And Griffith said the gimmick with the showrooms – the “studios” – could hurt sales. Fiat controls Chrysler, so Griffith said the 500 should be sold in Chrysler dealerships. Otherwise, you miss the impulse buyers who might initially be looking for another car – or who don’t know the Fiat 500 exists.

Even so, he said, Fiat could still do pretty well with in a niche market.

“They’ve sold, I’m not sure how many million of them worldwide; it’s been proven reliable on an international scale; it’s got the cute factor; and it’s been a great attention-getter, and that’s the way they’ve marketed it, with J-Lo and so on,” he said

But the 500 isn’t just cute, Italian and marketed by a sexy American singer. It will soon introduce a 160 horsepower engine to a car about the size of a bathtub. It'll be fast.

And that’s just the beginning. A Fiat USA spokesman confirmed that there are plans to bring the Alfa Romeo to the North American market sometime soon.