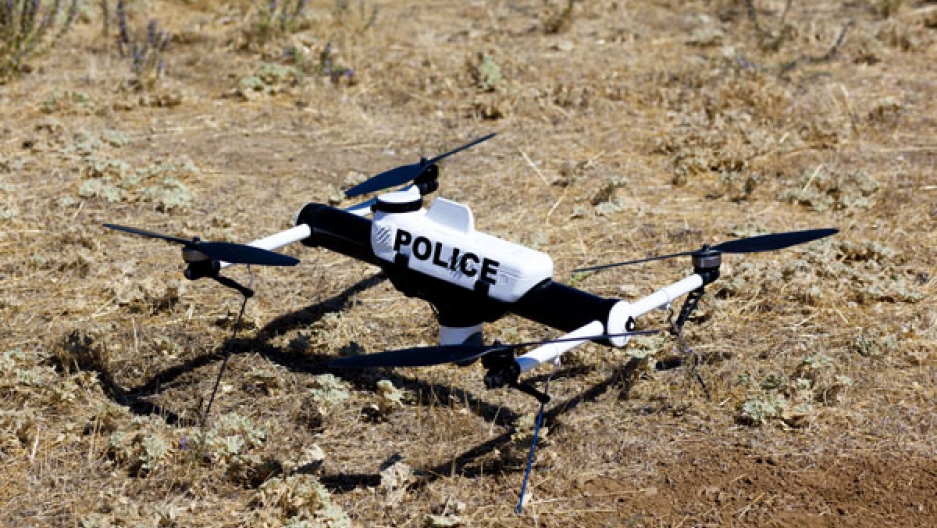 Companies like AeroVironment are hoping that police use of unmanned aerial vehicles will balloon when new FAA regulations are introduced next month. (Photo courtesy of AeroVironment.)

Next time you're thinking about running from the law, think about this: unmanned aerial vehicles may be coming to a police department near you.

In Southern California, a company that specializes in making UAVs for the military is turning its attention to the civilian market. But don't necessarily think of big drones like the Predator of the Reaper, think of a humming bird.

That's right. AeroVironment, a company in Southern California, is taking it's expertise and looking for ways to help police. Take the company's humming bird-sized drone, which can be launched for an operators' hand and immediately begin streaming back live video.

From largest to smallest, the company has the Puma, the Raven, which flies for about 90 minutes and weighs 4 pounds and the Wasp, which weights about a pound and can fly for 45 minutes, said Steven Gitlin, company vice president.

"They're in the field today helping our war fighters and our allies operate more effectively and safely," he said.

In prototypes, though, the company has even smaller craft. One that's designed based off an Arizona humming bird weights just 19 grams — less than the weight of a AA battery. It uses flapping wings for propulsion and control.

Los Angeles County Sheriff's Commander Bob Osborne and others in L.A. law enforcement have been trying to get permission to use drones for years. He took over the project from Sid Hale, now retired, who started the project.

"I was in the Marine Corps reserve in Iraq and we were using them every day," Hale said. "For intelligence and surveillance and reconnaissance. I thought when I got back to the United States this would be a great application for some of the things we would use in law enforcement."

Osborne can see them being useful not only for surveillance, but also in chemical emergencies or during rescues. UAVs can go places where you'd never send a manned aircraft, he said.

Finally, the Federal Aviation Administration is poised to give Hale and Osborne what they've been looking for. New regulations are expected to be issued in January, allowing domestic use of UAVs.

But don't be so excited, says John Villasenor, an analyst for the Brookings Institute and outspoken critic of civilian police use of UAVs.

"I think there are serious implications for privacy," he said. "I think we're all accustomed to a world where we're not being looked down upon from above and that's a world which is, for better or worse, vanishing. I think it raises a lot of really interesting privacy concerns."