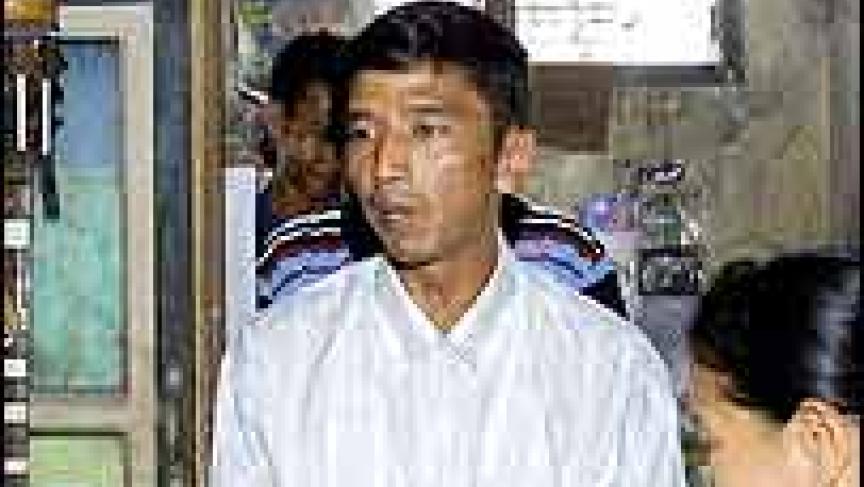 Share
Myanmar marks the 64th anniversary of its independence from Britain this week. The leaders of the country, also known as Burma, used the occasion to announce a prisoner amnesty–reduced sentences for many, freedom for a few. The amnesty was much smaller than activists were hoping for, though, and it appears at this point that most political prisoners will remain behind bars for now. Estimates of the number of political prisoners in Myanmar range from 500 to 1,500. Here is the story about three of them. In late October in Rangoon, Myanmar's largest city, a couple thousand people gathered to celebrate the 49th birthday of activist Min Ko Naing. People sang a few traditional Burmese songs, and one international one. Min Ko Naing wasn't at the celebration, though. He was in jail. In fact, he's spent nearly half of his 49 years in prison. He was a leader in massive student demonstrations that swept the country in 1988, and went into hiding following a government crackdown. He was captured and thrown in jail the following year. Moethee Zun was another leader in 1988. He says that, on the first morning of the demonstrations, no one showed up. He and Min Ko Naing were in separate parts of Rangoon, waiting for people to join them. Hours passed. Then, a little after 12 noon, Moethee Zun heard from Min Ko Naing. "He called me, he got the crowd! 'I got the 300 crowd!' So we marched together, to City Hall. Sorry." Zun says, getting choked up. He still gets emotional when he thinks about this fleeting moment of hope. Demonstrations swelled, and soon spread across the country. Min Ko Naing's first prison term lasted nearly 16 years. He spent much of it in solitary confinement. He was released in late 2004, and immediately went back to activism, including a campaign of public visits to the families of political prisoners. He was arrested and imprisoned again. After his last release in January 2007, he focused his protests on the government's economic mismanagement. He was arrested in August of 2007 and sentenced to 65 years in prison. That protest, though, was picked up by a coalition of Buddhist monks. They led mass demonstrations that came to be known as the Saffron Revolution. Monk U Pyinya Zawta was one of the movement's leaders. He remembers a young monk named U Gambira becoming a key spokesperson during the protests. "I remember U Gambira trying to convince the other monks that getting involved in this kind of protest wasn't about politics," Zawta says. "But that they would be doing their jobs as monks protest, because of their loving kindness for their people, and they were doing it for the people's welfare." The government launched a brutal crackdown and the monk leaders went into hiding. U Gambira was tracked down and jailed for 68 years. He's reportedly been in solitary confinement for leading a Buddhist chant in prison. There are thought to be about 150 monks still locked up. During the Saffron Revolution, one of the most reliable sources of information was the blog of a young writer named Nay Phone Latt. He published daily updates from Rangoon, and became a go-to source for international media. He was arrested in January of 2008 and sentenced to 20 years in prison. A person close to him told me that, while he's been in prison, he's been learning English, and writing articles under various pseudonyms. "He's representative of a new generation of Burmese," says Larry Siems with the PEN American Center, which advocates for freedom of expression worldwide. Last year, the center gave Nay Phone Latt its annual Freedom to Write award. Siems is optimistic about recent signs that Myanmar's government might be reforming, and says that people like Nay Phone Latt are exactly the type that should be involved. "He demonstrates to the world, just in his optimism, his enthusiasm for his art, his enthusiasm for his medium, what the future of Burma holds, if the transformation that seems to be taking hold right now really is allowed to continue and to lead where it ought to lead," Siems says. Myanmar's government generally rejects the idea that any of its prisoners are locked up because of political activity. President Thein Sein said recently there are "no political prisoners — all prisoners have broken the law." Burmese activist Moethee Zun, who's known the jailed Min Ko Naing since they were both nine years old, says that his friend has spent so much time locked up that the outside world is hard for him-daylight hurts his eyes; noises startle him. "He is almost my same age — we are going to 50," Zun says. "We fight since we were teenage, together. So my friend has no girlfriend, no family, he always living in the solitary confinement. It is so difficult for human being, living in that prison." In a letter to those celebrating his birthday in October, Min Ko Naing wrote: "The location of a person is not important, only the doctrine the person embraces is important."