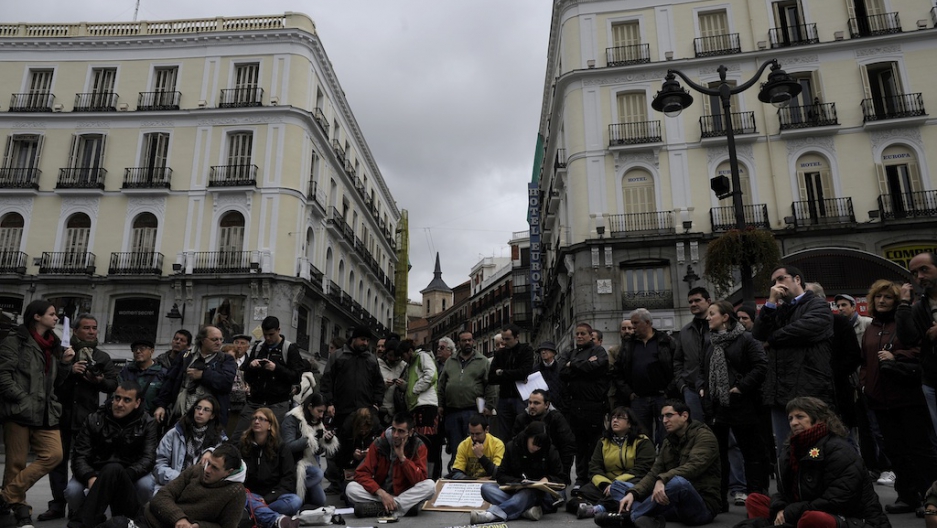 MADRID, Spain — It’s early Saturday night in the Spanish capital, and people in this feverish, over-caffeinated, sleep-deprived city are on the move.

In the city's beating heart, Puerta del Sol, and the avenues, streets and lanes leading to it, life is being lived exuberantly.

On the surface it is impossible to detect the terrible fact of Spanish life: a 22.8 percent unemployment rate — more than double the European Union average. Almost 46 percent of under-25s not in higher education lack a job. No part of the country is immune to the crisis. Even the capital's unemployment rate is in double digits.

Yet, to an untrained eye, the only sign of the jobs crisis engulfing Spain is the good natured remnants of the "indignados," standing around the square chatting with well-wishers. These young Spaniards were the first to say “enough,” inspiring the Occupy movement.

Up Calle Carretas, in the Hotel Madrid, is an abandoned building recently squatted by indignados. For one hour each evening, ordinary Spaniards are invited in to see just what the heck goes on inside the squat.

This Saturday night, middle class folks, sympathetic to the cause, are walking the corridors. It's like time traveling back to San Francisco circa 1968. The corridors are lined with cheaply produced posters urging non-violent change. People with long hair and beards entertain one another with acoustic guitars.

It is impossible to imagine other euro zone countries like France with so many people out of work remaining so calm. Greece, for all its troubles does not have an unemployment rate like Spain's and Athens seems to erupt once a week in violence.

Yet the Spanish seem to be managing. The reason isn't government policies to help the unemployed, although they do exist. But interviews in the streets and barrios of Madrid show that four key areas of Spanish society keep the country together, family, the Catholic Church, the black economy and something the Spanish call "aguantar."

There may be a lesson in Spanish society for the US which is entering an era of prolonged high unemployment.

More from GlobalPost: Spain is back in recession

One of the visitors to the Hotel Madrid is a librarian named Maria. When a reporter expresses surprise about the calmness of Spain in the face of its jobs catastrophe, she explains the reason Spain remains calm can be summarized in a single word, "Family." Governments come and go but, Maria explains, "You have your family for your whole life. If you can only earn 600 euros a month your family will help you." The reasons for this reliance on family lie in the way Spanish society has evolved through its tortured history.

"For centuries it was King, church and aristocrats, the rest of the people were poor," Maria says. "Deep in our history is an attitude that nothing you do matters." The class structure was impermeable. You were born into your station and stayed there. "They live their lives, we live ours." So the family, not the state, is where you turn for help.

Around the capital, at every level of society it's easy to hear stories that confirm the librarian's analysis.

In Plaza Lavapies, a small urban triangle with a tiny playground to match, Paloma Pinedo is pushing her six month old son in a stroller. She is one of the few native-born Spanish people in the square. Across the way, some middle-aged immigrants from Latin America are passing time with a boom box playing Latin rhythms. By the inevitable Western Union/internet office some men from sub-Saharan Africa are hanging around.

Pinedo is unemployed, and has been for seven years. She explains she used to work as a waitress but then married a man from Morocco who insisted she stay at home. They had three children before the Moroccan disappeared. Her new baby's father is an Ecuadorean.

Now the young woman is ready to work again but the work she is qualified for is taken by immigrants. "There would be more jobs for Spanish people if there were less immigrants," she says. Then explains, without irony, that she is about to become an immigrant herself. She is going to Ecuador to join the father of her child.

What about the other three children?

"They will stay with my father."Does he work? "Yes, he is a gardener for the municipality of Madrid." That's an example of family pitching in from the low-end of the class spectrum. But it is true of the middle class, as well.

In the Garcia apartment in the Barrio Lacoma, a middle-class Madrid suburb, it may be Saturday night, but no one is going out. Four adults are living on one modest salary. Other than visiting family they do not go out.

The living room of the Garcia home is full of photos of Spain's King Juan Carlos taken by paterfamilias, Jose, during his years as the chief photographer for ABC, one of Spain's leading newspapers. When the newspaper changed hands seven years ago, Jose, was laid off and has never worked again.

His wife Carmen, teaches elementary school, and is the family breadwinner. Her 2,000 euro ($2,600) a month take home pay supports Jose and their two grown children. A son, Alvaro, 27, and daughter, also named Carmen, 23. Both are university educated. Neither can find work. Carmen adds, that until recently she was supporting her brother, who worked in management at a large IT business until 2008, when he got laid off. Five adults, one school teacher's salary.

Jose is an up from the bootstraps type. He began cleaning printing presses at ABC when he was 14 years old. A photographer on the paper took a shine to him and taught him the trade. When new management took over they decided his thirty plus years on the job made him too expensive to keep. So he was gone. He shrugs about it now. "It was traumatic. But what can you do?"

Carmen explains that their relative calmness about the financial situation comes from the fact that they have lived in the apartment for more than 20 years and have paid off the mortgage. Similarly their car is paid for.

The big question in their lives is should the children stay or should they go?

Alvaro did a junior year abroad in Munich and would like to go back to Germany. "It's ironic," he laughs. "Four decades ago, when Spain was really poor, Spanish workers were immigrants to Germany to work on building sites and restaurants. Now I want to go to Germany for the same reason but I am too well-educated for that kind of work."

He adds he is not averse to doing manual work, "But what employer wants to hire someone with a master's degree to be a waiter or work in a shop? They will want more money than the employer can pay or they won't stay for long."

The parents are divided. Jose wants them to stay at home. Carmen says, "They should leave Spain. There is nothing here for them. My children are citizens of the world, they can go and live anywhere."

Alvaro is thinking of the US. His mother thinks South America is a better bet. "Peru or Chile ...." What about Argentina? "No," she laughs. "It's a place full of Italians who think they are English but speak Spanish."

Why the jobs crisis is worse in Spain than anywhere else

When the global credit crunch took hold in 2008 Spain was not in debt. It was one of the euro zone's success stories. Yet the credit crunch hit the country's workers harder than anywhere else in the developed world. Its economy shrunk by 3.7 percent but the fall in employment was almost twice as great, 6.8 percent according to figures from the International Labor Organization. No other country came close to that proportion of job losses. By comparison, in the US, the economy contracted by around 2.5 percent and the job market fell by about 3.9 percent.

The reason for this is twofold, explains Steven Tobin, senior economist at the ILO's International Institute for Labor Studies. "Spain suffered a crisis within the crisis. In 2008 there was not just a financial crisis but one in construction. Spain's entire nexus of growth, based on construction, was destroyed."

Spain is the Florida of Europe. Over the last three and a half decades its sunshine, relaxed lifestyle and 3,000 miles of coast line from the Mediterranean to the Atlantic made it the retirement destination of choice for many northern Europeans. Developers threw up high-rises and gated communities at a Florida-like pace.

During the decade before the crash, two-thirds of all new investment in Spain was in construction. One-third of new jobs generated were in the industry. After 2008, new building came to a shuddering halt. More than 35 percent of those working in construction were on short term contracts and so were easily laid off. Critically, short time contracts meant smaller worker contributions to unemployment insurance and so smaller payments for a briefer period of time when the jobs disappeared.

Spaniards can collect unemployment equal to 60 percent of your average earnings, for up to two years (depending on how many weeks of work you had prior to lay-off). But that is moot for many because it has been more than two years since they worked.

In Spain, according to ILO figures, more than 60 percent of unemployed workers qualify as "long-term" unemployed, by comparison, in the US, the current figure is 42.4 percent.

The second reason for the steady increase in joblessness stems from the first, according to Tobin. "During the employment construction boom, people dropped out of further education and [that] has created a vicious circle. Today the work force in Spain does not have the skills."

This helps explain why even as the economy shifts - Spanish exports have grown by 10 percent in the last year, according to Tobin - unemployment continues to rise.

Family is not the only reason Spanish society is holding together. Part 2 of this series will report on three other reasons Spaniards are relatively calm about high joblessness.

More from GlobalPost: Unemployment: How does Spain cope?