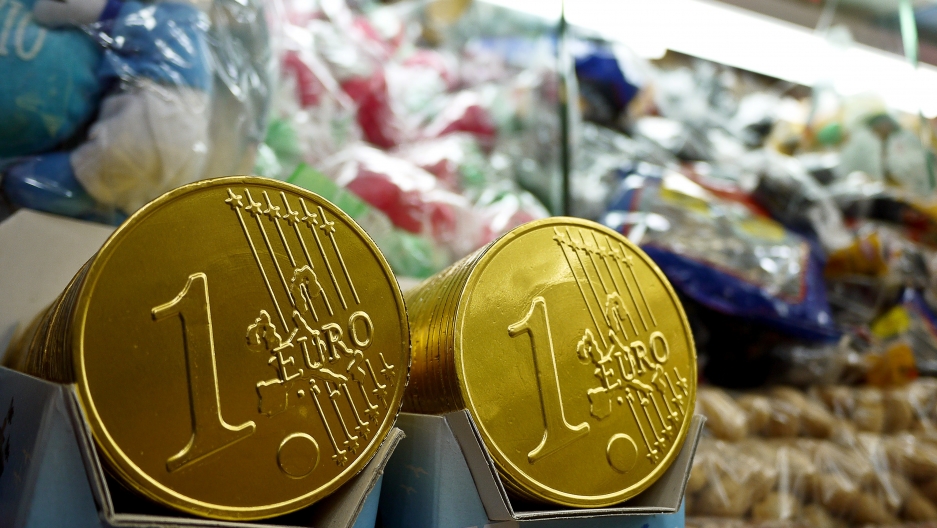 Chocolate euro coins are displayed on a stand at Piazza Navona in central Rome, on Dec. 30, 2011.
Credit: ANDREAS SOLARO
Share

It’s the 10th anniversary of the introduction of the euro at midnight tonight – it became the European Union’s common currency on Jan. 1, 2002 – but there are no celebrations planned, the New York Times reported.

According to the Times:

In Brussels, there will be neither a ceremony nor even a news conference to mark the occasion. That set the tone for other countries, many of which were doing the minimum: preparing to circulate a 2-euro commemorative coin for the anniversary.

That’s in stark contrast to how the euro was greeted in 2002.

In Paris, people lined up at cash machines, eager to withdraw the crisp new bills. Euro signs were everywhere to be seen – on winter street decorations, projected onto the face of buildings, even lit up on the side of the city’s historic Pont Neuf.

Some of the lack of enthusiasm may stem from the fact that 2011 was not a great year for the euro, the Times reported.

Spooked by the debt crisis and slow economic growth in the eurozone, investors sought safety in currencies like the Swiss franc, Canadian dollar and Japanese yen this year, Bloomberg News reported.

Another reason for the lack of celebration, according to the Times: The design of the bills, featuring neutral images like bridges and windows to avoid offending any one country, don’t inspire pan-European pride. “You’re not going to be able to make a currency that will enter into people’s hearts and spirits if you don’t make it about an identity,” Michel Prieur, a numismatist in Paris told the Times. “The history of the franc is one million times more interesting.”

Ivan Grossi, a sales representative in Rome, agrees that something was lost with the arrival of the euro, according to the Times. “I grew up with the lira, it was like one of the family, and I felt an enormous sadness when the euro was introduced,” he said.