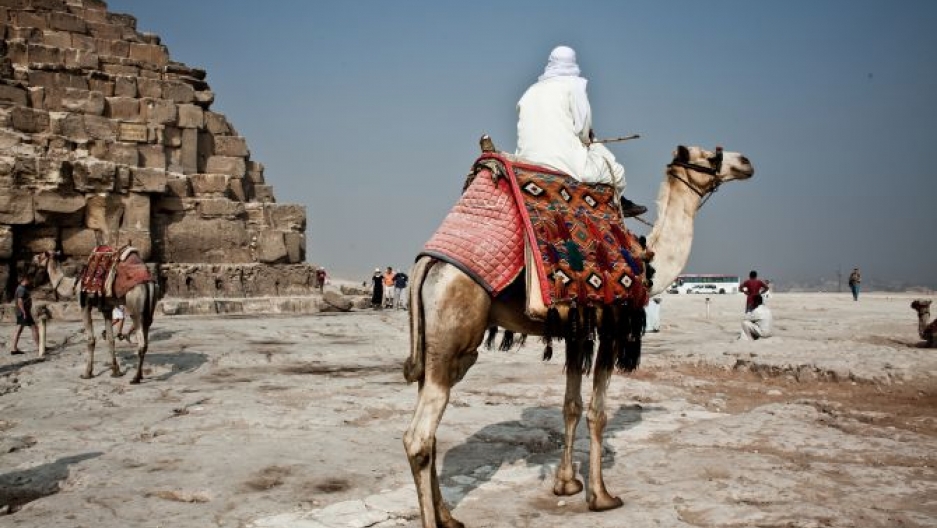 GIZA, Egypt — In the shadows of the pyramids are stables owned by families who make their living providing camel and horse tours to tourists coming from every corner of the globe to visit one of the seven wonders of the world.

Snapshots of these camel drivers are in family photo albums from China to America.

But with the whole world watching, a group of these camel drivers stormed into Egypt’s Tahrir Square at the height of the protests against the government — February 2 — and trampled and beat protesters. It was one of the most searing images of the government’s attempt to use those loyal to the regime to put down the growing demonstrations that ultimately toppled President Hosni Mubarak.

This event was dubbed the “Camel Battle,” a violent chapter from a history of the revolution that is still being written today. A criminal case against 25 defendants affiliated with the Mubarak regime who allegedly planned the attack is on hold, and was scheduled to resume Dec. 19.

Eight months after those days of protest and revolution, I decided to return to these stables where few tourists ever go and try to understand their lives, and how they’ve changed in the aftermath of the revolution. To my astonishment, some openly claimed to be among those who charged into the square. They shared their stories despite having been pigeonholed by the local media as poster children of the corruption.

“The government took five men from here, said 17-year-old Ahmed Atef Ramadan, who openly flaunted storming Tahrir on his white horse and making the cover of newspapers worldwide. “I don’t know how much they paid but if you had a camel you got paid."

Ramadan added that his actions were merely in self-defense against the provocations of anti-Mubarak protesters.

“We went to the governorate’s building in downtown to ask for some horse food because since the revolution started we did not get any food for the horses,” Ramadan said. “So we went, and on the way back we found ourselves in Tahrir and that is where it happened: They thought that our whips were weapons we wanted to use against them so they wanted to defend themselves and we wanted to defend ourselves too.”

I went back to the stables with photos and also compared them to TV footage of the Camel Battle, and was unable to confirm any of the camel drivers. But Ramadan insisted he was there and several other colleagues who also own camels confirmed his presence. He said he was arrested and his horse was taken away. He was detained for one day and released, but was vague about the details of how and why he was released so quickly.

He is part of a subculture of families who have carried out this trade for generations.

Every day members of the Sabri-Lemmon family tend to their horses and three camels in Nazlet El Saman, a village where the poorest of modern pyramid workers live and work at the foot of the Great pyramid of Giza just outside Cairo.

Their house overlooks the three largest pyramids from behind a concrete separation wall topped with a fence. During the day, the men of the family offer guided tours of the pyramids and neighboring touristic highlights by camel or horseback for just over ten US dollars.

Business used to be better in Egypt, a country whose main source of income is tourism. In 2010 the country collected more than 12 billion USD from tourism alone, with 2.5 million USD from visitors to this one particular site. The families of Nazlet El Saman were by no means rich, but they were getting by.

Since the start of the uprising in January, its residents say, this already impoverished community has now literally gone “broke.”

Mostafa, the eldest son of the family, explained that the so-called revolution may have been beautiful in some aspects but the Camel Battle not only severely tainted their own image but also significantly reduced the number of tourists visiting the pyramids since last February.

Most of the inhabitants of Nazlet El Saman are not as quick to assume responsibility for the notorious camel assault on peaceful demonstrators at Tahrir. However, there is an undertone that those who did participate in the rush were acting on behalf of the closely knit community, suffering as its primary business was brought nearly to a standstill by the uprising.