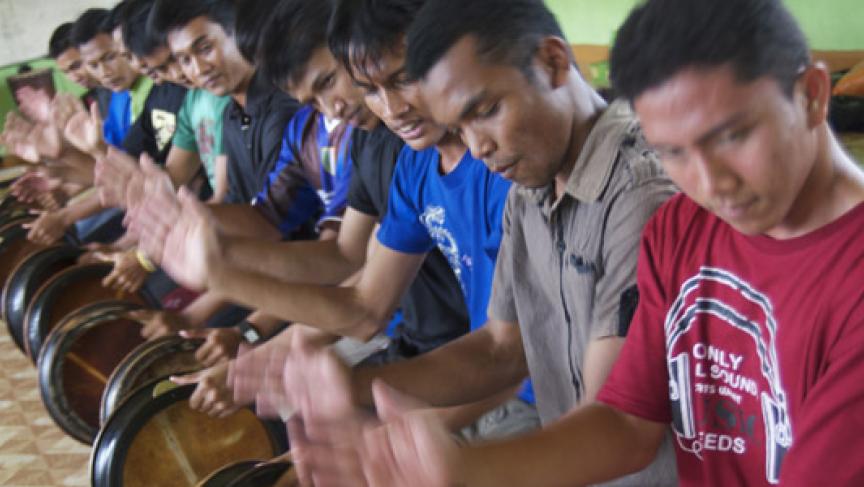 Synchronized drumming is at the heart of the peh badan, the unique style of body percussion in Banda Aceh. (Photo by Niall Macaulay.)

Aceh, devastated by a massive earthquake and tsunami in 2004, has struggled to rebuild.

And while the buildings are slowly returning, it's culture also took a massive hit when the tsunami that raced across the Indian Ocean killed 230,000 people, about half from the Aceh province.

Aceh’s rebels had struggled for independence for years. That ended with the devastation from the tsunami. Indonesia holds it firmly, but has granted it a special status within the country. But it has a special cultural status as well.

The province's cultural traditions reflect Aceh’s history as one of the earliest kingdoms in Southeast Asia to convert to Islam. Among them are a musical form known as body percussion.

Muhammad Imam Faudi drops to his knees, joining nine other men in a row on a tile floor. Their bodies sway together as they beat on their chests and snap their fingers. Each slap is accompanied by the rapa’i, a wooden framed Acehnese drum. The percussive sound is coordinated with energetic twists and turns.

Faudi dedicates his performances to the memory of his late brother, who was a senior member of singing and dancing troupe, called Sanggar Seulaweut. Faudi’s brother drowned in the tsunami seven years ago.

“We make dance to improve our spirit,” Faudi said. “After the tsunami, nobody can play this dance. We want to play again to make our culture recover after tsunami.”

Another member of the group is 20-year-old Badral Rifqi. He said recovering Acehnese culture is definitely important. But he’d like to see it spread as well.

“We want to introduce our culture to people around the world,” Rifqi said. “Acehnese culture is very unique, very, very unique.”

It may seem counter-intuitive, but the music and dance performed by Sanggar Seulaweut is influenced by the region’s particular brand of Islamic heritage, said 24-year-old Hermansyah, who goes by one name.

“Our dance and songs, in ancient times, it’s used to spread Islam in Aceh,” Hermansyah said. “That is why in our dance or in our songs you can find some Arabic sentences, or even some Islamic thought the pillars of Islam, like some advice or Islamic education.”

Yusny Saby, a professor at the State Institute of Islamic Studies in Aceh, said Islam has really helped soothe people after the tsunami as they try to keep their minds off the tragedy.

“Islam is a really kind of inclusive religion, I would say, accommodating all kinds of good behavior of human beings, including dancing and beating drums, of course with good purposes,” Saby said.

By good purposes, he means that there are restrictions in this devout province. Only a certain type of music is allowed, for instance. And in general, men and women are forbidden from being on the same stage. But Sanggar Seulaweut’s contemporary Genta or Creation dances are exceptions. Men and women do perform together, though they never touch.

The performers may soon realize their goal of spreading Acehnese culture. Sanggar Seulaweut performed in Turkey earlier this year, and already has invitations to tour elsewhere outside of Aceh in 2012.