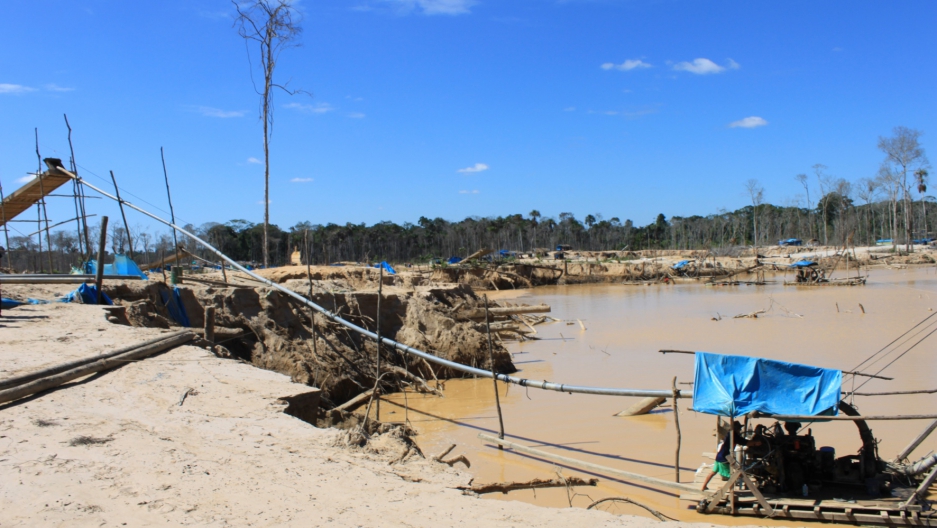 Crude mining techniques destroy the rainforest and poison the land, preventing it from growing back.
Credit: Alfredo Rodríguez / WWF
Share

Since the global economy fell off the edge of a cliff in 2008, sending investors scrambling to put their money into the ultimate safe haven, gold, thousands of illegal miners have flooded into the Madre de Dios region of central Peru.

Now they are ravaging its pristine tropical rainforests and river systems, including some of Peru’s most important nature reserves, using primitive mining techniques to churn through vast quantities of the region’s rich, sandy soils, sparkling with specks of the precious metal.

As they do so, they poison the water table with mercury and carve out vast, toxic holes in the virgin jungle.

“It is a disaster zone,” says Jorge Herrera, director of the southern Amazon program for the Peruvian branch of the World Wildlife Fund.

“The environmental cost is extremely high. That is partly due to the techniques used, but also to the irreplaceable biodiversity that this region harbors.”

Estimates of the number of miners in Madre de Dios range between 40,000 and 50,000. According to the Peruvian Society for Environmental Law, which is known by its Spanish initials, SPDA, just 3 percent of them are legal, working formal concessions with environmental permits and approved equipment.

These miners produce roughly one fifth of Peru’s annual total of 175 metric tons of gold. They are also responsible for destroying more than 70 square miles of tropical rainforest since the gold rush began, and dumping an estimated 35 metric tons a year of mercury into Madre de Dios’s streams, rivers and jungle, according to environmentalists.

Read more: Battle over mine in Peru

Many live in sprawling, dangerous camps deep in the Amazon, beyond the reach of the law, where guns, cheap liquor and brothels packed with teenage prostitutes proliferate.

“This issue is now too big for the regional government,” says Herrera. “Either the national government tackles this problem, or it is effectively handing Madre de Dios over to the criminal gangs, with everything that implies, not just for the environment but for public safety and the rule of law.”

Government crackdowns, including several major operations in 2011 involving police, the army, navy and air force, to seize and destroy the miners’ equipment, including dredges that plunder riverbeds and disrupt the rainforest’s delicate ecological balance, have not stopped the problem.

That is partly a question of economics.

Read more: In Colombia, dig at your own risk

The government charges a paltry sum for mining concessions — between $0.50 and $1 per hectare per year — compared to the $1,000 profit that can be made from mining a single ounce of gold.

In a region wracked by poverty and few other economic opportunities, almost every family has a member who is a miner.

“Mining is a natural activity in Madre de Dios. The government needs to respect it,” says Mario Cabrera Villavicencio, a squat man with white stubble who is vice president of the area’s main mining federation. “In Lima, they don’t understand the reality of life in the Amazon.”

Fishermen and local indigenous communities are also fiercely opposed to the environmental destruction.

In October, hundreds of local protestors occupied Puerto Maldonado’s town square with placards proclaiming “Where are the environmental prosecutors?” and “How many ounces [of gold] is a life worth?”

Speaking in the federation’s tiny office in Puerto Maldonado, the regional capital, Villevicencio said that most of the federation’s members are “informal,” not illegal.
“They have concessions, but the regional government has not responded to their applications for environmental permits,” he said.

Either way, the miners are operating contrary to the law, says Alan Diaz Carrion, a lawyer with the SPDA who runs a free legal consultancy in Puerto Maldonado for farmers and indigenous communities whose lands have been occupied by the miners.

“You might own the car, but if you don’t have a driving license then you are breaking the law if you are at the wheel,” Diaz Carrion says.

In a cabinet reshuffle earlier this month, the SPDA’s former head, Manuel Pulgar Vidal, was appointed environmental minister. He has promised a new law that will give the state more powers to stop the illegal mining but the details have yet to be made public.

“The objective is to correct the legal framework that may be generating limitations for a state that is determined to combat illegal mining, especially in such sensitive zones,” he told Peruvian TV.

Whether he is able to make more inroads into the problem than his predecessor, Antonio Brack, remains to be seen. Both men are among Peru’s most respected environmentalists. But, as the former – who Cabrera Villavicencio dismisses as a “stubborn mule” – discovered once in office, stopping the illegal mining is easier said than done, when the miners melt into the jungle just as the police and military raid their camps.

Now, with the global economy expected to tank again in 2012, Madre de Dios’s rainforests will need more protecting than ever.