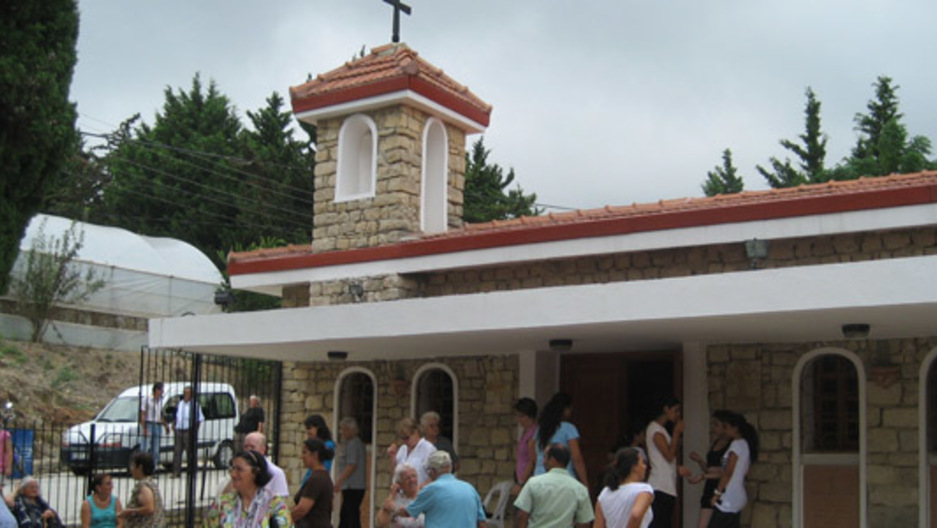 In Vakifli Koyu St. Astvatzatzin Armenian Apostolic Church has its first resident pastor in more than a decade. The community is the only all-Armenian village left in Turkey.. (Photo by Matthew Brunwasser.)

In Vafikli Koyu, Turkey, bitterness over the 1915 Armenian massacres and ethnic cleansing by Ottoman forces is still unresolved.

On a balmy Sunday in Vakifli Koyu recently, a sleepy village on a mountaintop overlooking the Mediterranean, the air smells like orange blossoms. The townsfolk, all 135 of them, never seem to hurry.

It feels like it could be any Sunday from over the centuries, as services start at the St. Astvatzatzin Armenian Apostolic Church. But today there is big news. The village has a new resident priest for the first time in 11 years. And this was his his first service.

Father Avedis Tabashyan was born and raised nearby. He is 31 and excited about his new job.

“I think more worshipers will come to church because there will be regular services,” Tabashyan said. “The spiritual life of the people will improve because they have a priest now with whom they can share their problems.”

The village looks and feels more prosperous than its neighbors — though that's largely due to the money sent home by family members working abroad. While there is also innovation here, the village in 2004 was one of the first in Turkey to start growing organic oranges, Tabashyan said most of the young people have left. The remaining villagers have realistic expectations.

“Agriculture doesn’t bring us much money so the population will continue to shrink,” he said.

But even if there are only 50 people left in the village, there will still be Armenians here. And whenever there is a holiday many who have left will remember the village. Some will even come back.

The village has a special history. In 1915, locals say, Armenians from the area held off Ottoman Turkish forces for 53 days. They signalled a passing French warship by hanging a banner on the mountaintop and were rescued.

When the province became part of Turkey in 1939, only the residents of Vakifli Koyu decided to return. Today, villager Stepanos Chaparyan said they’ve mixed nicely with their Muslim Turkish neighbors.

“There’s a little difference, but our traditions are very similar,” Chaparyan said. “We go to each others' villages for weddings and religious festivals and there’s no problems at all.”

The village is tranquil. The runoff from village farms flows down steep stone steps, carved into the mountainside along the village’s streets. Sometimes, Chaparyan will sit on a bench and playing a wooden folk flute.

The song he’s playing is emblematic of the painful relations between Turks and Armenians, sari gelin or “blond bride” in Turkish.

“It’s a song both Turks and Armenians share," he said. "The real meaning in Armenian is ‘mountain bride.’”

A documentary film using the name of the song, produced by Turks, promotes the Turkish nationalist perspective that Armenians were in fact the aggressors in the bloody events of 1915. But the people of Vakifli Koyu aren't bothered. They’re more concerned about business.

Gohar Kartun is selling jars of locally grown and prepared food products to the crowds of Sunday tourists who like to shop here. Kartun said visitors come with a wide range of expectations. She said many Turks have never met an Armenian before and their curiosity can make her feel like she’s in a zoo.

“It depends on the questions they are asking," she said. "Not everyone looks through the same window. Some of them say, ‘We are so happy to see Armenians in our Turkey.’ They want to come and see what kind of creatures we are.”

Kartun said tourism is a bright spot for Vakifli Koyu. The Hatay region is home to the ancient city of Antakya, called Antioch in the bible. The province also has one of Turkey’s most multicultural populations, including Turks, Arabs, Christians of various denominations, Alevi and Sunni Muslims.

“Hatay is a rainbow and we are one of the colors. And I’m trying to show it to the world," Kartun said.

As Turkey matures politically, many Armenians hope Turks learn to appreciate the country's diversity. Locals want people to think of Vakifli Koyu as the perfect place for a weekend stroll.