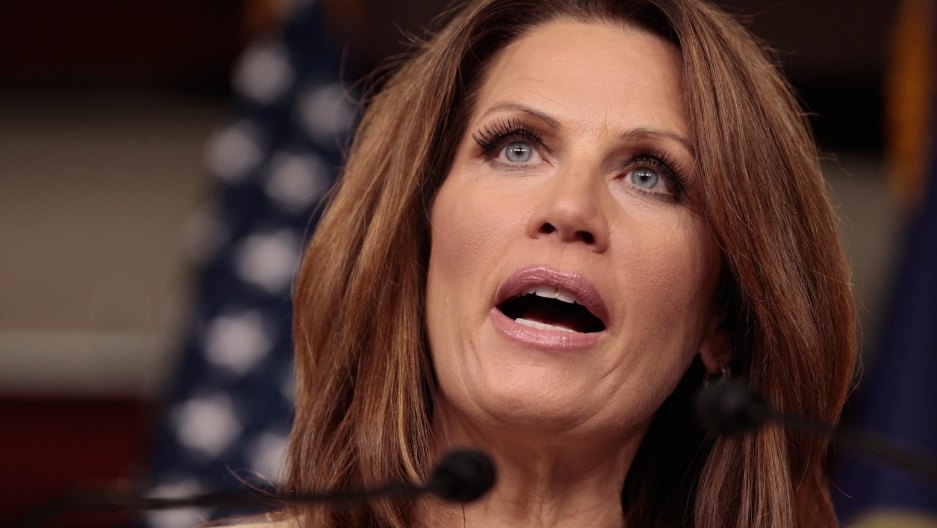 Republican presidential candidate Rep. Michele Bachmann (R-MN) delivers a response to the economic speech given by President Barack Obama at the U.S. Capitol September 8, 2011 in Washington, DC. Bachmann gave an unofficial rebuttal to the president's speech after Republicans decided to forego a formal one
Credit: Chip Somodevilla
Share

Minnesota Rep. Michele Bachmann received a big blow to her GOP presidential campaign when her top Iowa adviser announced Wednesday night that he would ditch her for Representative Ron Paul of Texas.

Iowa state Sen. Kent Sorenson told a crowd of several hundred at a Des Moines rally that “We’re going to take Ron Paul all the way to the White House,” just after he appeared with Bachmann at an event, according to news reports.

“The decision I am making today is one of the most difficult I have made in my life,” Sorenson said in a written statement sent to reporters. “But given what’s at stake for our country, I have decided I must take this action.”

He continued: “But the fact is, there is a clear top tier in the race for the Republican nomination for President, both here in Iowa and nationally. Ron Paul is easily the most conservative of this group.”

Bachmann responded with her own statement, saying Sorenson jumped ship for money, and named state Rep. Brad Zaun as her new state chair.

“Kent Sorenson personally told me he was offered a large sum of money to go to work for the Paul campaign,” Bachmann said. “Kent said to me yesterday that ‘everyone sells out in Iowa, why shouldn’t I?’ Then he told me he would stay with our campaign.”

Bachmann has steadily been losing steam in the 2012 GOP presidential race. The Huffington Post billed the entrance of Texas Gov. Rick Perry in the presidential race as the start of the end for her.

A new poll of likely Republican voters in Iowa showed Bachmann trailing second to last at 9 percent compared to frontrunners Mitt Romney and Paul, at 25 and 22 percent respectively.

Two influential pastors said on the same day of Sorenson’s departure that they wanted either Bachmann or former Pennsylvania Sen. Rick Santorum to drop out of the GOP presidential race so that support among evangelical voters won’t become fractured, the Associated Press reported.

“Congressman Paul is delighted to accept the endorsement of Senator Kent Sorenson, whose blessing and assistance carry a great deal weight in Iowa,” said Jesse Benton, chairman of the Paul campaign. “The fact that he doesn’t take this decision lightly tells a great deal about the senator and Ron Paul.

Bachmann insisted she would see the coming Iowa caucus campaign despite the setback.