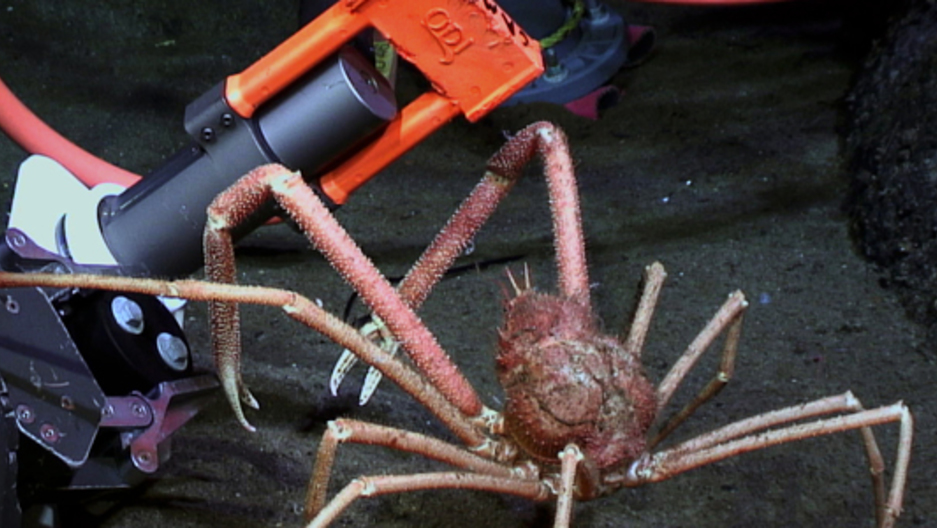 Benoit Pirenne walks down a winding rubble path in a fjord on Canada's Vancouver Island.

He points toward the water, to a sign that reads, "WARNING: CABLE.

"The cable is going underneath here, and it's going out 800 kilometers in a big loop in the ocean," he says.

The cable connects to a network of scientific instruments deep in the Pacific Ocean. The network is called NEPTUNE Canada. (NEPTUNE stands for North East Pacific Time-Series Underwater Networked Experiments.)

The network was set up by Pirenne and his colleagues at the University of Victoria two years ago. It continuously monitors the ocean environment, recording all sorts of information, including sound.

Pirenne takes me to a shore station a few minutes' walk from the coast.

"This is where the first acquisition of the data is taking place," he says.

Once the stream of data arrives at the shore station, it is relayed to the University of Victoria. From there, it's sent to scientists in Canada and around the world on the Internet.
A Global Network

On the other side of the planet, in Spain, Michel André has been listening in.

"This is like big ears that are placed on the bottom of the ocean," he explains. "And these ears constantly get the sounds."

André is a bioacoustics expert at the Technical University of Catalonia, in Barcelona. He studies how human-made noises in the ocean affect whales and dolphins.

He wanted to share the sounds of the ocean with the general public to show how human activities are altering the marine environment.

So, a few years ago, André launched an ambitious global project called Listening to the Deep Ocean.

The project connects deep ocean observatories like the one in Canada to a single website. Go to the site and you're greeted by a whale swimming across your screen, the scene complete with sounds of water and whale calls.

Click on the whale, and you arrive at a page with an image of the earth that spins slowly when you place your cursor on it. Scattered across the globe are a handful of green and blue dots that represent individual observatories. Most of them send sounds in real time to the website.

To listen in on what's happening in the ocean, all you have to do is click on a dot.

Software developed by André's team identifies the different sources of sound and indicates what they are — dolphins, for instance, or ships — in a color-coded display.

The deep-sea observatories also pick up sounds of geological processes. Observatories off Japan recorded the devastating earthquake that triggered the tsunami earlier this year. Those sounds — sped up so they are audible to the human ear — are in the website's sound library.
The Navy's Concerns

The ability to listen to the world's oceans isn't exactly new.

During the cold war, the US Navy set up a network of underwater microphones in many parts of the world to track Soviet submarines. For decades, the sounds of the deep sea were considered highly sensitive military information.

Now that civilian scientists and the general public can listen in, the US Navy is uneasy.

Consider the region off Vancouver Island where scientists have installed microphones.

He says allowing the general public to listen to that part of the ocean poses a threat to national security because someone — he won't say who — might use that information to target Navy vessels.

To reduce that threat, the US and Canadian navies struck a deal with scientists at the University of Victoria. It gives the navies control over the acoustic data.

Winokur says when there are naval operations in the region, the navies redirect the stream of sound.

"Rather than it being sent to the Internet in real time, we divert it to a naval facility where the data are screened and returned as soon as possible to the University of Victoria," he explains.

In other words, the sound is scrubbed to remove noises from naval vessels.

Scientists at the University of Victoria's NEPTUNE project aren't complaining about this set up, at least not openly. But the US Navy hopes eventually to work out similar arrangements with ocean monitoring systems elsewhere in the world.

Cornell University ocean acoustics expert Christopher Clark says scientists outside the US and Canada are unlikely to comply with the US Navy's request to scrub their data.

"The strategy that they're using with NEPTUNE is a dead end," he says.

Clark says the US Navy doesn't own the ocean acoustic environment and has to accept that what was once military technology is now in the hands of civilians.

This is similar to what happened with satellite imagery. For decades, it too was sensitive military data, but now anyone can go on Google Earth and look down from space.

Clark says whether the Navy likes it or not, the public will increasingly listen to the oceans.

"The cat's out of the bag, the horses are out of the barn, whatever the metaphor is, it's happening," he says.

Indeed, the number of observatories on Michel André's website is growing.

The site currently links to listening posts only in the Northern Hemisphere, but soon it will be connected to microphones in the South Pacific, South Atlantic, and Southern Indian Ocean. And that will open up an even bigger swath of the deep sea to our ears.