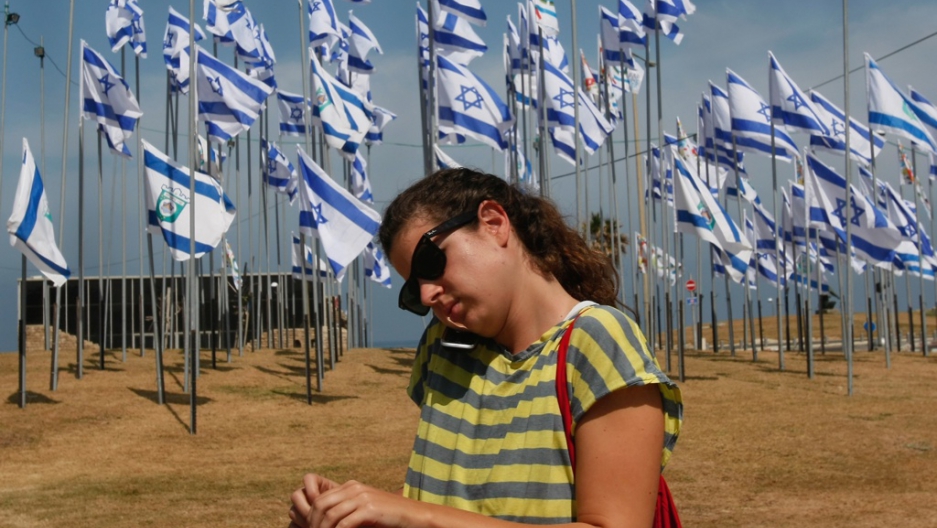 An Israeli woman chats on her mobile phone as she passes a sea of Israeli flags on April 28, 2009 in Tel Aviv, Israel.
Credit: David Silverman
Share

JERUSALEM — You arrive at the airport ready for a flight, but are abruptly pulled aside and detained. A routine traffic stop by the police leaves you stranded by the side of the road without your driver’s license. You whip out your credit card to pay for a restaurant bill, and the maître d’ quietly rejects and confiscates your card.

If you are very lucky, a repo man shows up at your house and impassively delivers an injunction: your bank account has a lean on it. Your life insurance has been cashed out and decimated.

What’s going on in Israel, where every month, thousands of surprised citizens face these predicaments?

More from GlobalPost: Israel to shift tax burden to rich and corporations

The law appears to contravene important provisions of the nation’s Basic Law, the body of jurisprudence that stands in the place of a written constitution, such as that of freedom of movement. It has yet to be challenged in court.

But it is one of the realities of Israeli life that provoked the feelings of alienation that spurred the social protests of the past six months. The companies and cartels may be pulling in large profits, but their clients often feel duped.

“I’m just waiting for someone with the means to file a massive class-action suit for damages,” says Jerusalem attorney Abraham Zada Harpaz, who specializes in these cases. “In the past two years you see people simply reduced to rags, down to their last slice of bread, because of this law.”

Banks, companies and debtor’s agencies now have direct computer linkages to records kept by the national Enforcement and Collection Authority. A company claiming even a paltry debt, years old, can easily revoke a person’s permission to exit the country or cancel their driver’s license.

Such is the case of “Ilanit,” a woman whose story was highlighted in a Yedioth Acharonoth exposé of these practices. From 2001 to 2005, Ilanit was a client of the cable company YES. After cancelling the service, she signed up for a rival company, HOT. On Dec. 1 of this year, she received a notification informing her that her travel privileges had been suspended due to a debt to YES.

Upon inquiring, she was told that YES claimed she owed them a converter, now six years old, and that her father, Eli, had been served with a notification of the debt. “I gave them back their converter when I left them, and my dad’s name is not even Eli,” she told Yeditoh Acharonoth, an Israeli daily newspaper.

More from GlobalPost: Israeli protests, even in their end, pose challenge to government

(The law demands timely, signed notification of such claims to the debtor, not to a family member.)

My discovery of the new measures came last March, as I attempted to cross the border into Jordan. Separated from a group of friends, I was pulled into a small office and informed that I was not allowed to leave the country. Why? The officers said I had an outstanding debt in the Rehovoth office of the Collection Authority.

I tried to recall the last time I had been to Rehovoth, possibly 10 years ago. The border police officer could not tell me the amount of the debt, to whom it was owed or why. There was no way to pay the debt and cross the Israeli-Jordanian border. I was, in fact, detained.

Subsequent inquiries revealed that Cellcom, a cellular phone company I cut ties with 12 years ago, after their failure to repair a malfunctioning phone still under warranty, claimed a debt of 8,500 shekels ($2,250). Like most other people embroiled in this web, I have no criminal record.

“They play fast and loose with these notifications,” Harpaz said. “That’s the worst part. And they let the debt accumulate on purpose. It's part of the way they operate. Let’s say someone starts out with a loan from a bank, or a small debt. You can start out owing someone 2,000 shekels (about $530.) No one informs you of the debt. The bank or the company takes it to court and gets a summary judgment in your absence. Then you’re immediately slapped with legal fees, interest-rate adjustments and dollar linkage. Before you know it — literally, before you know it — you owe 10,000 shekels ($2,645).

More from GlobalPost: Stalwarts of Arab Spring give advice to Occupy Wall Street

“They put a lean on your bank account; they cash out your insurance policies, incurring penalties, and leave you with 20 percent of what you had. They have your passport linked to a no-travel list. And the kick is, you don’t know the first thing about it. And there is no way you can negotiate with them.”

The new practices have become so commonplace that now neighbors involved in banal disputes find themselves competing over who will get to a judge first, in order to claim a debt, and paralyze the life of the other.

Cellphone companies, who operate in an essentially unregulated market in Israel, are notorious.

Andreas Guggenheim, 38, a Chilean who has lived in Israel for the past 8 years with his husband, Felipe Alee, has found himself embroiled in one such muddle. The couple started out with a “family plan” at Orange. About seven months ago, wanting a change, Guggenheim shut down his line and cancelled the service. Alee kept his number, but upgraded to an iPhone. The new contract was passed to Alee’s name.

Last September, right around the Jewish New Year, Guggenheim noticed that odd amounts of money ranging from 400 to 700 shekels were regularly being withdrawn from his bank account. Suspecting Alee, he asked, “Honey, have you taken any money out?”

No. It was Orange, the company he had severed his contract with, still charging him.

“It’s a mess. All they can tell me is that we once had an account with two active numbers and now we don’t. They say, ‘We know you haven’t used the phone. And yes, we are charging you.’ To me it looks like when Felipe activated his iPhone they just decided to charge me too. No one at the company can explain what they are doing.”

Guggenheim has refused to pay. Orange now claims his debts have accrued to 3,500 shekels ($925). The company lawyers are after him, and “I’m just trying to shut everything down before they try to take my bank account or do something else. At this point, I don’t know anyone who hasn’t run into this kind of problem. It’s out of control.”

Numerous attempts by GlobalPost to receive a response from Orange and from Cellcom went unanswered.

Israel’s collections agencies are overwhelmed and verging on losing control of the situation. In recent months, the Enforcement and Collection Authority has begun forcing companies to offer their debtors deals whereby some of the hundreds of thousands of open files can be resolved. Last month, it was Motorolla. This month, it is Cellcom. Cellcom alone claims more than 27,000 debtors owing debts originating previous to 2009.

Some of the “debts” are comically spurious in nature. One of Harpaz’s favorites involves a cellphone company salesman offering a client “free internet” over the phone. Next thing? “The poor guy gets a 3,000 shekel bill at the end of the month, and it is up to him to try to prove that some salesman duped him. Sometimes it’s a student, who can never really pay this off. And then you know what happens. They go to court, they up the charges, and it’ll never end.”

“On the up side,” Harpaz says, “people who really owe money, who took out loans and failed to pay them back, are being forced to come to terms with things.”