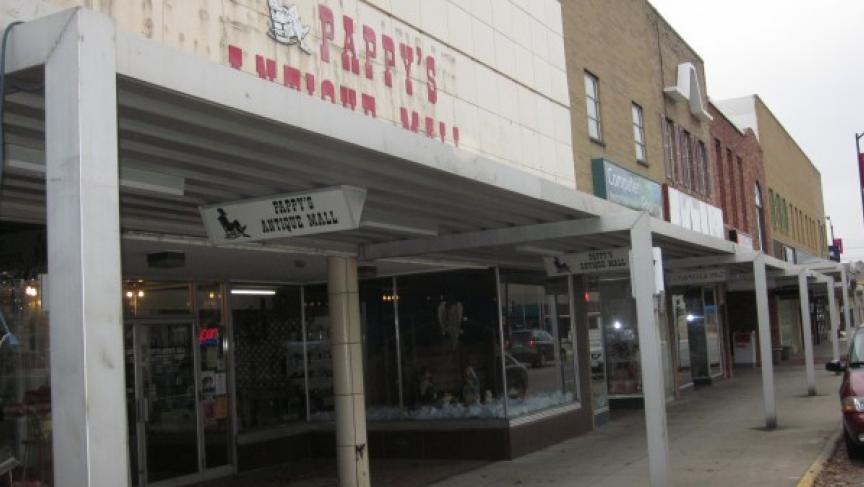 In Newton, Iowa, people are trying to figure out how to rebuild the local economy after Maytag shut its doors. (Photo by Jason Margolis.)

The economics of Iowa look pretty good on paper.

It has the seventh-lowest unemployment rate in the nation. Corn has been fetching record prices in recent years. Des Moines and the other metropolitan areas are thriving. Forbes Magazine recently ranked Des Moines the number one city in America for young professionals.

But not everywhere in Iowa is prospering. Rural manufacturing towns continue to struggle. Young people have been leaving these small communities in droves since the 1980s.

Take Netwon, population 15,000, for example. It was the quintessential company town — Fred Maytag began building his washing machines in the central Iowa town in 1893. Company and town prospered together for more than a century.

In the past decade though, the company shifted jobs to southern states and Mexico. In 2007, Maytag, which was purchased by Whirlpool, closed its doors in Iowa.

“Definitely that was a demoralizing blow to the town,” said Darrell Sarmento, who directs the Greater Newton Area Chamber of Commerce. “Not just from an economic standpoint, but at one point in its heyday, Newton was the washing machine capital of the world. So that was a lot of the town’s identity.”

Newton is trying to avoid that fate, not become like so many other other Midwestern manufacturing towns that have lost industry to cheaper foreign markets.

Over and over, you hear that the best way to avoid that downward spiral is to invest in education. That’s a message that community leaders in Newton are embracing.

In the old, cavernous Maytag factory, Terry Norton pointed at old railings along the ceilings used to move heavy equipment and other relics from a bygone era. Norton is director of the career academy for Des Moines Area Community College. DMACC has taken over parts of the building to train students for higher-skill trades like welding, autobody repair, nursing and cooking.

This isn’t your typical college campus. Laid off Maytag workers have skewed the demographics older.

“I would’ve been 47-years-old, and I made the decision to go back to school,” said Jenny Michael, a former assistant to the general counsel at Maytag.

Michael got a degree in business administration. She’s working again, but she misses her days at Maytag.

“People don’t give raises as easily,” she said. “I work part-time now, as opposed to full time before, but that’s been a benefit to me.”

Michael is one of the lucky ones. Economist David Swenson at Iowa State University said the transition to life after Maytag has been rough for people in their 40’s and 50’s.

“Many try to go back to school. We have federal programs that try to help them retrain, re-skill, re-pot themselves back into the economy. The success rate isn’t that great,” Swenson said. “It works best for younger people. It works not so well for older people. And what happens if these workers do find work? They very, very often find work at even less than half of what they were making before.”

Swenson said towns like Newton have to diversify their economies and their workforce. Frank Liebel, executive director of the Newton Development Corporation, said that’s happening. And he said people are finally getting over the loss of Maytag.

One piece of the puzzle is the Iowa Speedway, which opened its doors in Newton five years ago. It’s Iowa’s only professional sports complex, a place where “the action is non-stop, where you start your day tailgating and end it partying,” according to one pumped-up advertisement.

Community leaders say the speedway will help put Newton back on the map. But it can’t turn the local economy around by itself.

“When the racetrack is running, and there are people at the speedway, everybody is full. That’s four weekends a year,” said John Gerken.

He and his wife own the August Bergman Inn in Newton, a charming bed and breakfast built a century ago. “You don’t make it on four weekends a year," he added.

A handful of smaller companies have set up shop in the area, staffed partly by former Maytag employees. They’re building things like wind blades and spotlights that use low-energy LED’s for theater lighting.

“If it was a traditional fixture, if I reached out and touched it, I would get a very serious burn, probably leave some skin on it. Whereas this, a baby could touch it and it wouldn’t be an issue,” he explained.

He’s just the kind of guy the area is trying to attract, a 29-year-old Ph.D. in plasma physics who relocated from New Jersey. Young says he chose to start his company in Iowa mostly because he got funding from a private investor. He also liked that the town of Sully, right next door to Newton, just gave him his office space, a big barn-like structure.

“It used to be a gymnasium, and it wasn’t being utilized,” Young said. “The community bought it back from the people that were using it and basically then gave it to us so that we could start this company here.”

As his company grows, though, what’s to stop him from eventually building his spotlights in Mexico or China? He looked down at a semiconductor board in his hand and said this is the future of manufacturing in America. He said the actual construction is so mechanized he doesn’t need low-wage workers.

“We hired the highly-skilled engineers that designed the schematic and the components that need to go on there. And then we have a machine that places these components, a thousand components a minute, and so why not do it here in the US?” he asked.

If towns like Newton have a future in manufacturing, that’s where it’s at. The days of joining the middle class in Iowa by tightening screws on washing machines are over.