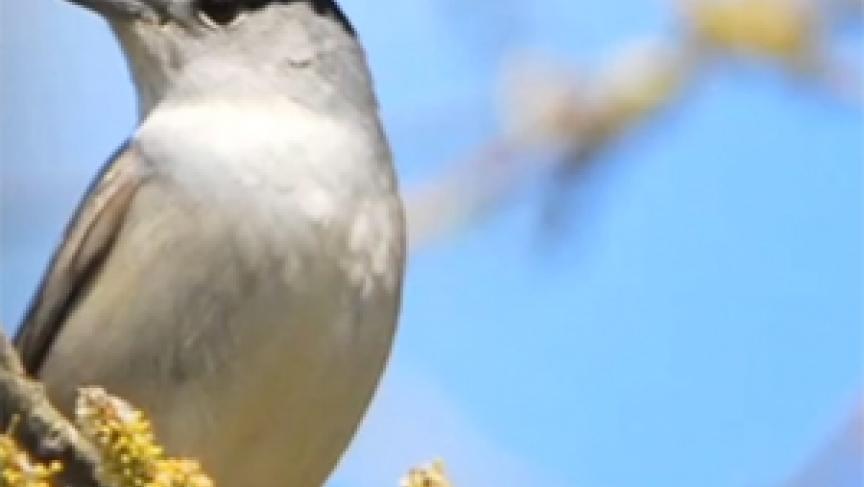 In Cyprus, poaching of the Blackcap birds is surging in defiance of a European Union ban. (Photo by József Szabó.)

Each year millions of birds fly the skies over the Mediterranean Sea migrating from Europe to Africa and the Middle East.

It’s a journey fraught with peril – severe weather, predation, fatigue, and degraded habitats can all keep a bird from completing its trip. And when many of these birds land in Cyprus to rest and refuel, they can fly straight into another danger: Illegal bird trapping.

In a parking lot in southeastern Cyprus, you can hear the song of the blackcap, but the small warblers themselves are nowhere to be seen. Their calls hurtle out of a tiny speaker playing from a tape player.

“This is a tape player, but we’ve got CD players, we’ve got it on MP3s,” said Andreas Pitsillides, who oversees crime operations at the Dhekelia military base on Cyprus’ southeastern coast.

The recordings were seized from poachers who play them to lure the birds into nets, more than a hundred at a time.

“The poachers,” Pitsillides said, “remove the birds, they kill it, they remove the feathers, and then they sell them by the dozen.”

Pitsillides said a dozen blackcaps went for more than $80 last year. They’re sold to restaurants, boiled, and eaten as a delicacy called ambelopoulia. Pitsillides and his team have confiscated a heap of trapping equipment. Just last year, they seized 600 nets, 13 shotguns and more than two miles of loudspeaker cables.

A few miles away, police officer Panikos Mihael shows a trapping site, where acacia trees have been planted to attract blackcaps. Mihael is usually on traffic duty, but when birds are migrating, he’s part of an anti-poaching detail.

He's not the sort of guy to mess with — he’s huge, and it’s all muscle. Mihael and his team hike out here in the middle of the night to sneak up on poachers.

“They may see us either through spotters or if we make some noise because usually they work in groups,” Mihael said.

Some poachers stand their ground. Others take off through the tangle of acacia trees. He’s seen men, women, kids, even the elderly poaching birds. Some 43 people were arrested last year, each facing up to three years in jail and a $100,000 fine. But the problem persists.

“Whatever you do, it’s never enough. I don’t think it’s a problem that can be solved very easily,” Mihael said.

Not long ago, it looked like the problem was being solved. In the 1990s, some 10 million birds were trapped and killed here each year, according to the NGO Birdlife Cyprus. That number fell as low as 1 million a year in the early 2000s when Cyprus was trying to join the European Union, which bans bird trapping.

“There was a real political pressure, and that’s where we saw the real sea change,” said Martin Hellicar, campaigns manager for Birdlife Cyprus. The pressure didn’t last. “Cyprus is now in the European Union, so there’s been a relaxation.”

Hellicar estimates poaching has climbed back to more than two million birds in 2010, and he says that so far the EU hasn’t taken any concrete action.

Some poachers use another illegal tool called limesticks — twigs coated with sticky sap — to catch the birds.

“If a bird gets caught on a limestick, it struggles, it often ends up hanging upside down, and the only relief comes when the trapper comes along and slits its throat,” Hellicar said.

But others see limesticks as an important part of Cypriot culture.

“This tradition comes from my father and grandfather,” said Tavro Nufidu, who runs a shooting club in southeastern Cyprus.

He said the limestick tradition dates back centuries, and he’s teaching his four boys how to hunt with limesticks. Nufidu figures he catches between 500 and 600 blackcaps in a season. Limestick supporters also dispute charges that it’s cruel.

“The bird doesn’t stay on the limestick for hours and suffer – not more than three, four minutes,” said Antonis Kakoulis, president of the Cyprus Hunting Federation. “The trapper is there to catch it immediately.”

Kakoulis also dismisses concerns that limesticks kill millions of birds a year and he does condemn blackcap netting. But he said people should be allowed to use a few dozen limesticks on their own property.

Conservationists argue against both methods. They also worry it’s not just blackcaps that are dying. More than 100 types of birds get caught in the traps; sometimes non-blackcaps can amount to two thirds of the catch. And while the overall blackcap population is still healthy, some of the other casualties are members of endangered species.

That’s part of the reason delegates to a recent conference in Cyprus on illegal bird killing voted to support a zero-tolerance approach. Boris Barov, a conservation manager with Birdlife Europe, said that means a wider crackdown.

“The most important thing they should do is to actually close down all those restaurants which serve illegally trapped birds and their owners (should be) fined,” Barov said. “That will be the only way to reduce the demand.”

That’s a tall order. It’s the Mediterranean mentality, said Pantelis Hadjigerou, Cyprus’s Director of Game and Fauna. The guy who used to have this position was killed by a bomb in 1999. So Hadjigerou proceeds cautiously. Still, he said his agency is very active.

“We have taken in the last few years more than a thousand cases to court,” he said.

And yet, untold numbers of birds continue to die in Cyprus every year. It isn’t migration season now, so the trees and fields of southeastern Cyprus are mostly quiet. But what happens with bird trapping here remains to be seen.