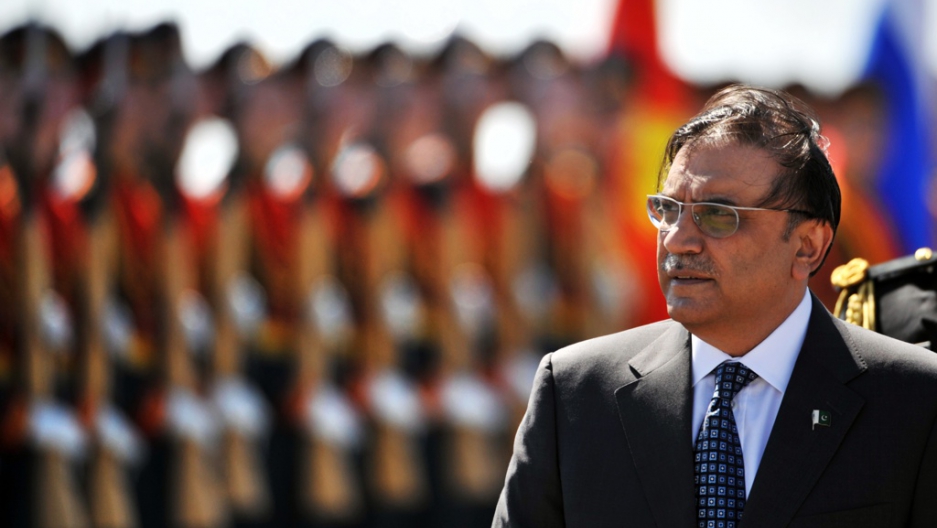 ISLAMABAD, Pakistan — In an address to tens of thousands of party supporters Tuesday, the fourth anniversary of his wife’s assassination, Pakistan’s beleaguered president Asif Ali Zardari confronted widespread rumors that he intended to resign.

“I’m a constitutional president,” he said defiantly from Garhi Khuda Baksh, a town in the southern province of Sindh, near the mausoleum where his wife is buried. He urged “all the democratic forces and the patriotic Pakistanis to foil all conspiracies against democracy and democratic institutions.”

Zardari abstained from directly mentioning his strained relations with the country’s powerful army, which some in Pakistan believe is secretly working to hasten the end of his presidency. The reconciliatory tone seemed to be in line with the country’s prime minister, who publicly denied rumors Monday that the government planned to sack the country’s two most-senior military chiefs.

More from GlobalPost: Is Pakistan's military planning a coup?

Not addressing the military’s out-sized influence on civilian politics, however, also showed how weak Zardari’s position had become, analysts said.

“He is in no position to take the establishment on,” said Talat Hussain, a senior analyst for the Pakistani channel DawnNews, referring to the country’s military and its intelligence agencies.

Zardari was married to former two-time prime-minister Benazir Bhutto, who as head of the popular Pakistan People’s Party (PPP) was designated to become prime minister once more after the elections in 2008, but was assassinated on Dec. 27, 2007. The perpetrators were never caught, and a court case against those responsible for her security is still pending.

Zardari and his 22-year old son, Bilawal, took over control of the PPP after her death but never managed to establish the same level of legitimacy as Bhutto.

From behind bulletproof glass, the 56-year old president appeared defiant, confident and resolute in his first public appearance since several scandals and rumors of his impending resignation began to haunt him earlier this year.

The rumors reached new heights on Dec. 6, when Zardari unexpectedly left Pakistan to seek treatment at a Dubai-based hospital amid conflicting explanations from his party members. A week later, his physician stated that all medical tests turned out to be within “normal range,” though the president had experienced a few seconds of unconsciousness.

His sudden departure to Dubai came as the country’s Supreme Court announced it would revisit a case involving alleged presidential corruption and take on another one involving a memo that — if linked to Zardari — could result in treason charges.

The memo asks for Washington’s help in warding off a military coup in exchange for eliminating a section of the Inter-Services-Intelligence, or ISI, that allegedly maintains links with Afghan insurgent groups, and other changes to Pakistan’s national security system. Zardari and his government deny any links to the memo.

Today, the Supreme Court, which is considering an investigation into the scandal after it received a number of petitions from opposition leaders, adjourned the case until Wednesday. Zardari didn’t directly address the memo in his speech, but said that the Supreme Court should prioritize the case involving the death of his wife, Benazir Bhutto.

Conspiracy theories that Zardari would either resign or be driven out by the military were given more weight by the relative silence of this part’s leaders in recent weeks. In his speech, however, the president dismissed the need for his party to do the rounds on Pakistani talk shows — by far the most popular broadcasts on Pakistani television — because they “disrepute” politicians.

“We want to make history instead of headlines,” he said.

Zardari appeared undisturbed by the fast-emerging opposition party Tehrik-e-Insaaf, or Movement for Justice, which some believe has the support of Pakistan’s army. Two days ago, it staged a massive rally with about 100,000 supporters, which was broadcast live on Pakistan television. In contrast, coverage of Zardari’s rally was limited to the president’s speech.

Pakistan’s economy is struggling under rising inflation, a lack of foreign investment, growing poverty, and electricity and gas outages, fueling discontent with the current government. But Zardari appeared disconnected from such realities.

“The world is facing recession. But in Pakistan we have food even after facing disasters like the floods,” he said.

The president also lambasted a group of influential religious parties that have fiercely opposed his government’s plans to increase trade with India.

“We are everyone’s friends and no one’s enemy. We will do trade with everyone and anyone we want to do it with,” he said.

The president’s speech covered nearly 58 topics in 33 minutes and therefore lacked focus, Hussain said. But in Pakistan the message is not all that counts. Apart from showing the capability to gather large crowds, Pakistani political parties draw their strength from individual figures, Hussain said.

“The symbolism of having him appear in public and speak is still important. It is politically reassuring for the Pakistan People’s Party,” he said.