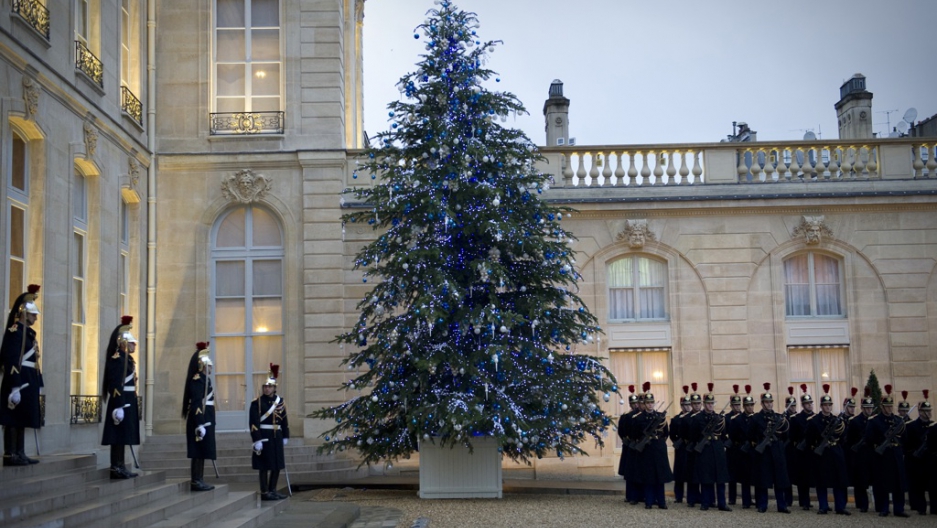 Guards stand near a Christmas tree at the Elysee presidential palace in Paris. Some communities are adopting trees, and replanting them after the holidays.
Credit: Lionel Bonaventure
Share

ST. STEVENS-WOLUWE, Belgium — You have to admit that it’s a strange tradition. Every year to celebrate Christmas, we Westerners cut down a young conifer, drag it home and adorn it with lights and ornaments. Then we admire it proudly as its life slowly ebbs away in our living rooms.

When all the gifts have been opened and celebrations are through, we abandon the object of our affection curbside, for the garbage trucks to pick up.

But in some Brussels suburbs, people are taking a greener approach — and one they think is more respectful of the honored conifer and the rest of the planet.

In the house of Ilke Pedersen, the Norwegian spruce is a revered guest. It sits on a pedestal, with a perfect view out the large front-room window. The room temperature is maintained in a precise comfort zone for the green needles and Pedersen’s kids argue over who gets to make sure the visitor’s drink never runs dry.

They want the Christmas tree to be as merry as it makes them. That’s right: they’re not just using their spruce for a quick holiday thrill; they’re thinking about its feelings as well, making sure it’s satisfied, appropriately honored, and that it enjoys a long and fruitful future.

The Pedersens are clients of “Be Green — Rent-a-Tree,” a student-run business at the Hof-Kleineberg International Montessori School. Their spruce is just a temporary tenant, roots intact, safely ensconced in a large pot.

They watch closely for feedback indicating conditions are not up to par. Already, a few needles are on the floor, and Ilke Pedersen admits that makes her a bit nervous.

Adding to the pressure, she houses one of the project’s quality-control officers: her 11-year-old son Emil, who disapprovingly eyes the holiday finery hanging from the limbs: “there are some branches that are hanging too much,” he announces.

A committed environmentalist, Pedersen says seeing the masses of cut trees for sale in the markets makes her “just feel like crying,” especially knowing this is happening all over the world.

But the good news is that the idea of recyclable living Christmas trees is spreading too. An American company, “The Original Living Christmas Tree Co.,” for example, has been open since 1992 and has seen its West Coast business expand exponentially. More such ventures are popping up around the US.

In Brussels, Rinze Hoekstra, founder and director of the Hof-Kleineberg middle school, started the program on a whim three years ago, with 24 trees. He wanted to share what he considered a worthy tradition from his childhood in Frysland, Netherlands. He had fond memories of his families’ Christmas trees continuing their post-holiday lives in the front yard.

“The first year was basically my vision,” Hoekstra said, because nothing like it had been done before with the students. “This year, it was almost an independent exercise. Now they own it.” The children, age 11 to 16, are now comfortable with concepts like “design cycle” and “performance metrics.”

They do the manual labor, digging up the trees and dragging them up stairs to customers’ homes. They’ve also created a manual to go with each tree, detailing its background and the care it needs. They ask the “adopters” to describe everything their trees see and hear during their visits.

“If they’re inspired, they can do anything!” says the middle school’s technology guide, Brian Thelen, with obvious pride.

The students are all business when it comes to talking about the project.

Thirteen-year-old Thomas Wagner asserts that his job on the operations team is “the most hard” because you have to dig up the trees for their Christmas jobs and put them back afterwards in a very special way. “You can’t touch the root ball” he instructed, “or else the tree can die in a few weeks and that would be pretty sad.”

Masa Micunovic, a quality-control team member, points out that the trees are usually given a year off in between their assignments “because they need some time to relax.”

Milwaukee native Rachel Blumenthal, 11, is tasked with tagging trees with their adopters’ names. Some families wanted the same trees they’d had in previous years, while others pick out new ones. She thinks she’d rather do customer service next year because instead of dealing with trees “you get to talk to everybody.”

Ignacy Nalczy plans to be a physicist, but nevertheless appreciated what he has learned on the transport team. “We had to make maps to find the shortest way to [transport] the tree and use the least petrol, which is important,” he said.

Fifteen-year-old Laura Deltenre says making deliveries “was more complicated than we expected,” as it was sometimes hard to find customers’ homes. She says it’s fun to see the excitement of children when their trees arrive, but is disappointed they couldn’t accept the drinks customers would often offer them, because the schedule was tight and “time is money!"

Anne Zijl said she was looking at things from their trees’ point of view. “The trees have stories because they are living beings and it’s interesting to think about what your tree sees during the Christmas holidays while it stays with you,” she says. “It wouldn’t surprise me if they could think.”

Alas, therein lies some disagreement. While everyone agrees that the trees are worth saving, do they really have feelings, like people?

Over at the Stevens-Ho household, 12-year-old Serena has worked the last two years on the project, which her father Yeong compares appreciatively to an MBA for middle-schoolers. Serena admitted she didn’t quite buy into the idea that the trees were sentient beings. She was being very careful not to weigh down the branches but ventured that “I don’t really think it cares what songs we sing.”

Her 10-year-old brother William was more of a believer, asserting the tree “will enjoy Christmas carols,” promising it a rendition of “Jingle Bells.” He also seemed to feel a little sorry for the spruce, saying it probably was thinking “I’ve got to hold this stuff up for two more weeks?!”

The kids’ work has earned recognition far beyond the Brussels suburbs. Last year their school became a pilot institution for Jane Goodall’s “Roots and Shoots” program, and they presented their project — and a special monkey tree — to her personally on a visit here. Ilke Pedersen, who serves as the organization’s representative in Brussels, said it was a magical moment for everyone involved. “They were so proud,” she recalled. “You could really see it was their project.”

A special bonus: Jane Goodall, environmentalist extraordinaire, had never heard of recyclable Christmas trees. She was delighted with their initiative.