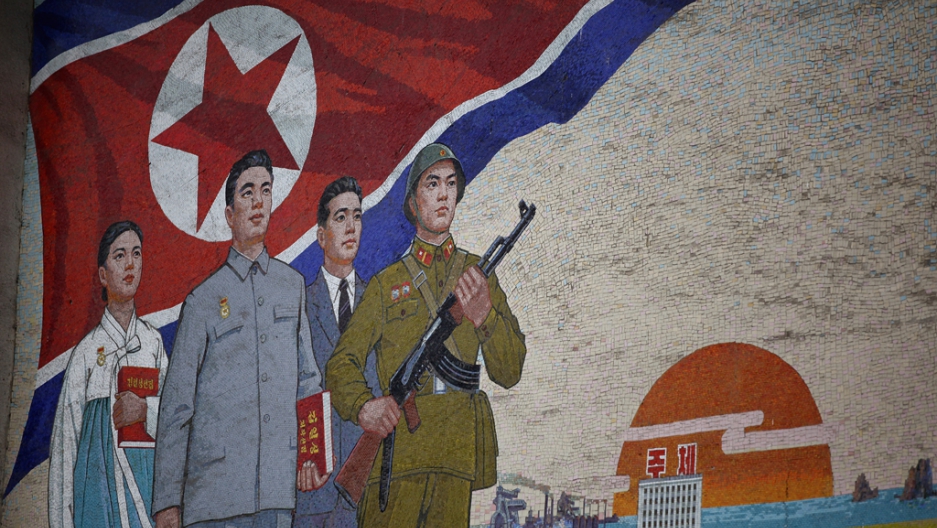 SEOUL, South Korea — North Korea is playing a skillful game of funeral diplomacy that’s dividing South Koreans and leaving everyone to wonder what's going on in the corridors of power in Pyongyang.

All North Korean strategists have had to do is issue a huge welcome to all those down here who would like to join “condolence delegations” for ceremonies surrounding the funeral next Wednesday for the late lamented Dear Leader Kim Jong Il.

As far as the would-be hosts in the North are concerned, they can even come by road through the truce village of Panmunjom rather than make the circuitous, and expensive, journey by air via Beijing.

More from GlobalPost: Why the North Koreans weep

The notion of opening up the border crossing for travel to the funeral upsets authorities in the South who see the North as carefully playing upon pro-condolence and anti-condolence sentiments here.

Korean conservatives believe President Lee Myung Bak has gone far enough in approving a message of “sympathy to the people” of North Korea — well short of condolences — while permitting those who want to send their own condolences to go ahead and do so.

At the same time, North Korea’s official website, Uriminzokkiri, the one that foreigners, not ordinary North Koreans, get to see, warmly welcomed South Koreans yearning to join the funeral crowd. For those who might have trepidations, the site promised “the convenience and safety of South Korean condolence delegations will be fully guaranteed.”

The website coupled that assurance with a scolding for what it called “unacceptable and inhumane action" and a promise to “keep in mind those who do not understand even the most basic respect and humanity.”

The state media followed up on that dark hint by coming up with an emotional phrase to show that Kim Jong Un, Kim Jong Il’s third son, is really taking charge. The party newspaper Rodong Sinmun on Saturday hailed Jong Un, in his late 20’s, as “supreme commander in heart,” meaning he’ll get the title soon after the funeral.

Leaving little doubt the North’s hard line policy will endure, the diatribe called for “completing the ‘military-first revolution’ under comrade Kim Jong Un as our supreme commander and our general.”

More from GlobalPost: Does South Korea even care?

All of which creates a problem for South Korean authorities who have refused to send an official delegation, have banned opposition politicos from doing so as well and don’t appear interested in opening up the Panmunjom crossing.

All they’ve agreed on so far is to permit two widows whose husbands had unique, tragically interwoven records in pursuing rapprochement between South and North to lead their own “condolence delegations.”

They're invited to ceremonies including the viewing of the body in its glass coffin — though not the funeral itself, which is closed to all but a select inner circle.

Who are the South Korean widows heading to funeral ceremonies?

First is Lee Hee Ho, the widow of Kim Dae Jung, the president who articulated a “Sunshine Policy” of reconciliation with North Korea. Kim and Lee flew to Pyongyang for the first inter-Korean summit with Kim Jong Il in June 2000, which proved to be the crowning moment of both of their lives. Kim won the Nobel Peace Prize six months later.

Asan was the name of the village near the east coast of North Korea, a few miles above the Mount Kumkang region, from which the elder Chung fled at the age of 18 after stealing one of his father’s cows to seek his fortune in the South.

Chung Mong Hun was in the retinue of the 130 top bureaucrats, politicos and business leaders who accompanied Kim Dae Jung on that historic flight from Seoul to Pyongyang. It was through Chung and his father that North Korea had first signaled interest in an inter-Korean summit.

There was, however, one catch that was not revealed until long after the summit — South Korea had to transfer at least half a billion dollars into North Korean coffers to grease the way to Pyongyang, and Hyundai Asan was the principal conduit.

Chung Mong Hun, committed suicide in August 2003 two months after his indictment for his role in the payoff. His father, Chung Ju Yung, who had died in March 2001, had presumably urged him to assist in expediting the bribe.

The widow Hyun Jeong Un's misfortunes were far from over after she inherited what was left of the Hyundai group after Chung Ju Yung left the most prosperous entities, including Hyundai Motor and Hyundai Heavy Industries, the ship-builder, to Mong Hun's brothers.

Hyundai Asan lost its billion-dollar investment in the Kumkang tourist zone after the North took it over this year and asked the Chinese to operate the tours.

The reason was that President Lee had cut off all tours to the zone after a North Korean guard three years earlier shot and killed a South Korean woman who had wandered outside the carefully designated tourist area to look at the sunrise. Lee adamantly refused to countenance resumption of tours until the North agreed to permit the South to investigate the tragedy — something the North was not about to do.

For Hyun Jong Un, a show of mourning at Kim Jong Il’s funeral is to be a public relations gesture in support her dream of recovering the Mt. Kumkang tourist complex.

In any case, she has another reason for courting North Korea — Hyundai Asan still operates the industrial zone at Kaesong just across the line in North Korea next to Panmunjom. Nearly 100 small and medium South Korean enterprises now run factories in Kaesong staffed by about 50,000 North Koreans — the harbinger perhaps of more operations in the North and more business for Hyundai Asan.

What about Kim Jong Un's siblings?

Quite aside from the question of condolences from South Korea, the greatest question surrounding the mourning will be the roles of Kim Jong Il’s offspring other than his anointed heir, Kim Jong Un.

His playboy eldest son Kim Jong Nam has been living it up in Macao for years. Once a likely successor, Jong Nam lost out after he was nailed by Japanese immigration officials in 2001 trying to get through Tokyo's Narita airport on a fake Dominican passport. All Kim Jong Nam, wanted to do, he said, was take his son to Tokyo Disneyland.

Jong Nam, the son of the Dear Leader’s first wife, and his two younger half-brothers had reportedly been to Disneyland as kids. All of them were traveling to Japan on phony foreign passports with the mother of the younger brothers, Kim Young Hee, whom Kim never married before she died in 2004.

Just how Jong Nam, now 40, got along with them isn't clear, but it seems certain that the inner cricle in Pyongyang deosn’t want him getting close to Kim Jong Un. Attendance at the funeral would be not so much an embarrassment as a potential threat to Jong Un’s new role.

It’s not clear whether the middle of the three brothers, Kim Jong Chol, will be visible at the funeral either. Jong Chol, now 30, has been living quietly in Pyongyang, not viewed as real competition since his father passed him over as effete, possibly effeminate.

He will probably remain unseen on television even if he’s somewhere close by.

The lone daughter and mysterious son

As for the daughter whom Kim Jong Il had by his second wife, and a much younger son he’s also rumored to have had, it’s assumed they won’t be visible either.

The non-role of the siblings, however, may be less significant than the roles of all the other power players.

Who goes to the funeral, where they're placed and what they do in the ceremony remains to be seen.

Kim Jong Un nominally heads the funeral committee, but it’s not at all likely he had much to do with the selection of its 230 or so members.

All one knows is that Jang Song Taek, a vice chairman of the national defense commission that Kim Jong Il chaired, seems to be the regent. That has a lot to do with the influence of his wife, Kim Kyong Hui, Kim Jong Il’s sister.

No one is likely to know where they really stand, however, until the transition shakes out — and other faces possibly emerge as contenders.