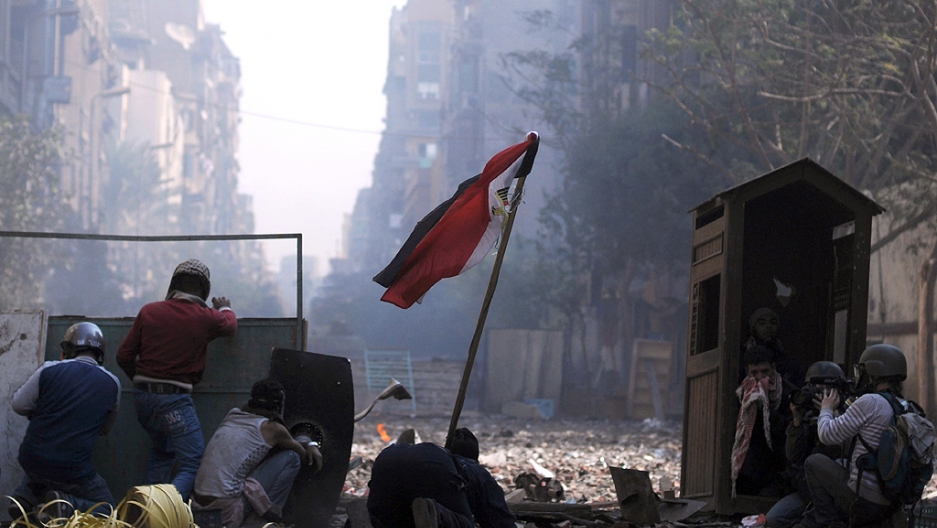 Journalists (L) cover events as Egyptian protesters clashes with riot police along a road which leads to the Interior Ministry, near Tahrir Square, in Cairo on November 23, 2011.
Credit: MOHAMMED HOSSAM
Share

Several of the Middle Eastern countries that experienced political unrest and continued protests over the past year are among the world’s most dangerous places for journalists, according to a new list released by Reporters Without Borders.

A total of 66 journalists were killed and more than 1,000 injured while working this year, according to the media rights watchdog.

A look at the recent clashes in the streets near Cairo's Tahrir Square, the epicenter of Egypt's January uprising against former president Hosni Mubarak, offer some insight into the danger for reporters.

More than one dozen journalists were assaulted by Egyptian security forces during a crackdown on the media, said the Committee to Protect Journalists.

"This was a clampdown on information, on trying to prevent these kinds of pictures from emerging," said Democracy Now! correspondent Sharif Abdel Kouddous.

At a press conference earlier this week, Egypt's military rulers accused the media - both local and foreign - of helping to spread false information and foment discord in the streets surround the square.

Here's Ahram Online, a division of the state-sponsored newspaper, on the crackdown:

In the recent military raid on Tahrir Square, media personnel and cameras became a primary target. Men in military uniform, assisted by plainclothes men, confiscated cameras and smashed them.

Reporters and filmmakers on rooftops surrounding the square were not excluded from the attacks. Al-Jazeera English producer Adam Makary told Ahram Online that 20 plain-clothed men stormed his hotel overlooking the square and smashed any camera they found.

Evan Hill, another journalist for Al-Jazeera English, was beaten and detained during the attack on journalists in Tahrir:

I'm fine. Was detained in cabinet after being beaten by army and men in plainclothes during crackdown. Getting head injury checked at hosp