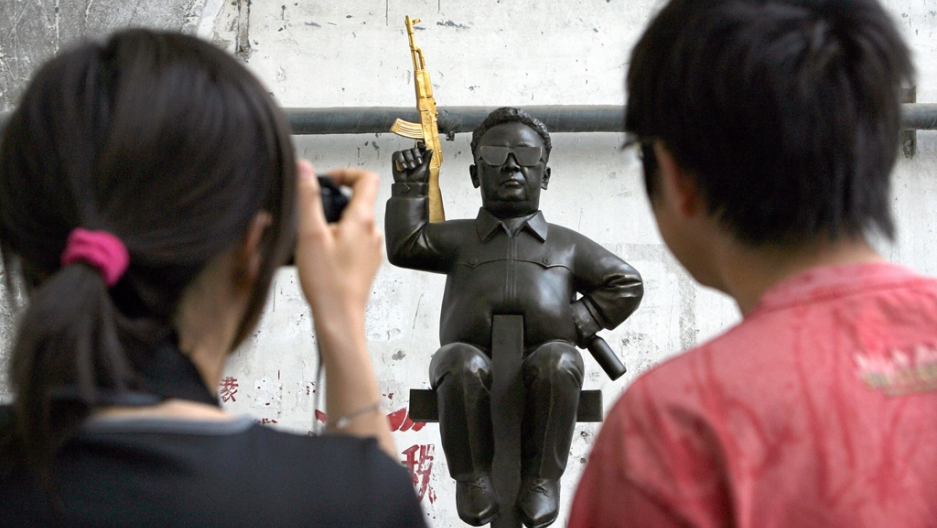 Chinese visitors look at a statue of Kim Jong Il during an art fair in Beijing, on May 6, 2007.
Credit: Teh Eng Koon
Share

Been there, done that.

Wang was a 24-year-old graduate student when Chairman Mao Zedong — at the time the center of a fervent personality cult — died in 1976. He remembers feeling something akin to state-mandated mass misery as he marched down the boulevards of Nanjing in central China to attend a somber memorial service, broadcast nationwide from Beijing 560 miles away.

The images this week of grown men and women in Pyongyang wailing out of control as they mourn for Kim Jong Il bring back memories.

“Some people became emotional. To a certain degree, there was peer pressure to do so,” he said. “During Mao’s time, we were brainwashed. We were educated to love him from our childhood.”

China’s come a long way since then.

Nowadays, it’s tough to indoctrinate people like globe-trotting scientist Wang. “We don’t believe the newspapers and TV in this country. Since the 1990s when the internet became available, I stopped reading newspapers.”

Wang Ping believes, given the malnutrition among the 24 million who live in North Korea, it’ll require “immortal feats” for the regime to survive, much less create prosperity.

On the internet, many Chinese ridicule the dead North Korean leader, the wailing mourners and the Beijing government’s effusive grieving on behalf of “the Chinese people.”

China’s state TV reports that the Chinese and Korean people are deep in grieving, but microblogger Bandao Yanhua noted that “Chinese people and the people around the world are celebrating and applauding.”

In another post, Bandao Yanhua wrote: "You F*** Foreign Ministry. What the hell does the death of Kim Jong Il have to do with me? You may send condolences on behalf of the Chinese government. But you f***er, what qualifies you to represent all of the Chinese people."

Laozei quoted criticisms typically found in western media, but not in China's state-run papers: “He starved so many people to death, prolonged a hereditary feudal system. He deprived North Korean people of their human rights.”

Amid jokes about the dead supreme leader was this irreverent video spoof of a dictator in a Sprite commercial.

“A lot of people in China look down on North Korea because it hasn’t opened up. It’s backward,” said Jeremy Goldkorn, editor of Danwei.com, a website about media in China.

While the Chinese government’s army of internet censors doesn’t allow overt ridicule of China’s top leaders, it’s much more tolerant of Chinese netizens who mouth off about international issues.

That’s not the case with all foreign-policy issues, Goldkorn says.

“When it came to Gaddafi’s Libya, there was a lot of censorship on Sina Weibo,” the popular microblogging service. “It had a lot to do with unpleasant comparisons with China and long-entrenched dictatorial leaders being overthrown by a popular revolution.”

But Pyongyang makes the Chinese government looks like a paragon of success.

The two countries have a lot in common. Both have Marxist-Leninist roots. Both suffered famines within living memory. During the great famine of 1959-61, an estimated 30 million Chinese died. In 1996 North Korea lost perhaps 2 million.

Both have tried at times to shut themselves off from the rest of the world — in China’s case, during the violent factional struggles of the Cultural Revolution from 1966-76.

“The state media says we’ve lost our great friend. But a lot of people in China think of North Korea like a crazy neighbor. Tourists go there to see what China was like during the Cultural Revolution. It's a kind of twisted tourism."

But for older Chinese, like scientist Wang Ping, this is a time for reflection.

After Mao’s death, Deng Xiaoping took the reins of the People’s Republic of China, and pursued a policy of openness and economic development. That paved the way for Wang to join the first group of Chinese to study in the United States in 1980.

Soon after arriving in the US, Wang recalls arguing with American and Taiwanese students in defense of the Chinese Communist Party. Then, several years later, he gradually started to see his country’s shortcomings.

“I would foresee from my experience in China, North Korea could soon change. But I hope it would not be too bloody.”