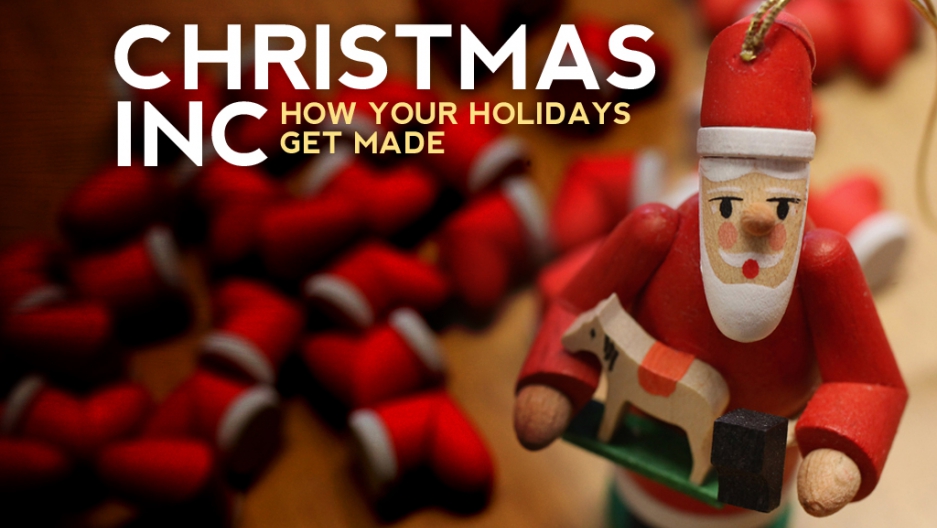 Editor's note: When it comes to the economy, the holidays really do bring us together. Coal mined in South Africa heads to China, where it fuels the plants desperately in need of a little pick-me-up in this economic climate. The stubborn flow of goods persists from there, and even during the dismal European debt crisis, people in France stuff their pockets full of Christmas cheer this time of year. Take the full tour of GlobalPost's "Christmas, Inc.," a series about how your holidays get made.

MEXICO CITY, Mexico — In a crowded market in this seething mountain capital, Christmas shoppers elbowed and tussled past each other to a busy stall selling festive trees.

On the left were trees that were smaller, greener, softer, and grown in forests close to the city.

On the right were drier, taller and sharper trees, which had been imported from the United States and Canada.

“Give me that giant one,” a middle-aged man said, pointing to one of the imports. A stall worker helped the customer hoist a six-foot tree on his shoulder so he could battle through the crowd with it.

“It is a shame, but most people want the bigger, imported trees,” the stall owner Diego Prado said. “The Mexican trees are a good-quality product, but we only sell a few here.”

More from GlobalPost: Inside a Thai Christmas tree factory

US and Canadian Christmas trees have flooded into Mexico in recent years, along with increased North American trade in everything from avocados to artisan liquor.

This holiday season alone, more than a million trees have been imported over the Rio Grande to decorate homes celebrating the birth of Jesus Christ, Mexico’s Environment Department reported.

The imports now outnumber the 700,000 trees provided by Mexican growers this year.

But not everyone sees the southward flow of pines as a welcome present.

Some Mexican farmers and politicians complain they are fighting unfair competition from the wealthy subsidized US plantations.

The issue even reached the Mexican Senate, which on Dec. 16 sent an official request to the Forest Department asking why more support has not been given to Mexican Christmas-tree growers.

The request underlined how more support for Christmas tree farms in Mexico could uplift the local economy.

“These type of plantations are a very important source of rural employment,” the request said, according to Mexico’s government news agency Notimex. “They generate up to 500,000 pesos ($36,000) per hectare (2.47 acres).”

Free trade over the Rio Grande has shot up steadily since the North American Free Trade Agreement was signed in 1994 and tariffs on most products were gradually phased out.

Overall, the United States actually imports more from Mexico than it exports, shipping $163 billion worth of products south, while $229 billion came north last year.
Many car-manufacturing jobs shifted from Detroit to Mexican cities such as Puebla, to the chagrin of American car workers.

Mexican avocadoes are often bigger and juicier than US-grown avocadoes and are the most popular choice in much of the United States.

But when it comes to festive forestry, the northern countries are clearly winning the battle.

Cristian Fernandez, a Christmas-tree producer with a farm in Mexico State, says American plantations are more competitive because they have been producing for a much longer time.

“A few decades ago, only a few Mexicans ever used Christmas trees. But the demand has rocketed,” Fernandez said. “We are expanding production but we can’t actually meet the demand. We are also looking at different species that can compete with the imports.”

Mexican Christmas-tree producers have traditionally grown species of pines and firs that can survive the high altitude and conditions of Mexico’s central mountains.

While sprouting rich, dark-green leaves, the Mexican trees generally grow shorter than US species, such as the Douglas Fir.

The mighty Douglas Firs are so popular in Mexico that they alone accounted for 477,000 of the imported trees this season.

Mexico’s Christmas-tree politics are not only limited to the issue of exports.

Environmentalists complain that the surging demand has also led to illegal loggers chopping trees down from national parks to sell in market places.

Such logging has been particularly detrimental to parks in the green state of Puebla, to the west of Mexico City.

Elias Abaid, representative for the Green Party in Puebla state legislature, urged shoppers to ask their supplier for a certificate to make sure the tree comes from a licensed farm.

“We are inviting people to make this effort when acquiring trees … because this guarantees conservation and production of these species,” Abaid said.

Over in a Wal-Mart outlet — a store that has spread across Mexico — a family marched past both the Mexican and US trees to some plastic Christmas trees, made in China.

The mother, Alberta Aguilera, a 34-year-old architect, said she hadn’t thought about the Christmas-tree politics, but was buying a plastic tree because it is easier, cheaper and cleaner.

“I like real plants and have lots in my house,” Aguilera said. “But why do I want a tree that is going to be dead within a month?”