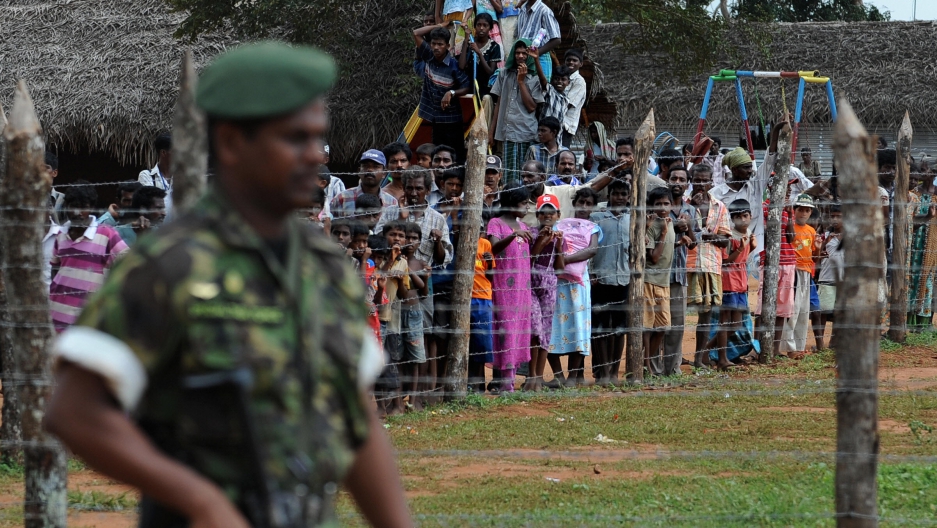 NEW DELHI, India — The Sri Lankan government's efforts to erase from history the final months of its 25-year-long war against Tamil separatists hit a snag this week, as humanitarian organizations blasted the report of an internal probe into alleged human rights violations and possible war crimes as a whitewash.

Now, the fight for clarity, if not justice, may well depend on India.

The Sri Lankan government's Lessons Learnt and Reconciliation Commission (LLRC) posted its report on the last months of the civil war Dec. 16. But despite the government's hopes that the internal assessment would end calls for an international investigation, Human Rights Watch identified “serious shortcomings” in the 388-page report.

Most troubling, the LLRC largely exonerated government forces for alleged violations of the laws of war, Human Rights Watch said.

“The way the war was ended in Sri Lanka must not be made into a positive example that other governments are encouraged to pursue or allowed to pursue,” said Alan Keenan, Sri Lanka Project Director for the International Crisis Group.

“One of the major advantages of an international investigation would be to lay out in a credible way just how destructive that approach was.”

Whether that happens, however, could well depend on New Delhi's new willingness to stand up against bullying from Beijing — which has blocked multilateral actions on human rights.

The LLRC assessment is unlikely to satisfy either the US or India, which had demanded a clear roadmap for establishing accountability for human rights violations committed during the war.

“They haven't called for any specific prosecutions,” Brad Adams, Asia director at Human Rights Watch, said in a telephone interview. “They haven't dealt with indiscriminate shelling. They haven't suggested that anybody senior has any responsibilities. It's actually much less than we expected. We thought that they'd try to do more to try to keep the possibility of an international investigation at bay.”

The United Nations Secretary-General’s Panel of Experts concluded in April that both government forces and the separatist Liberation Tigers of Tamil Eelam (LTTE) conducted military operations "with flagrant disregard for the protection, rights, welfare and lives of civilians and failed to respect the norms of international law."

Yet while the LLRC did rubbish previous government claims that the military killed no civilians at all, it downplayed or failed to investigate incidents involving the shelling of civilians with heavy artillery, sexual violence and the executions of rebels who attempted to surrender.

The apparent whitewash was, of course, not wholly surprising. Both before and after the military push to end the civil war — in which the UN report alleged tens of thousands of civilians may have been killed — the repressive atmosphere in Sri Lanka has made it dangerous to speak out against the government, according to the International Crisis Group.

Yet predictable or no, the LLRC report's many failings have highlighted the need for the international probe called for by the UN panel of experts, humanitarian groups said.

“The challenge is for the United States, and, particularly, India to find the political courage to address these atrocities,” said Human Rights Watch's Adams.

Indeed, it's an important test case for a new era of foreign policy in which China increasingly vies with the US for influence.

Already, China's growing military and economic might has begun to hamper multilateral actions on human rights — largely driven by the United States and Europe. In the last month's of the civil war, China's continued support for the government hamstrung a Western bid to use withholding arms as a way to influence the tactics of the Sri Lankan military. And after the conflict ended, Beijing, along with Moscow, has stymied efforts to push for an international investigation in the UN Security Council.

"What [China's new involvement has] meant is that governments who otherwise might have been willing to push harder on the Sri Lankan government on issues of accountablity but also on other related governance issues like human rights violations and the decline of democratic standards in Sri Lanka have been more reluctant to do so."

Engaged in projects to build a massive port, a highway, a coal-fired power plant and an international airport on the island, China has emerged as Sri Lanka's largest donor of bilateral aid — committing $1.5 billion to the country's $6 billion reconstruction plan in June. Beijing's generosity has made talking tough difficult for the traditional regional powers like the US and Japan — which was previously Sri Lanka's principal donor.

But India's concerns are more immediate. New Delhi sees Beijing's move into the Indian Ocean as part of a so-called “string of pearls” strategy to encircle the country with potential naval and military supply hubs. And taking a tough stance on human rights could well alienate Sri Lankan President Mahinda Rajapakse — likely to remain the country's leader for a long time — and propel him into the arms of Beijing.

“The Chinese penetration of Sri Lanka has made things very difficult for India in recent years,” said Brahma Chellaney, professor of strategic studies at the New Delhi-based Center for Policy Research, an independent think tank. “Without a larger international push, it's not possible for India to act on its own.”

So far, those concerns have prevented India from acting as strongly as humanitarian organizations believe is necessary. Though in bilateral talks New Delhi has expressed its displeasure with Rajapakse's progress in rehabilitating Tamils displaced by the war, for example, its public statements have been carefully measured to avoid causing too much offense. Moreover, India has not supported multilateral efforts to push for action against past and present human rights violations at the UN.

That silence has been nearly as large an impediment as the outright opposition from China and Russia, according to ICG's Keenan. To overcome the resistance, an international investigation will need the support not only of the US and Europe, but also of Japan and India.

A strong statement from India would clear the path for other, smaller countries of Asia, Africa and Latin America to follow suit. And New Delhi's current reluctance resonates just as loudly.

“There's every indication that Western governments are quite willing to do something to have the human rights council take some action on Sri Lanka,” said Keenan. “It's really India that has not yet sent the signal that it's willing to join that coalition.”