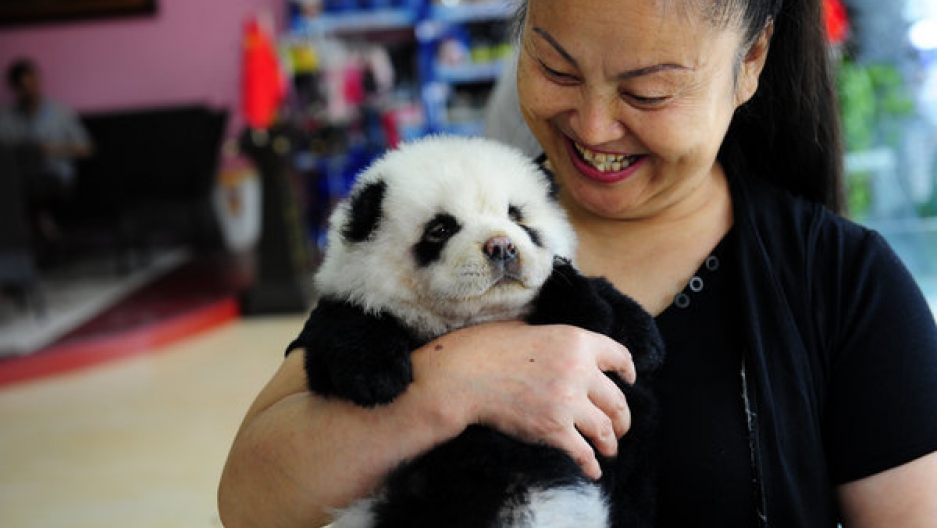 These chow chow dogs have been styled to look like pandas in Xi’an, Shaanxi province on June 18, 2011.
Credit: China Daily
Share

BOSTON — What is better than a good animal story? So here, to brighten your day, are the 10 best animal stories — some cute, come tragic and some unbelievable — of the year.

1) Cute Somali lion cubs saved from smugglers. African peacekeepers in war-torn Mogadishu find two small lion cubs about to be smuggled out of the country. The military men care for the little tykes for a year until a good home is found for them (photos included).

2) Zimbabwe man professes love for a donkey. In court, a Zimbabwean man testifies that the prostitute he picked up one night turned into a donkey. That's why he was caught having sex with the animal. That's his story, and he's sticking to it. He told the court that he still loves the donkey.

3) “Flying rhino” video shows dramatic rhino relocation in South Africa. In an effort to save endangered rhinos from rampant poaching, a wildlife preservation group carries a rhino through the air to a safer location. Amazing images of a rhino flying through the air. Upside down!

4) Canada polar bear fights beaver to be national emblem. It's not an actual fight between the mighty white bear and the enterprising beaver. It is a battle between their human supporters.

5) Lioness saves little cub from cliff. This is a real heart warmer. A mama lioness is determined to save her cub who fell over a cliff.

6) Pygmy elephant gores tourist to death in Australia. Elephants are not native to Australia, and it looks like this pachyderm lost his temper and took it out on a tourist.

7) Wooly mammoths to be cloned by scientists. Wooly mammoths used to roam the earth. But they've been extinct for a few millennia. No matter, scientists have found some well-preserved DNA and they want to clone a new one. What could go wrong? Ever hear of Jurassic Park?

8) Tigers on the loose in Zanesville, Ohio. The owner of a private zoo that ran up a lot of debts, let all his animals out of their cages and then killed himself. The animals rampaged through the Ohio countryside, until police tracked them all down and shot dead all but six of the animals. Sad.

9) Dogs dyed to look like pandas. Apparently some Chinese are not content to have really cute little dogs. They want the canines to look even cuter so they have the dogs' fur dyed to make them look like pandas. Who knew?

BONUS: Bear found asleep in New Jersey basement. That's right, a cable guy goes down in the basement and starts fixing a faulty cable. But then he sees the bear.