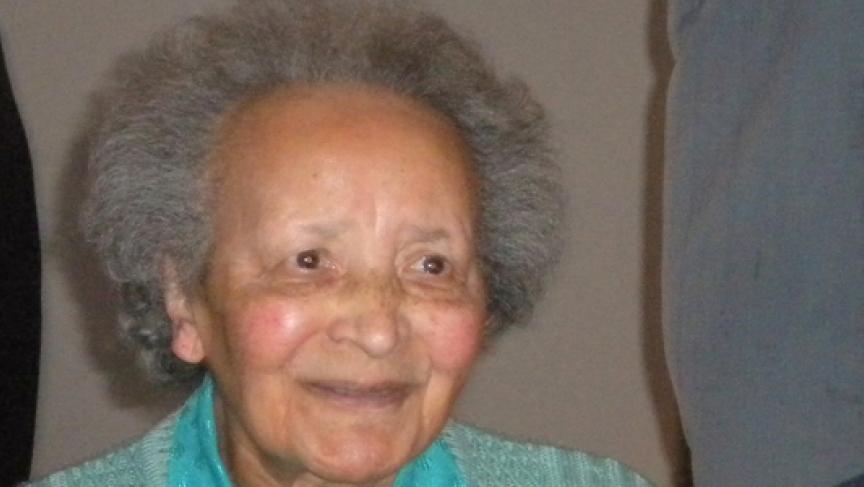 Share
Sixty seven years ago today, the Battle of the Bulge, the largest and bloodiest battle of World War II, began in the Ardennes area in Belgium. The town of Bastogne was at the heart of that fight. Through the years, many stories of heroism emerged from Bastogne, but none quite like the one military historian Martin King tells of a 4’ 8” volunteer nurse who was born in the Belgian Congo. King says that to fully understand her story, you have to understand the battle. So, he drives me around Bastogne in his battered Ford minivan. At one point we pass a memorial commemorating Easy Company, 101st Airborne Division -- the guys made famous by “Band of Brothers.” Before long, King and I leave the van and go on foot through the trees. The temperature drops, as cold rain and sleet begin to fall. King tells me that these are the very woods where Easy Company was dug in back in December 1944. The ground is still marked by deep craters. “What I find remarkable,” King says, “is that 67 years after the fact, you can still quite clearly see the foxholes here.” Originally from Scotland, King has lived and worked in Belgium for thirty years now. He’s interviewed countless veterans, and co-authored a book called “Voices of the Bulge.” This, he tells me emphatically, was the scene of some of the most ferocious front line action in the Battle of Bulge. But he says to get the real flavor, you have to imagine it with two feet of snow, the ground frozen solid, and the fog so think you can’t see five feet in front of you. “And the Germans,” he notes, “would have been a few hundred yards away.” The German shelling and bombing of Bastogne were horrific back in December, 1944. Allied medical supplies and personnel were hard to come by. Some locals, though, volunteered to help as nurses. You might remember that in HBO’s “Band of Brothers” mini-series, there’s a scene set in Bastogne. In it, a white Belgian nurse chats with an Army medic outside an aid station. They’re discussing another volunteer, a black nurse. “Where’s she from? The black girl?” asks the medic. “From the Congo,” answers the white nurse. It turns out that “the black girl from the Congo” is not a fictional character. Her name's Augusta Chiwy, and hers is one of the great untold war stories, says historian Martin King.

“Augusta’s story is the most incredible thing I ever heard,” King tells me. “You can take the hero story - he did so much that day, and shot all those people, and he had big guns. But this, to me, had something else. It had a humanity that I'd never come across.” Augusta Chiwy was born in 1921 in the Belgian Congo. Her father was a white veterinarian, originally from Bastogne. Her mother was Congolese. At the age of nine, her father brought her to live with relatives in Bastogne. Then, at age 19, Chiwy went to study nursing in the city of Leuven. In December of 1944, her father invited her home to Bastogne for Christmas. “The snow, oh, the fog!” Chiwy recalls. When she arrived in Bastogne, the town was firmly in American hands and the front was some miles away. A few days later, though, the German advance left Bastogne surrounded. Chiwy and her family stayed in town, hiding in the basement like many other residents. And then, a few days before Christmas, there came a knock at the Chiwy’s door. It was US Army medic Dr. John Prior, known as “Jack.” “Jack Prior arrived at the house,” Chiwy says, “and he told me that he had no one left, that his ambulance driver had been killed.” So, Chiwy volunteered as a nurse, working at the makeshift first-aid station in town. When her own clothing became bloody, she even donned a US Army uniform. Then, she volunteered for something much more dangerous.

"The Germans Had it Zeroed"

Every fifteen minutes, chimes ring out from the US war memorial that stands on the top of Mardasson Hill outside of Bastogne. The sound is meant to remind visitors of the sacrifices made by American soldiers. Not 200 yards away from the memorial is a field which was very much the front line back in December, 1944. Chiwy, Martin King tells me, jumped onto the back of a two and half ton Army truck with Dr. Prior and two litter-bearers. They drove from Bastogne to this spot. And there, King says, Chiwy risked everything to help the wounded US soldiers. “She was actually running out into this field,” King says. “And the Germans had it zeroed. They were hitting it with 88s, and mortars and heavy machine gun fire.” “And Augusta tells me that the ground was being raked up around her as she was trying to retrieve the bodies.” There were other hazards for Augusta Chiwy besides the intense gunfire, though. Bastogne had been, until recently, under German occupation. “If the Germans captured her,” King says, “they would have shot her immediately as a collaborator.” And the fact that Chiwy was black, King notes, would not have helped matters when it came to the Germans. “It was an incredible risk,” says King.

“We Heard Something Screaming Towards Us”

On Christmas Eve 1944, the aid station in Bastogne where Augusta Chiwy has been working iwas hit by a German bomb. More than two dozen US soldiers, and Renee Lamaire, another volunteer nurse, were killed. You can find the spot where the aid station stood not far from Bastogne’s main square. It’s now a Chinese restaurant. Outside, a plaque commemorates those who died when the aid station was bombed. Renee Lamaire is mentioned, but not Augusta Chiwy. King tells me that some books about the Battle of the Bulge say Chiwy died in the explosion. But historian he didn’t buy it, and he was so intrigued by the story that he went looking for her. A few years back, a contact in the Belgian army told King that Chiwy was still alive. Eventually, King found her living comfortably in a retirement home just outside Brussels Slowly, he got her to tell the story of how she survived that bomb blast in Bastogne. In a documentary made a few years ago, Chiwy remembers the night the aid station was hit. She was sipping champagne with Dr. Jack Prior in a building next door. “So a bottle of champagne was opened, a glass was passed around,” Chiwy says on the video. “And I don't remember if he finished filling the glass, but we heard something screaming coming towards us, and then big bang and all the windows were blown out.” Chiwy was blown through a wall, but survived. After the explosion, she simply got up and started helping Jack Prior tend the wounded. She continued to volunteer until the Germans were pushed back, and the siege of Bastogne ended.

For years, Augusta Chiwy went for long stretches of time without speaking about her war experiences. Martin King says that today, she’d probably be diagnosed with post-traumatic stress disorder. But the more King coaxed out of her, the more he realized Chiwy should be honored for her service. He wrote letters to the US Army, and to the Belgian King. It has finally paid off. Earlier this year, Chiwy was honored by King Albert II of Belgium. And earlier this week, the US Army did its part for Augusta, now “Lady” Chiwy. In a ceremony in Brussels, Chiwy was given the US Army’s Civilian Award for Humanitarian Service. Colonel JP McGee, who currently commands the “Bastogne Brigade” of the 101st Airborne Division, presented the award to her. “M’aam, you embody what is best and most kind in all of us,” McGee said. “It is an honor to share the stage with you and to be able to say on behalf of US veterans everywhere -- thank you. The number of lives that you touched is incalculable. There are men and women in America who would never have a father or grandfather if you hadn’t been there to provide them basic medical care.” During the ceremony, Augusta Chiwy smiled, blew kisses and waved to her family in the audience. Afterwards, amid the applause, I asked her if she was happy to be honored, almost 70 years after the fact. “Yes,” Chiwy told me. “See, I’ve had a good life. I’ve got my children, and my grandchildren.” “And,” she added, pointing to her head with a smile, “I’ve still got my marbles.” As historian Martin King told me: “America honors its heroes. It just needs to be reminded sometimes who those heroes are.”