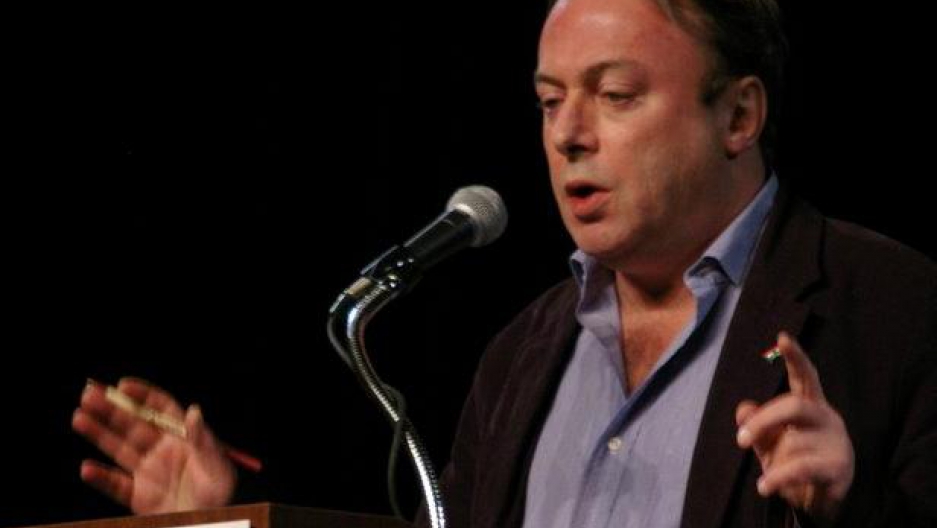 Christopher Hitchens died on Thursday. He was 62. (Photo by ensceptico, via Wikimedia Commons, cc-by.)

Christopher Hitchens once described his concept of the afterlife as "like living in North Korea."

Now, he'll know if in fact that's the case. Hitchens, 62, died Thursday in Houston of esophageal cancer. A popular essayist and author, no one was too prominent or too revered to be at the other end of Hitchens mens. He wrote on former Secretary of State Henry Kissinger, Mother Theresa and, he even took on organized religion.

In "The Trial of Henry Kissinger," Hitchens accused him of being a war criminal.

"Most of Henry Kissinger's policies actually issue in calamity, farce, fiasco, disaster. Indochina, for me the most prolific failure in the history of American foreign policy. Everybody loses. Everyone is worse off than when they become," Hitchens said then.

British politician Denis MacShane called Hitchens a cross between Voltair and George Orwell. Hitchens, for himself, had another Brit in his mind when talking about his favorite people: Winston Churchill, who stood his ground against Hitler while others tried appeasement or simply turned and looked the other way.

"We have everything to fear, including fear itself, and the bad news hasn't even hit yet," Hitchens said, quoting and expanding on the famous quote by President Franklin Roosevelt, a close ally of and contemporary of Churchill.

Hitchens loved to talk, and loved to expose those who he viewed to be intellectually weak. Once, he was discussing the relative merits of the defense of Kuwait with Charlton Hesston on CNN. Hitchens asked Hesston if he could name the neighbors of Iraq and Hesston could not, winning the argument and the day.

But as Hitchens aged, he softened, if only a bit. His memoir, Hitch 22, was published in 2010 and served to try and tell his own version of his own story. It was during his book tour that he found out he had cancer. Initially, he wrote it off as merely fatigue. Hitchens discussed his memoir with To The Best of Our Knowledge as well.

"There's an expression, I woke up feeling like death. I've had that. This was not like that. My thought, maybe I'm dying," Hitchens said, shortly after his diagnosis.

He was. And on Thursday, he did.