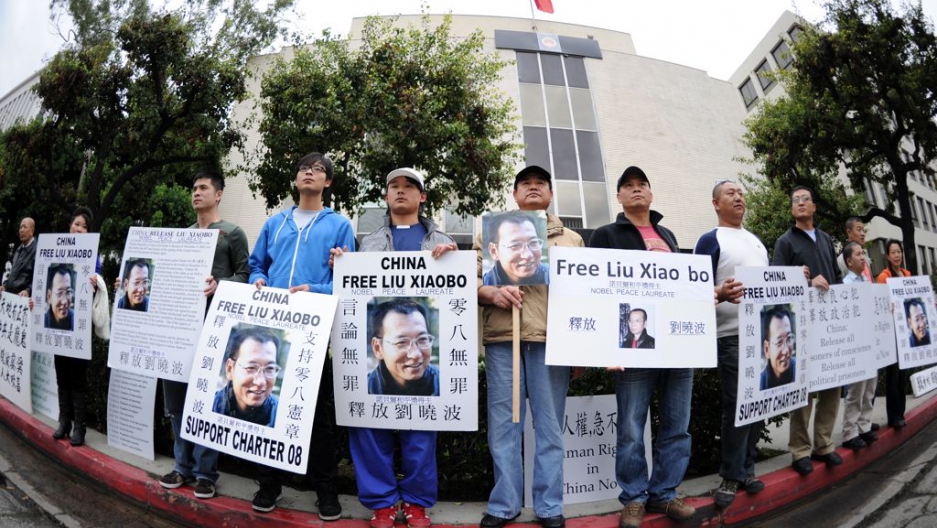 Protesters outside the Chinese consulate in Los Angeles in December 2010, demanding the release of jailed Nobel Peace laureate Liu Xiaobo. It is not known what Thursday's protest was about.
Credit: Gabriel Bouys
Share

A man has been arrested after allegedly firing on the Chinese consulate in Los Angeles.

The suspect, said to be an Asian man in his 60s, handed himself in to police and has admitted the shooting, Xinhua news agency reported.

Several rounds were fired at the Chinese Consulate-General building in downtown LA Thursday afternoon. No one was reported hurt.

The shooter is believed to be one of a group of protesters who were gathered outside the consulate, according to the LA Times. An argument broke out between one of the group and a security guard, who allegedly confiscated a sign the man was holding and threw it into the trash.

The protester then got into a vehicle and fired a total of nine shots at the guard, all of which missed and several of which hit the consulate building.

Security officer Cipriano Gutierrez, who was in the guard booth outside the consulate at the time, gave this account to Reuters:

"There was a gunshot at me, directed towards me, so I hit the ground. I was dodging bullets. I saw a hollow-point bullet land right next to my knee cap. I was grabbing the phone books, trying to cover my head."

Officials have not given details of what the protest was about.

The consulate remains under tight security.

The Chinese foreign ministry has asked the American government to take "concrete measures" to protect Chinese missions and staff in the US, spokesman Liu Weimin told Xinhua.