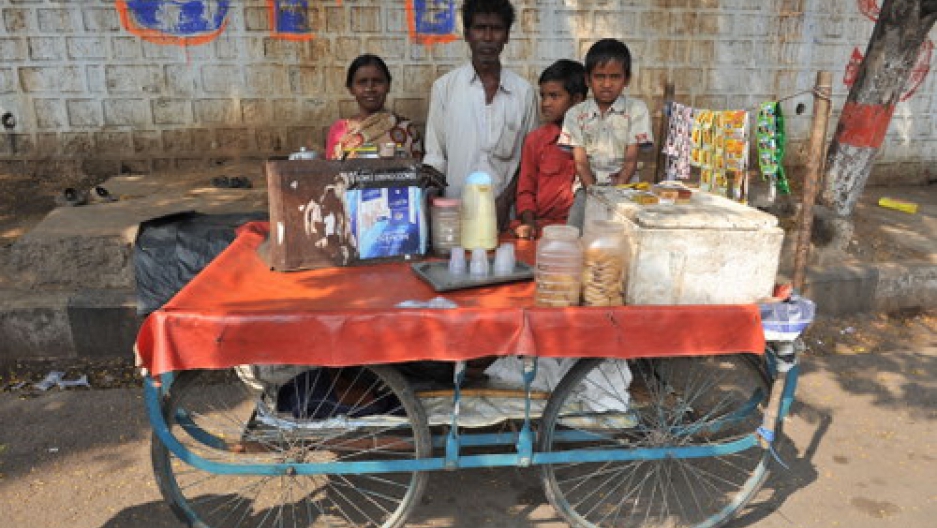 Poor Indians like these street vendors in Hyderabad may have to wait longer than expected to realize the Great Indian Dream, as most indicators hint that the world's second-fastest growing economy is slowing down.
Credit: NOAH SEELAM
Share

It's never fun coming back to New Delhi from Bangkok.  But this year I returned to unusual forebodings.  Perhaps for the first time over my decade in India, there are real concerns that the once-booming economy might be hitting a roadblock.

We've already heard that growth dropped below 7% for the first time in two years in the most recent quarter.  Now, the rupee is spiraling out of control -- setting new record lows against the dollar practically on a daily basis.  Industrial output contracted 5 percent in October, the most recent month available.  And during the quarter ended that month production of domestic capital goods shrank 25 percent, compared with growth of 21 percent in the same period of 2010.  The Hindustan Times says it means we have "our bucks to the wall," citing the disastrous effects of paying in dollars for the oil needed to run the economy as those dollars get more and more expensive.  (Hey, for me, it means I got an unexpected 18% raise this month, compared with last year).

As one analyst told the Globe and Mail:

“I can’t see a single positive factor for the rupee except for support from the Reserve Bank of India, which is also likely to be limited in the absence of depth of foreign exchange reserves and already-tight rupee liquidity,” said Moses Harding, head of asset-liability committee at IndusInd Bank.

If there's a spark of good news, it's that inflation finally dipped below 10 percent last week. But so far nobody expects the Reserve Bank of India to ease up on interest rates, top tycoons are wagging their tongues about pulling their money out of India and setting up shop abroad (seriously), and there's little sign that the political gridlock stopping further reforms to open up the economy is going to end anytime soon.

The Age puts it baldly: The most recent figures show economic growth has dipped below 7 per cent and there has even been speculation of a return to India's pedestrian growth before the early 1990s reforms swept away many stifling economic regulations.

Speaking with Bloomberg Wednesday, Prime Minister Manmohan Singh said he hopes to revive plans to raise the cap on FDI in multibrand retail to 51 percent this March -- despite being forced to cave to opposition last week.  And he made the bold claims  that gross domestic product will increase 7.5 percent in the fiscal year that ends March 31, while inflation will cool to between 6 percent and 7 percent, according to the news agency.  "Once the global economy stabilizes," (whenever that might be) India will return to 8.5 percent to 9 percent trend growth, Singh told Bloomberg.

Personally, I wouldn't write India off yet, either.  Don't call your broker on my account -- or blame me for future losses -- but here's my layman's prediction.  The rupee will slide awhile longer as foreign institutional investors (those are the guys that the protesters are calling the 1 percent) pull money out of India....  Then prices will get low enough that those same guys will start pumping money back in, and, voila, prices will go back up again as the influx of money from the experts sparks demand / confidence.

A half-baked theory, I'll admit.  But I've got a good name: It's called "India as ATM."