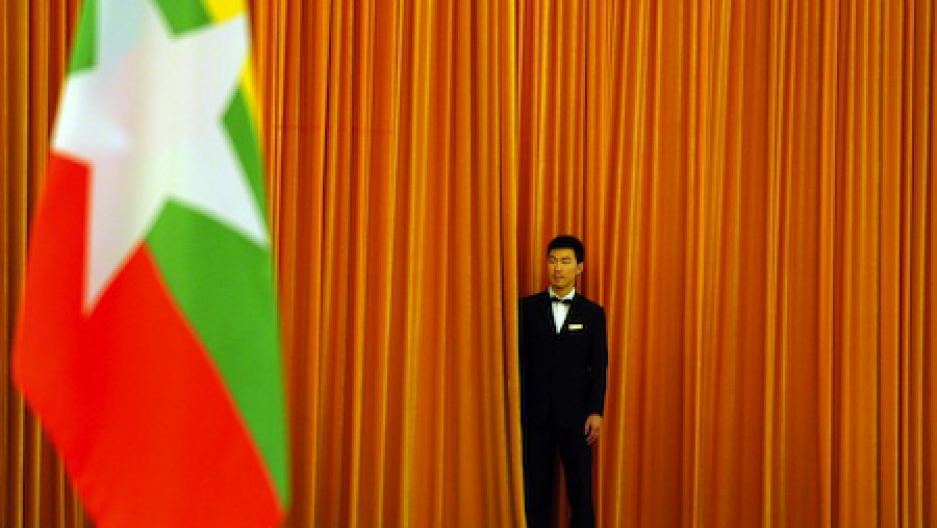 A security guard stands in front of curtain near the flag of Myanmar ahead of a welcoming ceremony for visiting President Thein Sein hosted by his Chinese counterpart Hu Jintao on May 27, 2011 a day after his arrival in China for a visit aimed at improving his impoverished country's commercial ties with its key ally, the world's second-largest economy.
Credit: FREDERIC J. BROWN
Share

Among the many misconceptions about Burma (officially called Myanmar) is that its mighty protector, China, is loathe to see Western sanctions disappear.

China, so the thinking goes, has gleefully expanded its foothold in Burma while U.S. or European interests are held at bay.

Some Chinese investors may feel this way, but it's certainly not official policy.

State-run media outlet China Daily has repeatedly noted that Beijing hopes to see U.S. sanctions lifted. Western investment in Burma could very well stoke a larger economic revival that could benefit everyone with a stake in the impoverished country -- including the Chinese.

America's Burma envoy has again tried to cool the perception that America is reaching out to Burma to weaken China, Reuters reports. If this engagement ultimately leads to the repeal of Western sanctions, that could very well please China as well.

These days, both Burma's and China's eagerness to see these sanctions disappear is palpable. China, through its foreign minister, repeated a call for sanctions to end in a briefing earlier this month.

And as a recent op-ed in the China Daily put it: "...the decades-long sanctions imposed by the US and the United Nations have hurt Myanmar's economic development and compromised its people's livelihoods. Hence, it is normal and understandable for Myanmar to expect the sanctions to be lifted with the improvement of ties with the US."