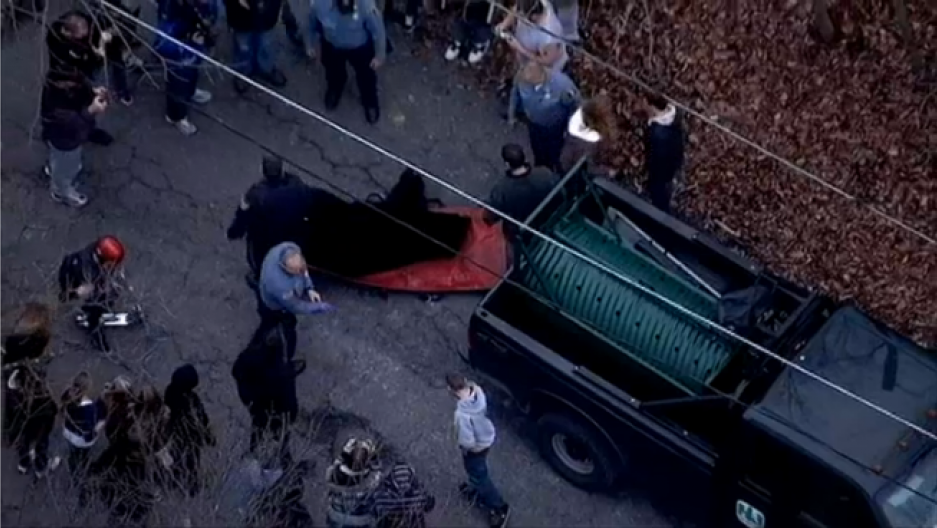 Animal control officers struggled to get the bear back to sleep once it had been woken up, but eventually managed to tranquilize the animal and remove it safely.
Credit: NBC New York
Share

In a twist on the Goldilocks tale, a cable repairman found a bear sleeping soundly in the basement of a New Jersey home Wednesday.

Rumors that the bear sought alternative sleeping quarters because a small blonde girl was dozing in his bed are, as yet, unconfirmed.

The animal had been spotted in the Hopatcong neighborhood earlier that day, according to the Associated Press, where it had wandered the streets before picking the residence for its nap spot—presumably because it was not too small, not too big, but just right.

On a call-out to a local home, cable guy Dave Cornine first noticed something was up when he heard a growl, he told WTVR. His drilling must have woken the bear up, he believes.

Not realizing the sound had come from a 500-pound black bear, he carried on working. When the growling continued Cornine investigated with his flashlight and promptly "freaked out," he said.

He fled the property and called for help. New Jersey Fish and Wildlife officers arrived shortly afterwards and shot the bear with tranquilizer darts—but the shock prompted the animal, by now all too awake, to take off into the surrounding streets.

It was on the loose for 45 minutes before the tranquilizers kicked in, to the delight of onlookers.

"Big time bear chase and there’s nothing better than a bear chase. But I hope it comes out to a good ending because this is one of the most beautiful animals I’ve seen in the history of probably Hopatcong—he’s beautiful. He’s the biggest girthy bear I’ve ever seen."

The bear was eventually knocked out and removed. He will be tagged and released onto state property, animal control officers said.

More from GlobalPost: Pennsylvania woman scares off bear to save dog