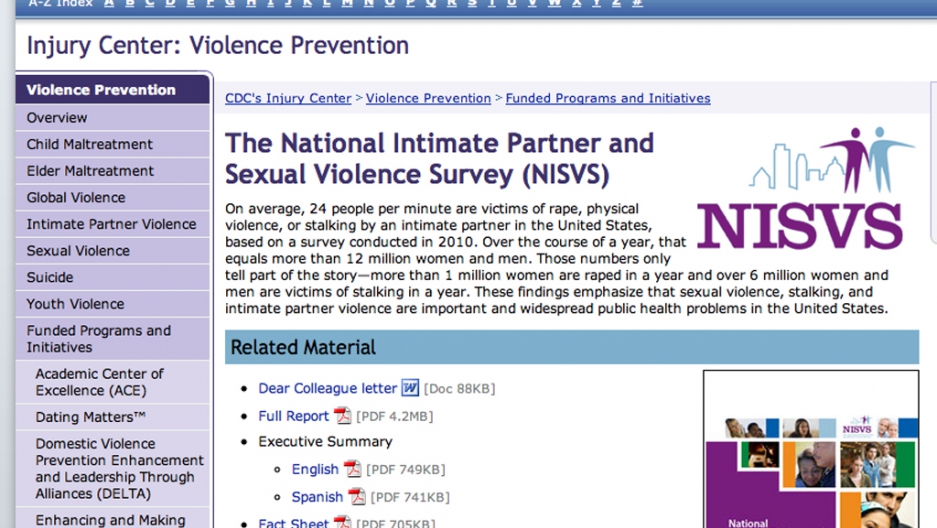 A new study found that almost 1 in 5 American women have been victims of rape or sexual abuse.
Share

Nearly 1 in 5 American women have been victims of rape or sexual abuse, according to a groundbreaking study by the Center for Disease Control.

The study found that almost 12 million men and women are affected by sexual assault in the United States each year; that means 24 Americans are raped or abused every minute.

The data comes from the National Intimate Partner and Sexual Violence Survey (NISVS), a public health tool which put together a random telephone survey of 9,000 women and 7,400 men, according to TIME Magazine. The NISVS started in 2010 with the support of the National Institute of Justice and the Department of Defense, and it aims to become an annual, ongoing study of sexual violence in America.

"This landmark report paints a clear picture of the devastating impact these violent acts have on the lives of millions of Americans," U.S. Health and Human Services Secretary Kathleen Sebelius said in a statement, according to Reuters.

It is the first survey to provide national and state-level data on the problem; the Center for Disease Control called it the first of its kind. Alaska, Oregon and Nevada had the highest percentage of women who had been raped, Reuters reported.

The surveyors also collected information that had not been looked at in other national surveys, including studying sexual violence other than rape, psychological aggression, coercion and control of reproductive and sexual health, and the physical and mental health of violence survivors,The New York Times reported.

More from GlobalPost: Pennsylvania liquor board pulls ad that suggess connection between date rape and alcohol

One in four women surveyed reported having been beaten by an intimate partner, and one in six women have been stalked, according to the report. One-third of American women said they had been victims of a rape, beating, stalking, or combination of assaults.

Sexual abuse also affects 1 in 7 men, who said they have experienced severe physical violence at the hands of a partner. Both male and female victims of rape of abuse were more likely to report poor physical and mental health; common health problems include frequent headaches, chronic pain and problems sleeping, the study found.

“That almost one in five women have been raped in their lifetime is very striking and, I think, will be surprising to a lot of people,” Linda C. Degutis, director of the National Center for Injury Prevention and Control at the CDC told the New York Times. “I don’t think we’ve really known that it was this prevalent in the population."